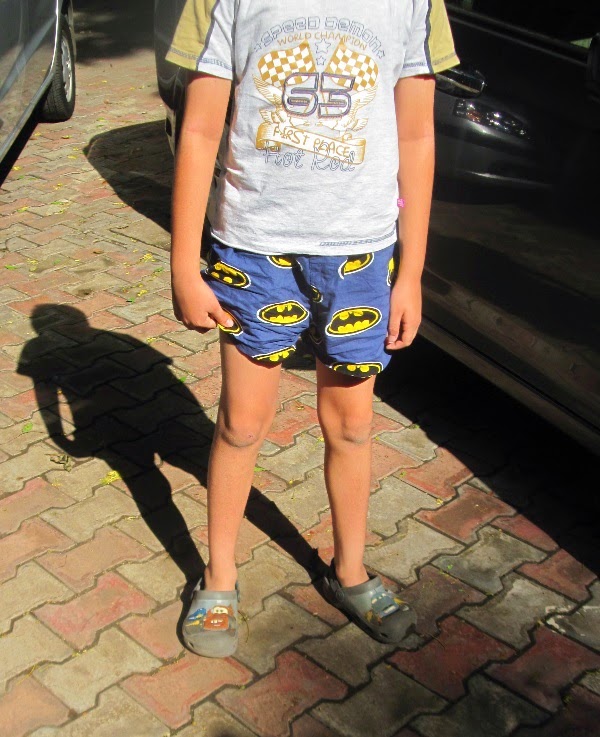 One thing that can never leave us- the earthlings- any time the Sun is up in the sky- is our shadow, which is always with us. We may go anywhere on the surface of our planet, yet our shadow would be always there. As soon as the dawn breaks in, a long shadow to the west, welcomes us. It keeps getting shorter and shorter till noon. After noon, the shadow, now falling to the east, gets longer and longer till sunset, when it suddenly disappears.

The shadow however does not fall exactly to the west in the morning and east in the evenings: it also falls little towards south or north, depending the location of the person on the surface of this planet. For northerners, the shadow never goes southwards and so also for southerners from the southern hemisphere it never goes towards north. For people staying in equatorial regions of northern hemisphere, it goes to the south on some days of the year and to the north on some days of the year. Our ancestors had realised long time ago, importance of this simple phenomenon, to find out many things; the time of the day and surprisingly the period of the year. The shadow also would tell them, where they were on the planet's surface? Whether to the north or in the south? 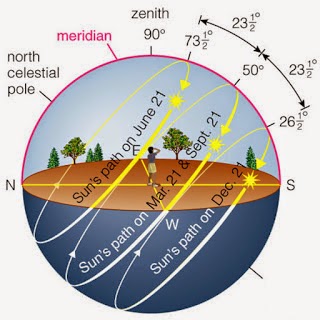 Everyone knows that earth rotates around the sun and completes one rotation in an year. The earth also rotates around itself, creating a day and a night. The earth's axis of rotation actually is not parallel to the axis of rotation of the sun. It is slanted or tilted at an angle of 23.5 degrees to the sun's axis. This slant is the most important thing for us, because it gives us the seasons. Because of this slant, there is an apparent motion of the sun in the earth's sky, towards north for six months and towards south for six months.

For an observer on earth, standing anywhere north of 23.5 Degrees from equator, the sun always looks little south of the zenith at noon and for a person standing south of 23.5 degrees south from the equator, the sun always appears to the north of zenith, though how far it is north or south depends upon the period of the year and observer's own position. We can therefore draw two imaginary circles on surface of the earth that are parallel to the equator. One that is 23.5 degrees north, commonly known as Tropic of cancer and another one 23.5 degrees south, commonly known as tropic of capricorn.

My home town Pune in Maharashtra state of India lies exactly at 18.52d N and 73.86d E. Because of this location, except for a brief period of about 2 months, the sun always appears to the south of zenith at noon. Only during these two months, the sun appears to the north of zenith at noon. It also means that only on two days in a year, the sun appears exactly overhead or at zenith at noon. One of the day happens to be today or 14th May. Other day would follow in July. (Though I have said that overhead appearance of sun is at noon; it is to keep things simple. It does not happen exactly at noon in Pune because local time at Pune is 31 minutes behind the Indian standard time fixed for 83.5 d N longitude.)

Coming back to the shadow play, it also means that a person standing up under the sun here in Pune today at 12:31 PM, IST, would find his shadow missing. Something that can never happen otherwise. Many of the readers are likely to feel that all this is primary school geography. True! Yet I am mentioning here to highlight it's importance because, when none of the time keeping instruments of today were yet to be discovered, our ancient ancestors kept track of time and day by using this simple geographical phenomenon. 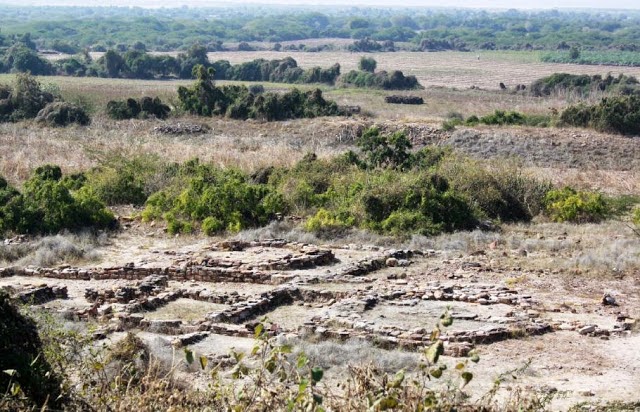 One of the most significant geographical facts about Dholavira is that it lies exactly on the tropic of cancer or 23.5 d north of the equator. This would mean that for 364 days of the year, the sun would be seen at Dholavira to the south of zenith at noon local time. Just on one day, which would fall on the summer solstice day (21st June), the sun would be seen exactly overhead at noon and there would be no shadow at all.

Marking off this day must have been extremely important for inhabitants of this metropolis, perhaps for two reasons. Firstly, because it was located in an extremely arid landscape with very little rainfall, the city had to know, when to expect the rains. If they could exactly pin point the summer solstice, they would know that they could expect the rain in next few weeks. The second reason for pinpointing the summer solstice day, was because Dholavira was a port city in the present Rann of Kutch. The water levels in the Rann, during summer were probably too low for the ships to navigate even then. But after rains, the rivers emptying into the Rann would start flooding it. The water level would rise and make it possible for the ships to navigate easily. 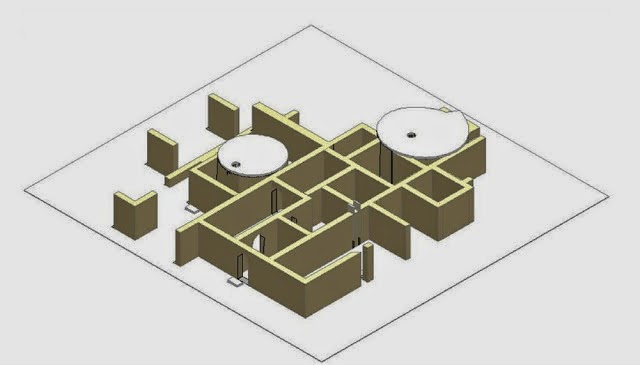 How Dholavira people were able to mark the all important summer solstice accurately, probably would have remained a mystery, but for a chance discovery of two circular structures by two scientists: Mr. M N Vahia from the Tata Institute of Fundamental Research (TIFR), Mumbai and Mr. Srikumar Menon from Manipal School of Architecture and Planning (Karnataka). A group of of scientists now say that this discovery is the first identification of a structure used for observational astronomy during the Harappan Civilisation or in other words, these two circular structures was a functional astronomical observatory, with help of which, Dholavira people were able identify days of solar calender such as summer and winter solstice and use that information to conduct business, farming and other activities.
According to these two scientists, the circular structures, out of this complex 13 room structure, were designed for non-residential purposes. The exact purpose of these round structures was to find precisely the days of summer and winter solstice. These two circular structures probably had a flat roof with an circular opening. Authors say that a bright spot of light would fall on the floor along with its shadow. By interpreting this image and shadow, Dholavira people could exactly find out the days of summer and winter solstice.

If a wonder struck child today calls his mother on a particular day and excitedly tells her: Look Maa; no shadow! I see no reason to belittle him or her. This was exactly how, our ancestors had also discovered the simple geographical phenomenon and a child's wonderment perhaps is the reminder that it is the curiosity of a man that has made all of mankind's progress possible.