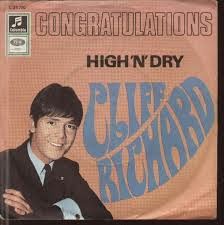 This week we have another single from Cliff Richard;"Congratulations." The song was the UK entry in the Eurovision Song Contest of 1968 with Cliff Richard performing. The song was immediately popular in the UK and became a number one single. Cliff Richard also performed the song as part of the commemorations for the 50th anniversary of VE Day in 1995, despite its having been written long after end of World War II.


If you can not see the embedded video on your android devices, here is the link. http://youtu.be/us3dQ0nnlHY You can also copy and paste the link in your You Tube App. If that also does not work, search You tube, Cliff Richard, Congratulations