It's raining cats and dogs; sorry! Fishes, in Sri Lanka 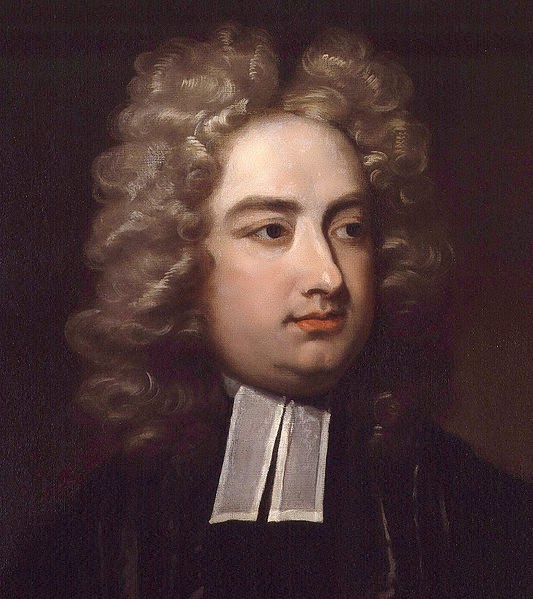 There is a well known English idiom that says; It's raining cats and dogs! Which simply means that it is raining very heavily. No one really knows though, from where this strange idiom has originated. The earliest use of this idiom probably is found in a book written around 1740 by English author Jonathan Swift*, who had also penned a poem: A Description of a City Shower: in 1710. This poem goes on something like this:


Researchers  say that the originator of the cats and dogs idiom therefore is likely to be this author Jonathan Swift himself and he was perhaps quoting an expression, he himself had created earlier, when he talked about out pouring of cats and dogs. I can assure the readers therefore, who might be feeling disgusted, that 'raining cats and dogs' just means that it's raining heavily and does not mean literally that.

If raining cats and dogs means raining heavily, if I dare to say: It's raining fishes! What could it really mean? Well! In this case, it is no idiom and if we have to go by the experience of some villagers in Sri Lanka, it literally means that precisely. 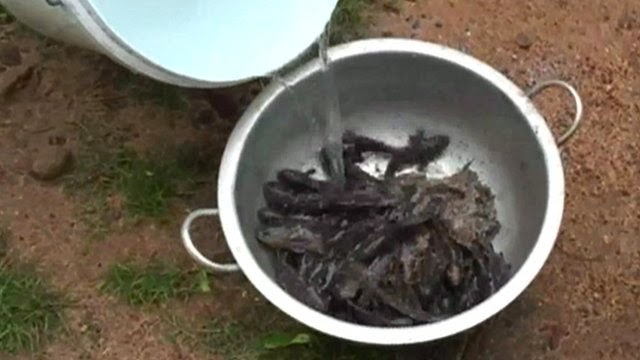 On Monday, 5th May 2014, villagers living in the district of Chilaw in Sri Lanka heard something heavy falling along with the rain. Worried, they left their homes to find out what was happening. To their utmost surprise and delight, they found scores of small fish- each three to five inches (5cm-8cm) in length- falling on the village green, roads and roofs. The fish rain was plentiful and abundut as total weight of fish that were collected by villagers exceeded even 50kg (110lbs). Most of the fish were alive, when they hit the ground. Villagers put them in buckets of water and later had a real feast, when they ate them. 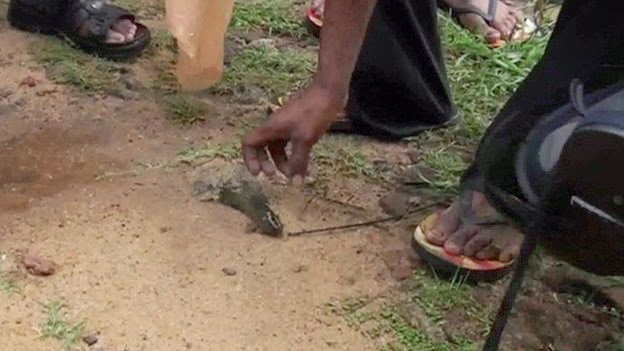 Scientifically, this fish rain can be explained easily. This unusual event was most likely caused by a tornado, which is a complex meteorological process that causes a rapidly rotating column of air that spins out from the base of storm clouds. Such tornadoes can act like giant vacuum cleaners sucking up any material in their path. When swirling whirlwinds over relatively shallow water, it develops into waterspouts and sucks in almost anything in the water including fish, eels and even frogs. The marine life can be carried over long distances by buffeting clouds even when the waterspout stops spinning, keeping them alive all the time. Tornadoes are known to form when large differences in both temperature, humidity and wind speed and direction occur. 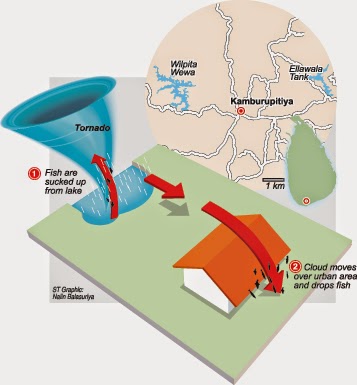 Some of the world's most devastating tornadoes happen in US. But the tornadoes there usually form, well away from any large water bodies and that is why, no fish ever get sucked up. The stronger tornadoes in US also tend to form over lands where huge temperature and humidity differences are seen very often.

In 1912, Sri Lanka had three occurrences of such special rains. A prawn rain first and then yellow and red meteor rains. Sri Lanka has a long coast line when compared to its landmass, being an island. Sri Lankans love there fish and Fish is a valued commodity. No wonder that Villagers in the Chilaw district of Sri Lanka, were more than happy to have free meal sent to them by nature.

* Jonathan Swift ( 1667 – 1745) was an Anglo-Irish satirist, essayist, political pamphleteer (first for the Whigs, then for the Tories), poet and cleric who became Dean of St Patrick's Cathedral, Dublin.He is remembered for works such as Gulliver's Travels, A Modest Proposal, A Journal to Stella, Drapier's Letters, The Battle of the Books, An Argument Against Abolishing Christianity, and A Tale of a Tub. Swift is regarded by the Encyclopedia Britannica as the foremost prose satirist in the English language. (Information source-Wikipedia)