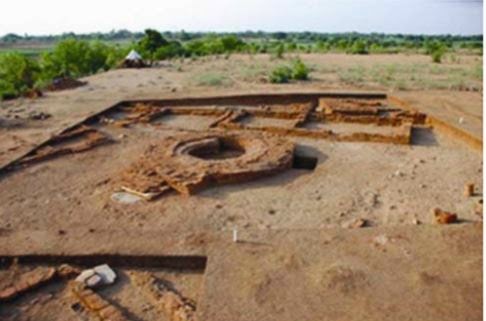 Kondapur is a small village in the Medak District of Andhra Pradesh state in India. About 1 km south of this village, there is a small hillock or a mound about 11 meters tall. The famous British archaeologist Mr. Henry Cousens, then working with Archaeological survey of India, first explored this site in first decades of the of twentieth century. Later in 1941-42, Department of Archaeology of the erstwhile Hyderabad State under H.E.H. the Nizam of Hyderabad, started excavation work at this site under the leadership of G.Yazdani and came to conclusion that it was a Buddhist site after collecting evidence of stupas and other Buddhist structures. However, they excavated the peripheral areas only leaving the middle mound intact.

The Archaeological survey of India, again took up the excavation work in the years 2009-10 and 2010-11, on a sprawling area of 81 acres and have now come to conclusion that actually the site is an important milestone from a period that began two centuries before, and ended three centuries later, from beginning of our era. The entire region, where this site is located is commonly known as the Deccan and during this period, it was ruled by Satavahana kings, who until demise of the great emperor of India, Asoka, were vassal kings under him. After his death they declared independence and set up their own empire of the Deccan. 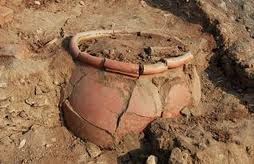 For first two or three hundred years, Satavahana kings ruled from Pratishthan (todays's Paithan city) from Marathawada region of the present Maharashtra state. Due to unknown reasons, they appear to have shifted their base eastwards, though the exact location of their new capital remains unknown.

Around 200 CBE, after demise of 3rd Satavahana king Satkarni, his queen Nayanika had got inscribed a huge epigraph about the king, in the cave of Naneghat in western Ghat mountains of India. This inscription clearly states that though, it was a golden period of Buddhism in India, Satavahana kings were Brahmins and followed Vedic religion. In fact, Naneghat inscription clearly lists the Yagnas ( ritual of sacrificing things to fire on an altar.) that were performed by the late King as a proof of his dedicated and religious frame of mind.

Even though, we have proof that Satavahana kings followed Vedic traditions, little was ever known about their traditions. Another thing that was missed was any kind of evidence about the Gods, whom people from Satavahana period worshipped. 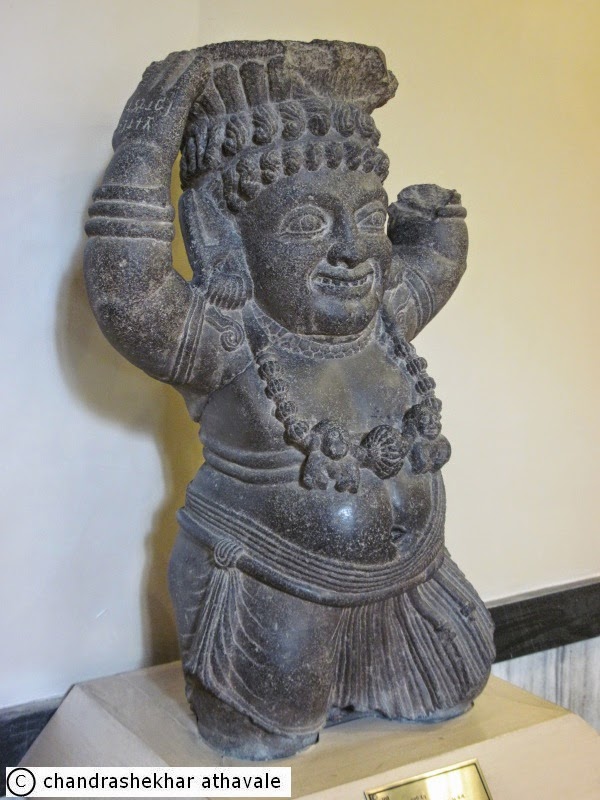 In one of the rock cut temples at Pitalkhora from that period, a statue of a demi-God known as Yaksha was discovered. On one of statue's wrists, still intact, the sculptuerer has carved his name as Kanhadasa or servant of Krishna, thereby indirectly confirming, that worshipping of Krishna was being practiced in those years. Except for this little bit of evidence, very little was known about the Gods whom Satvahana people worshipped. 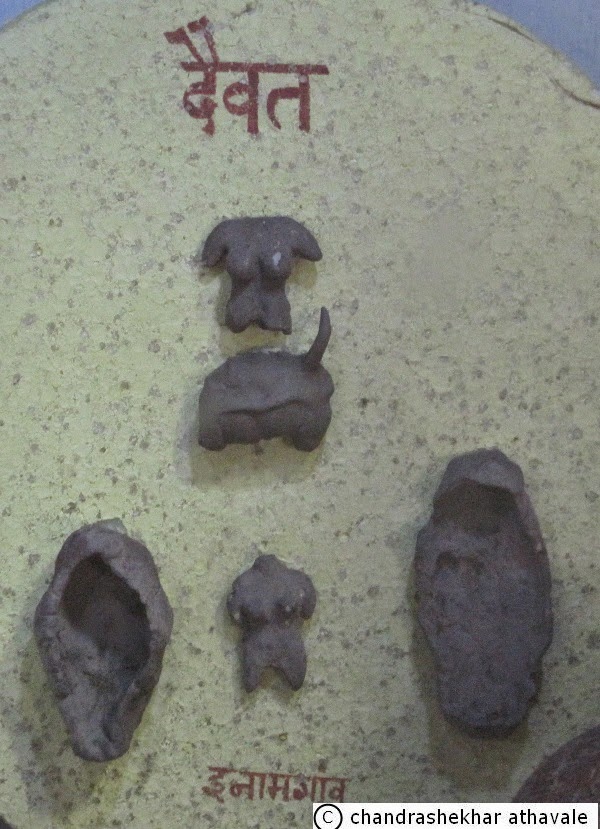 Archaeologists have found that in the Deccan area, human settlements have been in existence even more than a millennium before the Satavahana period. Extensive exploration work has been carried out by Researchers of the Deccan college from Pune, at several places like Jorwe, Inamgaon and Diamabad. Conclusive evidence has been unearthed that proves that these people worshipped mother Goddesses. An eminent archaeologist M.K.Dhawalikar writes in his book “Environment and Culture,” and I quote:

“there is very definitive evidence that the Jorwe people worshipped mother Goddesses, one with head and other without head. The all powerful mother is represented by well baked figurines, whereas unbaked ones may have been worshipped on certain occasions only. Small figurines of mother Goddess placed in pit silos were obviously connected with fertility. The one with blind holes over her body was probably connected with smallpox. But far more interesting is the discovery at Inamgaon of a clay box containing a female figure and over the box was yet another but without head and a bull, all unbaked. It is interesting to note that a figurine without head is presently worshipped by the Warlis, a tribe in western India near Bombay. They call it the “Palghat,” which in their language means the position of a woman at the time of child birth. She is connected with child birth and fertility. ”

The new excavations done at Kondapur now, have brought to light religious practices of people living in Deccan at the beginning of our Era. The new series of excavations are headed by G. Maheswari, Superintending Archaeologist, Archaeological Survey of India, with a team of about 15 members. Some 45 labourers have been hired to excavate the ancient remains with utmost care. The main discovery at the excavation site includes some brick structures found in the western extreme of the main mound, which yielded authentic evidence of a Vedic or fire worshipping sect. It's a vast complex having a circular shrine facing south with one entrance and surrounded by rectangular chambers and fire altars , three metres in depth, having 37 courses of burnt bricks of different shapes -- triangular and sand clock-shaped, behind the chambers. These supposedly fire altars have yielded significant evidence of fire activities in them along with five numbers of pots stamped with impressions of a trident. Apart from this, the whole temple complex yielded plenty of animal bone pieces, perhaps for sacrificial purposes and related pottery articles such as bowls, sprinklers, spouted vessels and iron implements like spear heads and knives. The kings obviously performed the ‘yagnas’ at these altars and sacrificed animals to propitiate the goddess or seek a male heir. A lime and clay image of a Brahmin, probably the Raja Guru, with a thick sacred thread, embracing the king, along with many silver and gold-plated coins and terracotta seals bearing images closely resembling Roman Emperor Tiberius have also been found. This image shows clearly the status enjoyed by Brahmin priests.

Did the Satavahana period people worship any idols besides Vedic sacrifices at the fire altar? Kondapur excavations provide a clear cut answer. In the vicinity of the circular structure, images of nude women adorned with jewels, which are known as Lajja Gouri (Goddess of fertility) have been found with a few cult objects made of iron. This clearly proves that the goddess of fertility was worshipped here.

M.K.Dhawalikar, whom I have quoted above, says in his book and I quote:

“ It may be noted that sculptures of of a nude Goddess without head but with legs spread apart occur in the Deccan from the 2nd Century BCE onwards. They are presently worshipped by barren women with a view to procuring an offspring. They can be identified as reprtesentations of Goddess Shakhambari, a form which Goddess Durga is said to have assumed in order to ward off a 100 year famine.” 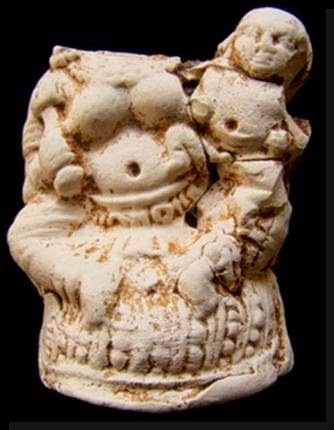 Kondapur excavations are really significant because firstly they throw light on religious beliefs and traditions of the people in the Deccan living at the beginning of our era. Even more important than that is the fact that the cult of Goddess of fertility, followed by people of Indus civilization first and then followed by the Chalcolithic cultures of the Deccan, was still followed by the people in Satavahana period and still continues to be followed by certain tribes and people of today.