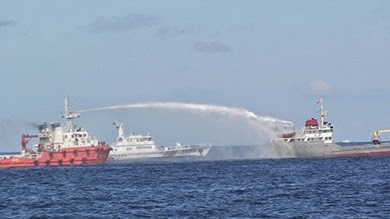 Perhaps emboldened by the actions of its western neighbour in Crimea, China made a major move last week in South China Sea, after years of tough talk and bullying around with smaller peripheral ASEAN nations. On first of May, Vietnamese vessels on patrol, discovered a Chinese oil rig stationed 130 nautical miles off the coast of Vietnam. It was about 119 nautical miles off Ly Son Island in Quang Ngai Province. According to Vietnam, it was a clear violation of Viet Nam's sovereignty. On 4th May 2014, when Vietnamese patrol boats tried to intercept the Chinese oil rig, Chinese escort ships with air support, intentionally collided and rammed two Vietnamese Sea Guard vessels and fired water cannons at Vietnamese vessels, causing damage. At least six Vietnamese sailors have been injured in the past few days. 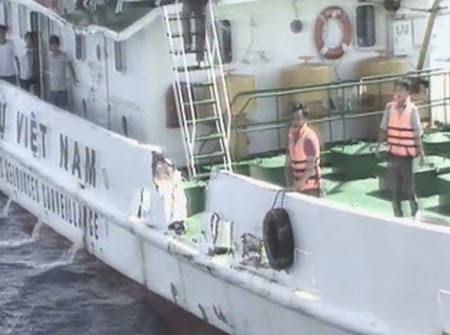 As Vietnamese demanded the removal of the rig, instead of defusing the situation, Chinese further increased the complications by dispatching 80 ships to the area, including seven naval vessels. Dozens of navy and coastguard vessels from both countries are now in the area, where China has deployed the giant rig. For any one, who is familiar with Chinese tactics, it would be clear that Beijing is trying to impact its foot print in the area for the first time. China perhaps is the only country in the world, which has territorial disputes not only with many of its neighbours, but also with countries that are located far away from its borders. Besides major overland disputes with India and Vietnam, Chinese having been claiming almost entire South China Sea as its own territory and even some islands presently held by Japan in East China Sea.

China has taken an official stance that it has sovereignty over all of the South China Sea, which happens to be an important sea lane for global commercial traffic. Chinese maps show an imaginary dashed line with 9 dashes that encloses about 90 percent of the 3.5 million square kilometers of South China Sea as part of China. Even though this line was first claimed by Chinese Government in 1947, no other country objected to it then. Chinese Government submitted a territorial claim for the area of the South China Sea, falling within the 9- dashed line, on May 7, 2009 to the UN. Immediately, the Philippines lodged a diplomatic protest against China for claiming the whole of South China Sea illegally. Vietnam and Malaysia filed their joint protest a day after. As things stand, Chinese claim is being contested not only by Vietnam and Philippines but by other ASEAN countries like Taiwan, Brunei and Malaysia. Indonesia joined this group when China extended the range of South China sea disputes even further last year by claiming part of Indonesia’s Riau Islands province as its own territory by including it into its so called 9 dash line.

In spite of all the claims made by it, China had never tried to station any ship in the disputed parts of the sea, though Chinese ship continued to sail through often. With last week's action, China's strategy of maintaining status quo and only launching verbal claims, seems to have undergone a major change. International experts also note the fact that the Chinese have moved ahead in placing their oil rig immediately after President Barack Obama’s visit to four Asian countries in late April. This clearly shows Beijing's intentions to test the resolve of Vietnam, other ASEAN members and above all Washington.

China might have calculated that with developments in Ukraine, Nigeria and Syria, Washington may be unwilling to back up strong security assertions made to Japan and the Philippines during President Obama’s trip. An oil industry official in China, on condition of anonymity, confirms this when he says that the decision to position the rig appears to be a political decision rather than a commercial one. He adds that this decision reflects the will of the central government and is also related to the U.S. strategy on Asia. 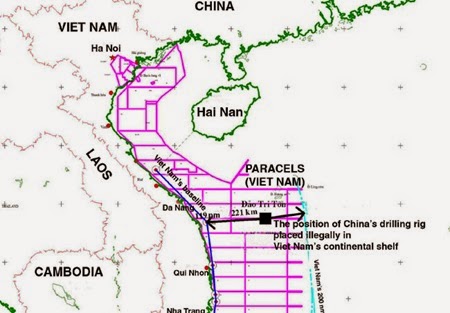 After it noticed the Chinese rig, representatives from the Foreign Ministry of Vietnam met representatives of the Chinese Embassy in Ha Noi and handed over a ministerial diplomatic note to the Chinese Foreign Ministry. The note affirmed that the activities of China's drilling rig HD-981 and vessels seriously infringed on Vietnam's sovereignty, sovereign right and jurisdiction over Viet Nam's Hoang Sa archipelago, exclusive economic zone and continental shelf. They also seriously violated agreements reached by the two countries' leaders and went against the spirit and wording of the Declaration on the Conduct of Parties in the East Sea (DOC) and related regulations in international law. The note demanded that China "immediately withdraw the drilling rig, vessels, equipment and personnel from Lot 143 in Viet Nam's continental shelf and prevent the recurrence of similar acts."China did not pay much heed to Vietnamese concerns, as can be seen from subsequent developments.

Considering the fact that Vietnam stands no comparison with China's naval might, only thing it can do is to make enough noises by taking the matter to international arbitration. Since Chinese move is a political one and not commercial, the future depends on how Americans respond to the situation.

This week, another ASEAN Summit is likely to take place in Myanmar. Considering this fact, it is obvious that China has posed a challenge not just only to Vietnam but to entire ASEAN community that the South China Sea belongs to it. Much would now also depend upon how ASEAN members respond to this challenge since all of them, except for Cambodia are affected by the Chinese action.