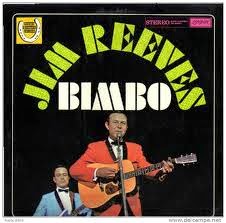 James Travis Reeves (1923 - 1964) was an American country and pop music singer-songwriter popular in the 1950s and 1960s, who also had gained a wide international following. He was so popular that his songs continued to chart for years following his death at age 40 in a private airplane crash.

Reeves version of Bimbo became his second No. 1 song on the Billboard magazine country chart in January 1954. In those days it was an extremely popular number and could be heard continuously running in jukeboxes around the world.


If you can not see the embedded video on your android devices, here is the link. http://youtu.be/8acGK5lPhzA You can also copy and paste the link in your You Tube App. If that also does not work, search You tube, Jim Reeves, Bimbo