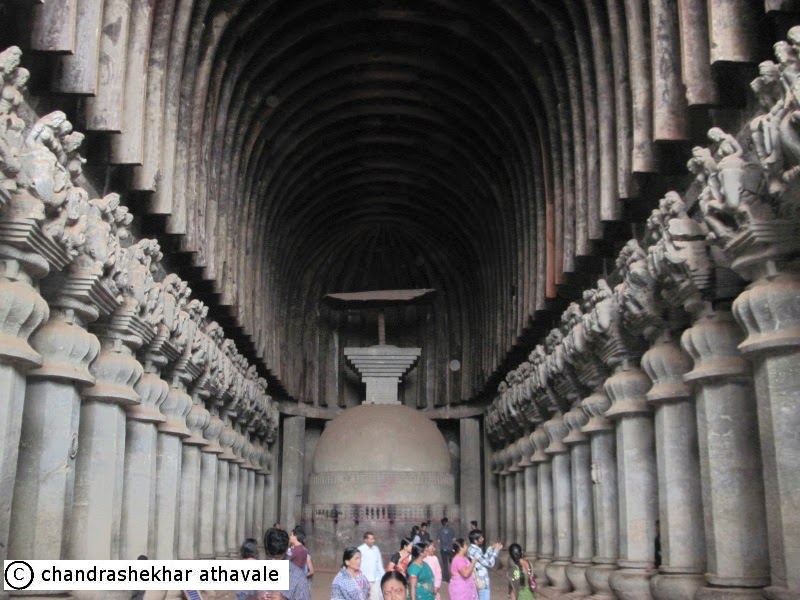 We saw earlier that in the large number of inscriptions, carved on the walls and pillars of the Buddhist rock cut temples of Maharashtra state of India, there is a fair sprinkling of inscriptions done at behest of donors, who call themselves as 'Yavanas.' These 'Yavanas' have been found to be essentially people from Greece or Rome or Greco-Roman origins. Samuel Clark Laeuchli has taken pains to make a list of inscriptions of such 'Yavana' donors, though only from two cave monasteries located near Karle'n and Junnar, which I reproduce below. The list therefore is not exhaustive and can be considered as only a representative one.

1.Gift of an upright of the Yavana from Dhenukakata

2.This Pillar is the donation of the Yavana Sihadbaya from Dhenukakata.

3.This pillar is the donation of the Yavana Yasavadhana from Dhenukakata

4.This Pillar is the donation of the Yavana Culayakha from Dhenukakata

5.This Pillar is the donation of the Yavana Dhamadhaya from Dhenukakata

6.This Pillar is the donation of the Yavana Citasagata from Umehanakata

7.The Gift of two cisterns by the Yavana Irilasagata

8.The gift of a dining hall to the Samgha ( group of monks) by the Yavana Citasagata

9.The gift of a facade by the Yavana Camda

This list, gives us names of a few persons of Greek origin, living in Deccan region of India, who are surprisingly very secretive and have not given any details about themselves or their professions, except for the fact that they are 'Yavanas.' This looks like a certain military discipline and is radically different from other donors, who give information about themselves and their professions etc. The questions that come to mind naturally are, who are these persons? Why were they living in India, far away from their country of origin? And finally, why would they donate large sums to a Buddhist monastery in a foreign land? Before we try to find out answers to these questions, it would be important to note two historical facts, which have direct bearing on the presence of 'Yavanas' in India.

Firstly, all major Buddhist rock cut temples such as those at Karle'n, Bhaje, Shelarwadi, Bedse etc. were located near the junctions of major trade routes and a vast number of small caves were dug near minor trade routes. This raises another question as to with whom, the trade was being carried? Luckily records from Gracco-Roman accounts such as those written by the Pariplus and Ptolemy clearly indicate that the trade was carried with Greece as well as Rome and the goods arrived at the trade ports that lay on the west coast of India. These trade posts were mostly up the creeks and estuaries of rivers to the extent navigation permitted. Ports which lay in the vicinity of these Buddhist caves in the Western Ghat mountain ranges can be listed as Broach (Bhadoch) Sopara (Nala Sopara), Kalyan and Choul.

Secondly, the period in history, about which we are trying to discuss, was politically an extremely unsettled and war-torn one. The Satvahana empire was going through a terrible low, as forces of Saka Satrup Nahapana under generalship of his son-in-law Usavdata, had earlier captured most of the Satavahana territories around these monasteries, though, Satavahana king Goutamiputra Satakarni, in a decisive battle, had won back later most of his kingdom, by end of first century CE. Perhaps parts of coastal regions around Bhadoch, Kalyan and Sopara were still controlled by Nahapana's forces, leaving Chaul port as the only option for Roman ships to anchor.

Samuel Clark Laeuchli reasons out that 'Yavanas' must have been the mercenaries and military figures associated with Nahapana's forces and were living in the Deccan, as long as Saka Satrup Nahapana was in control of it. He has based this conclusion from the fact that these donors were very secretive and did not divulge any information about themselves in the inscriptions. On the other hand, many others, including D.D. Kosambi and M.K. Dhavlikar believe that 'Yavanas' were essentially traders, who handled India's trade with Rome. However in either case, it is clear that, who were these 'Yavanas' and why were they were residing in the Deccan.

D.D.Kosambi goes on to suggest that Buddhist monasteries in the Deccan had so much of wealth that they were able to offer many services to the 'Yavana' traders such as security, sanctuary and banking facilities. It all means that Yavanas, like other traders, were in a very close relationship with the monasteries and helped them to the extent possible.

We now come to the subject proper and try to find out whether traders, who had close relationship with the Buddhist monasteries could have any way influenced the works of art displayed on walls of these monasteries. Sushma Trivedi, a research scholar, rightly points out in her research paper ' Impact of trade on early art of India' and I quote:

“Creation of art is not an isolated event or an independent happening, totally unrelated lo its surroundings, but is interconnected with and nurtured by a variety or human activities such as economic, social and political. In reality, the economic condition is the most important cause of social changes of a given society and these in their turn arc reflected in the contemporary art. Thus in a deeper analysis evolution of art is closely connected with changing economic patterns..... A change in nature of economy brings a change in the patron class, in socio-religious institutions and ideologies, which in turn create new requirements and fresh opportunities for the emergence of new forms and content in art.”

She gives an example of the an early Buddhist structure, the Stupa of Bharhut, which was decorated with the simplest of art forms. However as Buddhist structures started getting a new class of donors, who essentially were private individuals, the tastes of this new class of donors, along with the general social conditions imparted some new interests and aesthetic values lo the art forms. D.D.Kosambi has rightrly described this new change in following words while describing Karle'n monastery.

“The sculpture is beautiful, even voluptuous, of handsome couples of opulent men and women, dressed in the height of style, riding horses and elephants; hardly what one would expect is an assembly place for monks,but precisely what a rich merchant would have liked.” 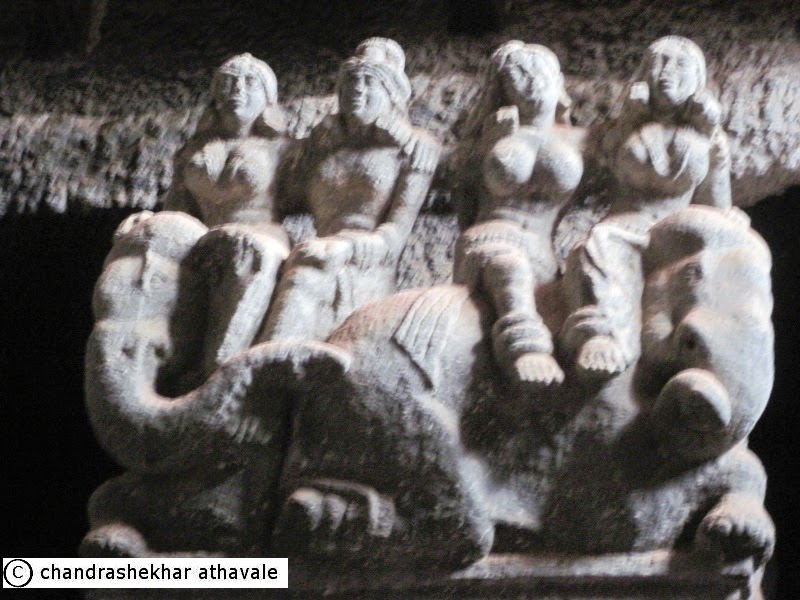 Extending this logic to the case of 'Yavana ' donors, who might have been either mercenaries or traders, it is easy to imagine a little scenario, where a “Yavana' has agreed to handover a handsome donation to the monastery in return for some services offered. The monastery might have offered him to carve his name on one of the walls. Supposedly, he wanted to remain anonymous, for whatever reasons, the monastery might have then agreed to carve or create a bass relief of something that was dear to his own heart; a figure from the Greek Mythology. So in the Great Chaitya hall at Karle'n monestery, with 24 grand pillars with capitals decorated with handsome couples of opulent men and women riding horses and elephants, Sphinxes are also carved out on 2 of the capitals, as acknowledgment for the donations received. A scenario entirely plausible, according to me.

I think that this is how the Greek mythological figures were introduced in the Buddhist rock cut temples. Just to placate or make happy some 'Yavana' donors, who were coaxed in giving huge donations to the monastery. 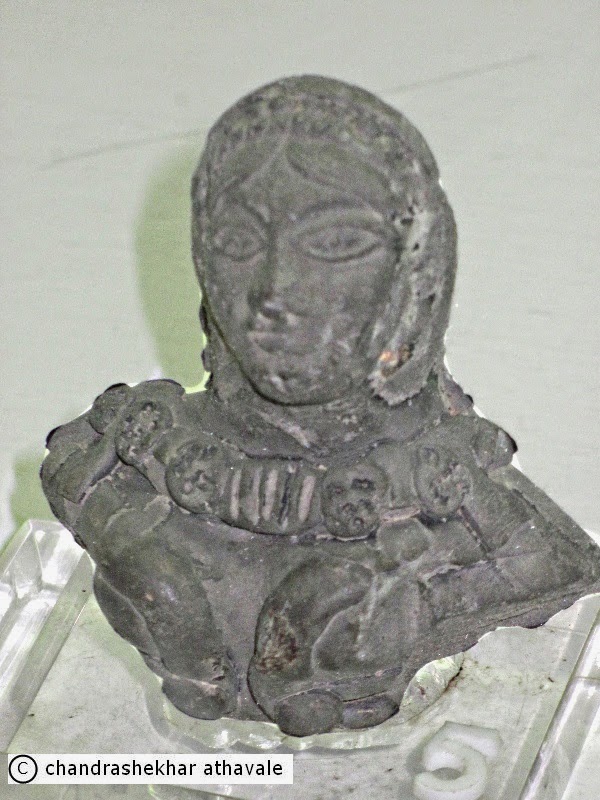 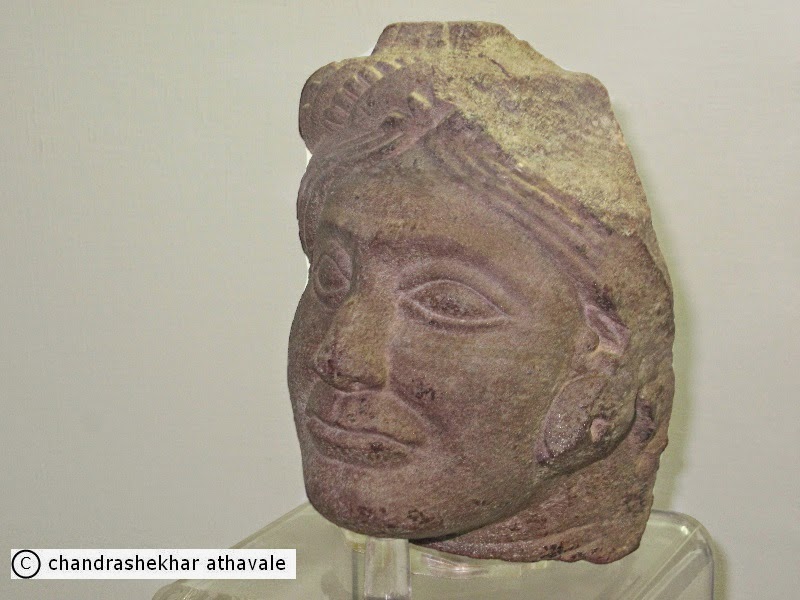 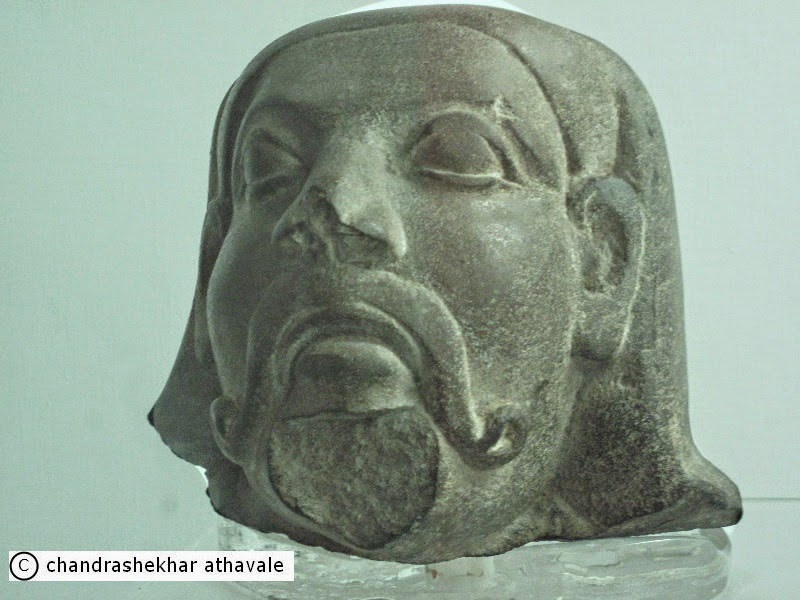 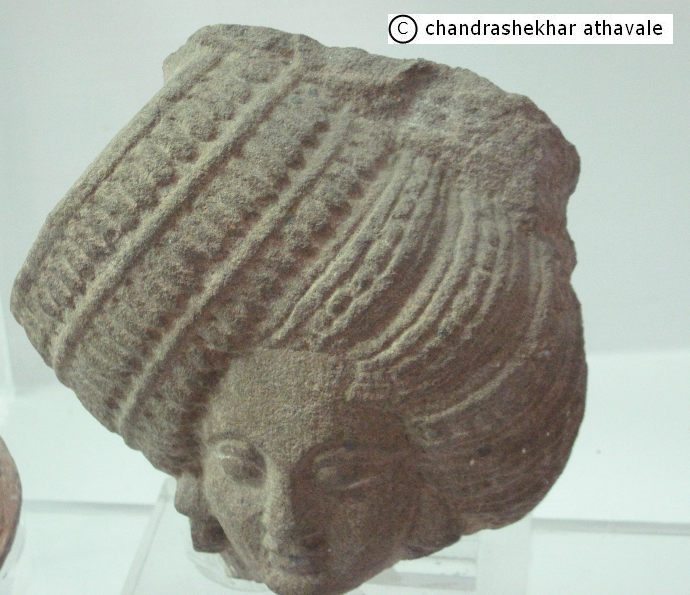 Examples of sculptures from Mauryan period
( Pre-Greek arrival, 300 BCE)
(Was there any real Greek influence on Indian arts?)

Alfred Charles Auguste Foucher might probably have seen too much into similarities between Greek and Gandhara arts to consider and name it as great Greek influence on Indian art in his over zeal to name everything as of European origin. Henry Heras perhaps was right after all, when he said that The so-called Greco-Buddhist school of Gandhara was not at all influenced by Greek models or by Greek ideals. As far as Buddhist Rock cut temples are considered, it must have been a simply fulfillment of a small wish form a major donor to the monastery.