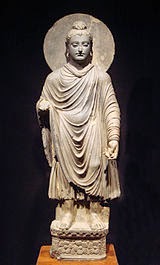 Alfred Charles Auguste Foucher (1865–1952), was a French archaeologist scholar, who first came up with idea that the Gandhara (the region to northwest of India) school of art, reflected Greek influences. His ideas were essentially based on the striking similarity between some of the works of art from Gandhara with those from Greece. No doubt, he had number of facts supporting this hypotheses like invasion of Alexander the great through the north western frontier of India and existence of Greek kingdoms in Afghanistan. 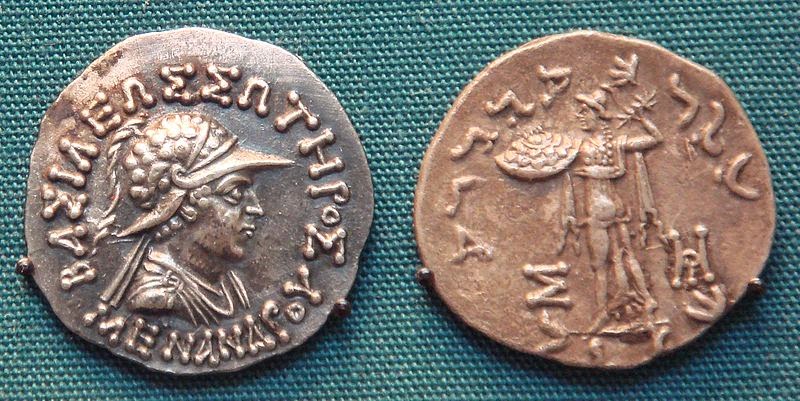 King Menander's coin; Greek Goddess Athena on other side

Foucher reasoned that fifty years after the invasion of Alexander the great, in year 326 BCE, a Greek king Demetrios, son of Euthydemos, took advantage of the break up of the Mauryan empire and conquered whole of northern India. Soon after this, Demetrios lost Bactria(part of present Afghanistan) to a rebellion and was left only with nothing more than his Indian conquests, and became known as King of the Indians. Under rule of his successors for a century and more, the Punjab became a Greek colony. Foucher suggested that Greek arts influenced the Indian arts during the reign of these Indo-Greek kings and even suggested that during the reign of King Menander (known also as Milinda) between 155 and 130 BCE, Buddha's image was created as an Indianized figure of Greek God Apollo. 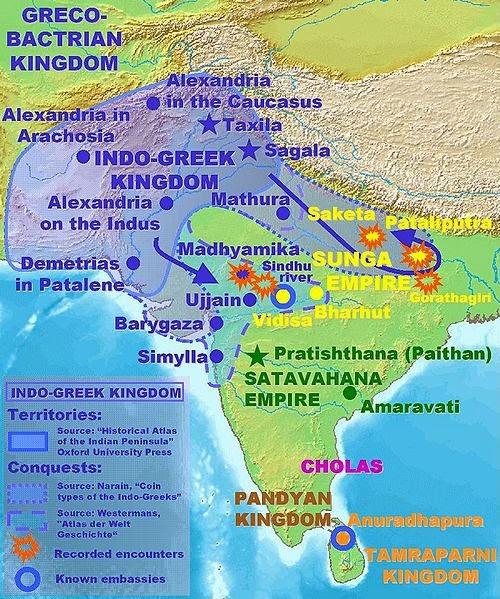 Foucher's hypotheses was strongly refuted by Henry Heras ( 1888- 1955), who was a Spanish Jesuit priest, archeologist and historian in India. In a research paper written in 1936, Heras felt that Foucher's hypotheses may not be on right track after all. He gave following reasons for this and I quote:


(Note: This was written in 1936, when Aryan invasion theory was very much in vogue) 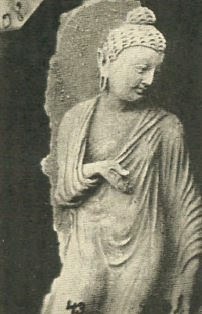 Even though what Heras says is difficult to believe in toto, considering the striking similarity between Gandhar school of art and Greek art, I feel that we can accept his argument to the extent, that contemporary Indian arts in Pre-Kushan and Kushan periods (200BCE-200CE), might not have been dominated by Greek school of arts. Sculpturing and such other Indian arts, must have flourished on their own, mainly in Kushan period, though maintaining a certain contact with Greek influences. 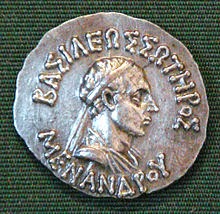 Another coin issued by King Menander

Coming back to our subject proper, we should therefore reject possibility of any great impact of Greek school of arts on Indian arts, particularly sculpturing, because of Alexander's campaigns or subsequent rule of Indo-Greek kings like Demetrios and Menander and can rule these out as possible reasons for existence of large number of Greek Mythology figures in Buddhist rock cut temples of ancient India.

We must therefore now turn to see, if any evidence exists in the cave temples themselves, which can lead us to the reasons of presence of these Greek Mythology figures there.