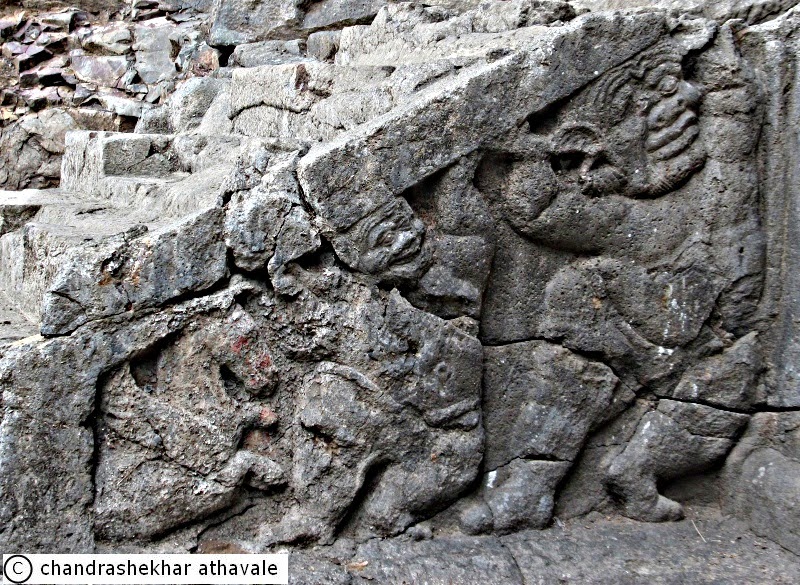 About a couple of years ago, I paid a visit to the ancient Buddhist rock cut temples at Pitalkhora; some distance away from the tourist town of Aurangabad in Maharashtra state of India. The main prayer hall in this group of caves is at a somewhat higher level than the foreground and one needs to climb a few steps cut in the rock to enter the prayer hall. The side faces of balusters of the steps are naturally of triangular shape. As I was looking around, I found some bass relief figures carved on these side faces. When I looked closely, I found first a large figure of the celestial dwarf ' Yaksha' with his hands up, as if he was supporting the steps along with another smaller 'Yaksha' to the left. Further to the left, in a narrow angle marked by two lines, there was a figure that appeared like that of a horse. I looked closely and a feeling of wonder and amazement filled my mind. The horse had wings. It was a classic figure of the Pegasus; the divine stallion with wings; straight from Greek mythology. I was not able to understand what a Greek Mythological figure was doing in a Buddhist temple excavated at least 200 years even before our era.

Next to the main prayer hall, at Pitalkhora, there was a large cave that housed cells of Buddhist monks and also a common hall. The cells for the monks were lined at the rear of the hall and also on the sides. The wall dividing the cave between common hall and cells for monks was highly decorated with carved Buddhist motifs like canopies and pillars. The pillars were shaped like a bell near the ceiling and above this, I found pairs of animals shown seated on the capitals. The first pair on the left itself was a big surprise again. Here, a pair of winged sphinxes was shown seated on the capital just below the ceiling. The sphinx on the right was shown seated in a proper lion pose but the one in the left was shown seated in a very curious way; just like a small baby. The Sphinxes had human heads, elephantine shaped ears and wore pendant earrings. The curly hairstyle on the heads of the both sphinxes, was vintage Greek without any doubt. 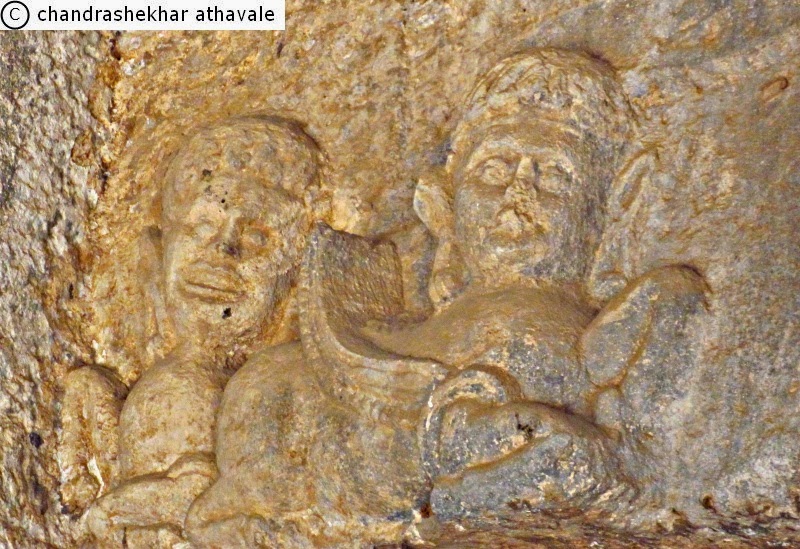 According to an eminent Indian archaeologist, M.K. Dhavlikar, even the Yaksha or celestial dwarf figures are of Greek origin. He says and I quote:

“ there should be little doubt that it is originally a Greek motif. In Greek mythology, atlants are sort of demons who support the earth and are quite commonly depicted in Greek art as supporting superstructures. At Nasik, the motif is much Indianized and hence the figures look like Yakshas.....but their earlier representation at Pitalkhora (2nd cent. B. C. ) is more illustrative. There they are carved on balusters of the flight of steps leading to the main Chaitya. They are dwarfs and have goblin-like features with curly hair and look more Greek.”
After this visit to Pitalkhora caves, I started specifically looking for figures from Greek mythology in other Buddhist rock cut temples excavated around that period during my visits. I found my curiosity amply rewarded at Nashik, Karle'n and again at Bhaje caves. Here are some of the Greek mythological figures that I found and appear in these caves. 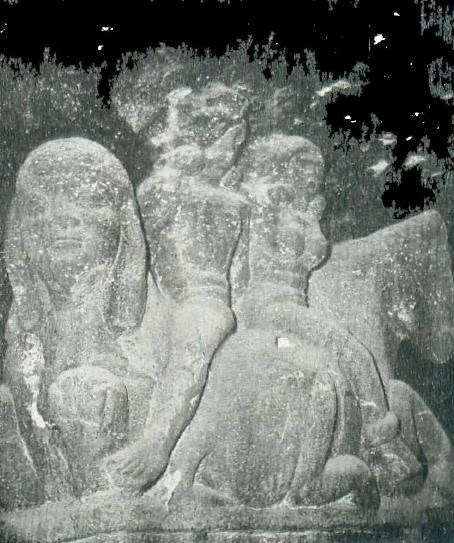 At Karle'n main prayer hall there is a figure of Sphinx with a human rider sculptured above a capital and an inscription below on the pillar, says it has been donated by a 'Yavana' named as 'Dhamadhaya.

In Nashik caves, very interesting figures of creatures from Greek Mythology can be seen. On the inner face of porch pillars, in cave number 3, there are two sphinxes again with bodies of lions. In cave number 24 on the eastern end, we can find a male rider riding a female centaur. A centaur is a mythological creature with the head, arms, and torso of a human and the body and legs of a horse. Such centaurs are of common occurrence in Greek art. Again in the same cave we find another surprise. Here a bass relief of a carved Owl can be seen. An owl is considered inauspicious in India. In Greek mythology, the bird was associated with Athena, the Goddess of wisdom and if one flew over or before Greek soldiers, it was a sign of victory. 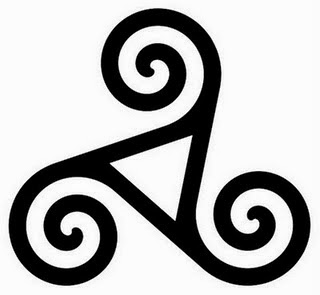 In addition to this, other Greek mythological figures like a 'Griffin'; ( with the body, tail, and back legs of a lion; the head and wings of an eagle; and an eagle's talons as its front feet) as well as figures of Nemean Lions can be seen carved on the capitals at the top of the inner face of porch pillars. Besides mythological figure, some common Greek motifs like that of a triskelion, a Swastka like motif with three arms radiating from centre, are also seen at Nashik. 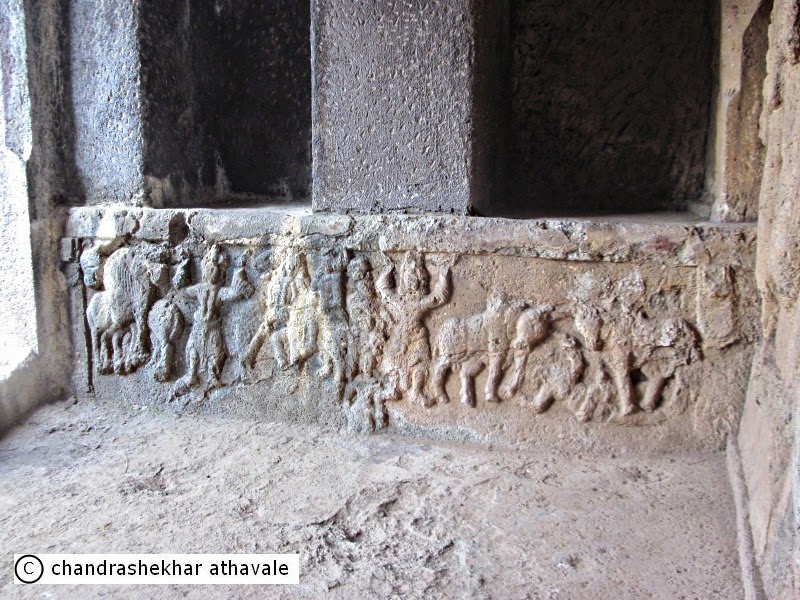 Pegasus and Atlants of Bhaje

One of the earliest Buddhist rock cut temples is at Bhaje. The cave number 18 here is a virtual feast for the eyes. Many Greek mythological figures appear here. Here again, we can find figures of centaurs, Pegasus and Yaksha or atlants carved on the capitals or on the walls.

The questions that naturally come to the mind therefore are why these figures and motifs were carved in what were primarily Buddhist caves, meant for Buddhist monks? Was it because of the influence of the campaign of Alexander the great on India that had happened a century and half earlier or was there some other reason?