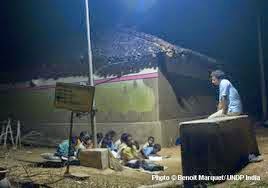 Few years ago, I visited by chance, a village lying somewhere in the midst of ranges of western ghat mountains that line up along the west coast of India. In this mountainous region, huge water reservoirs have been built over the years to provide water to the big cities. Yet, if one climbs up on one of the surrounding hills, he is likely to encounter many villages that have perennial water shortage and women folk have to walk long distances just to fetch water for household needs. The village I visited was one such village with no assured water supply, which meant that whatever little agriculture land was in the vicinity could be cultivated only during monsoon months. This also ensured that villagers were all poor, with very little farm income. Poverty of the people from the village could be seen everywhere. It was a very depressing kind of site. Yet, I saw on top of few shanty houses in the village, tell-tale satellite dishes projecting upwards in the sky, which obviously meant that they had TV sets in their houses.

Being curious, I checked up with a villager, who said many of the houses have TV sets. I asked him about the electrical power. Where do they get it? and can they afford it? I was surprised to hear that no one has electrical connection in the village. They just can not afford it. They use solar power to switch on TV sets for one or 2 hours every evening. Then I saw few poles fitted with latest low consumption lights fitted on them with a solar panel at the top. He said in the nights, the village is well lit. All these solar panels have been given to the village by some charity organizations and it does not cost anything for the villagers to get lights for their houses and streets. During that visit, I had realised, what solar power really means for countless number of remote villages spread all over India.

At other end of the economic spectrum, we have large corporate houses, who would not think twice before spending millions to make their industrial or commercial complexes lighted up so that they glitter and shine in night just to show their brand image. Though I have nothing against commercial organizations spending their own or shareholder's money on lighting up their campuses as if every day is a Deepavali day, it is definitely not something that promotes green energy initiatives.

Tata Group is an Indian multinational conglomerate company headquartered in Mumbai, Maharashtra, India. It encompasses seven business sectors: communications and information technology, engineering, materials, services, energy, consumer products and chemicals. Tata Group has over 100 operating companies with each of them operating independently. The combined market capitalisation of all the 32 listed Tata companies was INR 6.8 Trillion ($ 109 billion) as of March 2014. Tata Capital is a finance company from this group that fulfills the financial needs of retail and institutional customers in India. It was established in 2007 as a wholly owned subsidiary of Tata Sons and is registered with the Reserve Bank of India as a systemically important non-deposit taking non-banking financial company (NBFC). The company has offices in several Indian cities. It has its head office at a campus at Thane not far from the commercial capital of India, Mumbai. The company has given a very modern sounding name to its Thane campus and calls it as 'i-think Techno campus' for whatever reasons. 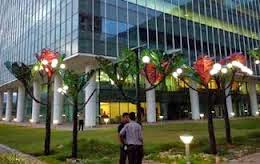 In January 2014, the company inaugurated a novel permanent demonstration set up to create an impact and increase awareness of the people with regard to the use of renewable energy. The demonstration set up is a cluster of six artificial trees made from metal pipe structures and fibre-reinforced plastic trunks and leaves. The system has been grouted into the flooring and is designed to withstand all weather conditions. Mounted on top of these artificial trees is a cluster of 14 solar panels that generate electrical power from sun light. The ‘trees’ self-illuminate and light up the garden from dusk to dawn, producing close to 750 watts of energy. The garden lights have been retrofitted with LED bulbs that consume less electricity as compared to conventional incandescent or CFL bulbs. Company says that the design iconography used in the ‘tree’ is executed in an aesthetically appealing manner. The whole setup is visually appealing and makes a strong statement about the environment and energy conservation. 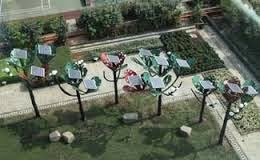 The company has aptly named this demonstration set up as “Surya Aranya' or Forest of the Sun. It is a first-of-its-kind project in India. The aim is to spread a strong message with regard to energy conservation. Company feels that the demonstration set up could be replicated on a much larger scale. And hope that civic bodies pick up the concept. Projects like Surya Aranya could also be used in housing societies. While the initial cost is high, in the long run, the energy savings will justify the cost. 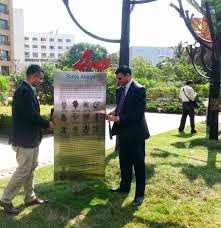 Coming to think of it, “ Surya Aranya” is an initiative well worth copying by corporates having large campuses, housing societies with internal roads that need lighting and Government establishments. Benefits are two fold. Firstly the campuses would looks aesthetically much more appealing and secondly it would cut down electricity bills.