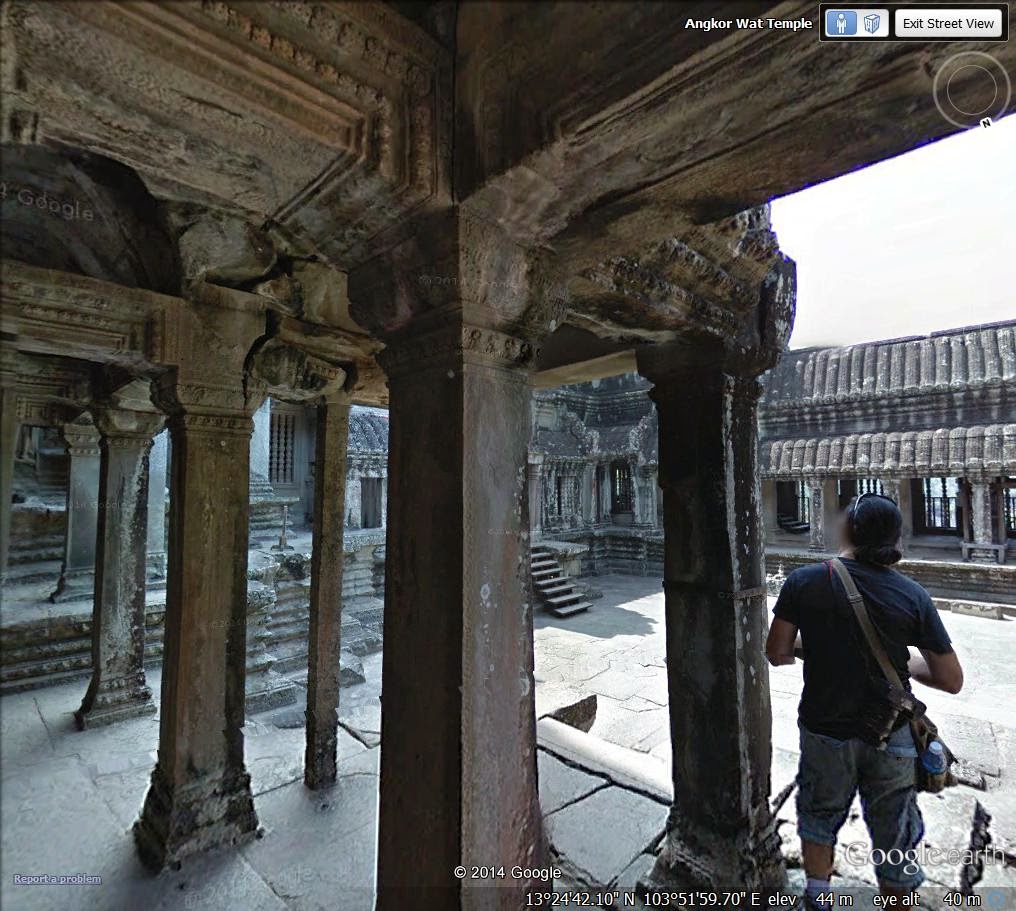 At the top of Angkor Wat temple

I paid a visit to Siem Reap in Cambodia in 2011. Like any other visitor, I was just dumbfounded at the enormity of it all. I wrote a series of travelogues, yet felt that I was just trying to describe entire vastness of a sea after looking at it from a point on a beach. The famous temples of Siem Reap, like Angkor Wat, Bayon temple in Angkor Thom or the tree strangled masterpiece of Ta Prohm are so vast and extensive that I found it almost beyond my capability to describe them. It is no wonder that Angkor is a symbol of national pride for Cambodia and also it's biggest tourist attraction, receiving about 2 million visitors a year.

Talking about photographs, I must have taken 100's of shots, trying to capture the magnificence of the entire temple as well as the detailed bass reliefs that have been carved in stone on temple walls. So munificent are all of them with finest details such as clothing, jewelery, that it is almost impossible to cover them all.

Restoration work in Siem Reap goes on all the time. It is not restricted to any particular nationality. Many nations from around the globe like France and Japan have spent huge amounts of money and efforts on restoration efforts. Recently restored temple of Baphuhon is an example of this. India has a special obligation towards Siem Reap. Khmer kings, who created these fabulous pieces of architecture, between the ninth and 13th centuries, were either Hindus or Buddhists and have imbibed in this capital theirs, very essence of Indian culture. India has been actively helping Cambodia in restoration work of Ta Prohm temple.

When I returned back from Cambodia and viewed the pictures- I had shot in Siem Reap- on my computer screen, I was terribly disappointed. The imagery on my screen did not show at all, the overall grandeur, I had in my mind. At the best, my efforts were just puny, unimpressive and were not able effective at all is showing either the gigantic proportions of the entire structures or the finest craftsmanship displayed in carvings of figures and design. One of the beauties of the Siem Reap structures are their fabulous sense of symmetry and proportions. My photos just failed to bring any of these out at all. I am quite sure, that almost all visitors to Siem Reap must have had similar feelings on their returns. 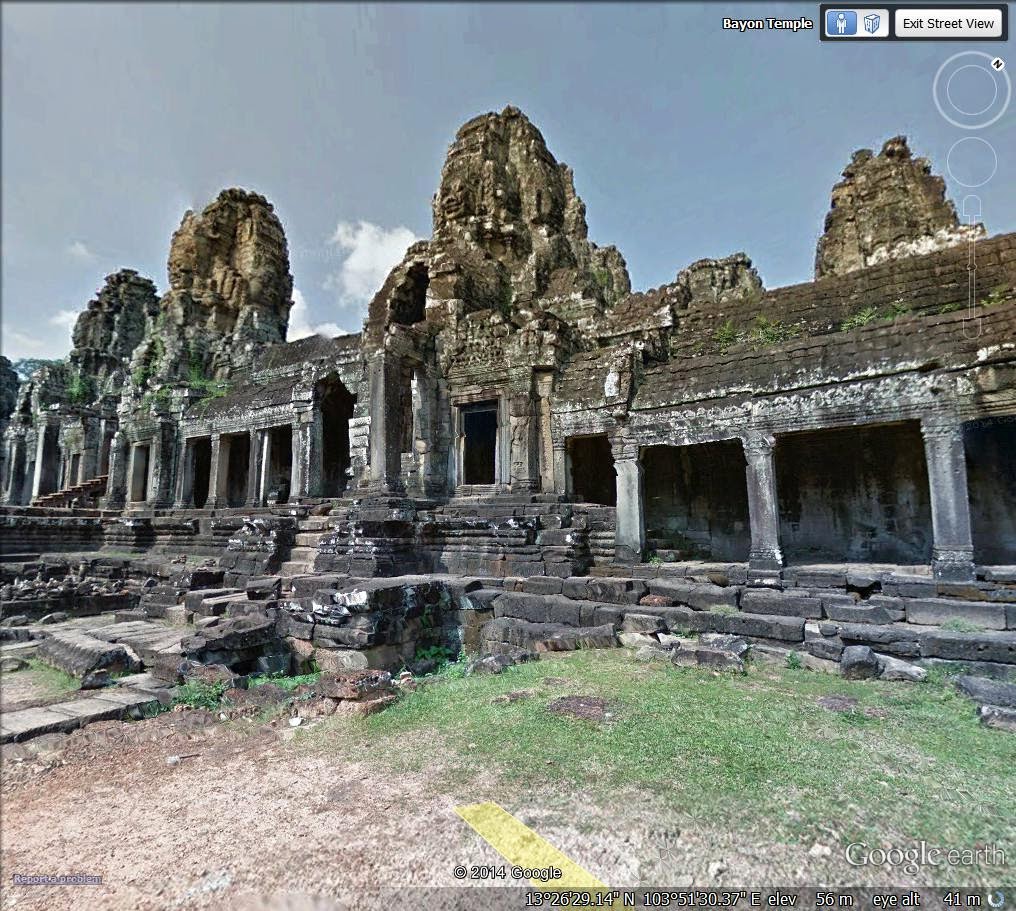 There is however some good news for Khmer Art lovers like me situated around the globe. The spectacular temples of Cambodia's historic Angkor civilisation have been now incorporated into Google's Street View. This means that just sitting at home in front of your computers, you can visit famous sun rise at Angkor Wat, for which I had gone there at 5 O Clock in the morning and you may not feel disappointed like me just because the sky was cloudy. 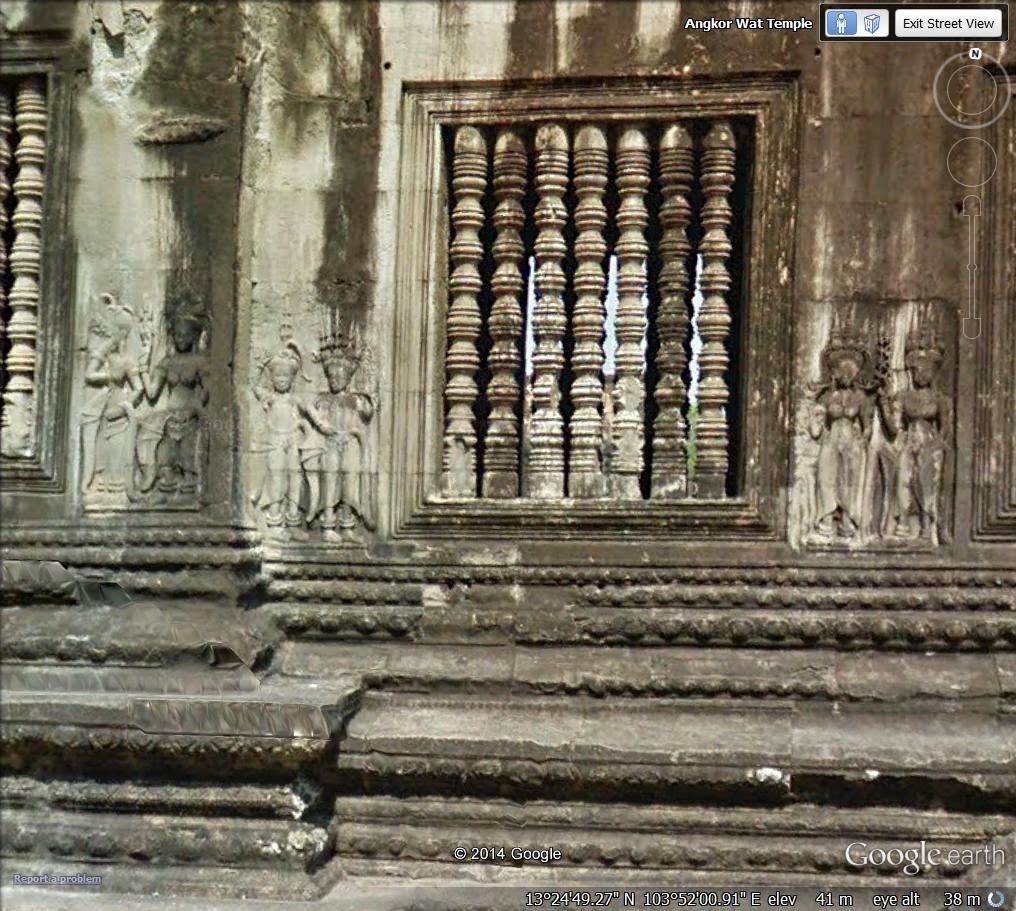 Google, it appears, have included as many as 90,000 new panoramic images to create these street views using all the tools such as Street View cars, Trekkers and tripods available to them to carefully photograph the exteriors and interiors of Angkor’s temples as they stand today. It is now possible to visit the temple from comforts of your house and see these great cultural and archaeological treasures in an entirely new way. I can certainly revisit the famous Bayon Temple or study the great mural depicting the full glory of the Ramayana’s Battle of Lanka showed in bass relief carvings on outer walls of Angkor Wat.

Google says in their blog; and I quote;

We hope this new imagery will not only let people experience the scale and beauty of Angkor wherever they are, but also demonstrate how technology can change the way cultural treasures are preserved for generations to come.”

Google adds that they have plans lined up to make more than 100 of these historic sites available online with Street View on Google Maps. This is real good news and something just unbelievable.