When the time itself began! 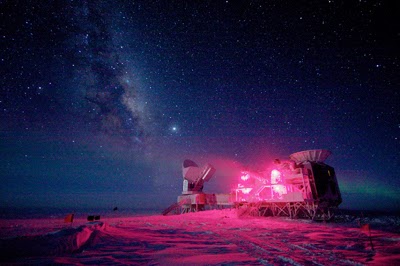 The standard model of Physics stipulates that at the sub atomic level, there are as many as 12 particles. Out of these particles, some are known as Bosons (Named after famous Indian scientist Bose.) Other particles like Quarks exert forces on each other by exchanging these Bosons. The forces, which these particles exert on each other are of four types. The first force is the Electromagnetic force of attraction between oppositely charged particles like protons and electrons. The effects of this force are easily visible because it can act over larger distances. Working of many commonly used gadgets like electromagnets, electric motors is based on applications of this force. The next two of the basic four forces can act over a very small distance. Because of this reason, there effect is felt only inside an atom or at the most within a molecule. Out of these two, the force known as the 'strong nuclear force' is at least 25 times stronger than the Electromagnetic force.  Because of this inherent strength, this force can easily overcome the electromagnetic force within the nucleus of an atom and keeps the nucleus together. The third force is known as Weak Nuclear force and its action on hydrogen atoms in the interior of Sun is primarily responsible for creation of solar energy that sustains life on earth.

The fourth force is well known to us and we observe it every day as the Gravitational force. Isaac Newton. the great British scientist had given us the empirical formula for this force in as early as 1687.  Many everyday natural phenomena that we observe, like tides of the seas, creation of day and night due to rotation of earth and creation of four seasons because of earth's rotation around the Sun, are all due to this force. Falling down of a ball thrown up or even the leaves of a tree falling down, are all examples of this force. Yet this force is so feeble that Electromagnetic force is 10^42 times stronger than this force. Question arises as to how such a weak force controls our lives. The reason is simple. This force becomes appreciable only when a large body like earth or sun exert it on another body.

Though gravitational force was discovered long time ago, its exact nature has always remained unknown. According to Einstein’s theory of relativity, speed of light is the ultimate speed that can be achieved by any particle with or without mass. Since all the forces that I have described above, are essentially created by exchange of Bosons; this exchange can be done only at or below the speed of light, which is a finite number. This means that the exchange of Bosons would require a finite interval of time. In case of a Gravitational force, the distances between two masses that exert this force on each other are enormously long (eg. between earth and Sun.) Exerting gravitational force therefore should theoretically take a long interval of time. In practice, we observe something that is contrary to this. Gravitational force is felt instantly.

To overcome this difficulty in explaining Gravitational force, Einstein proposed general theory of relativity that can explain gravity as the deformation of space by massive bodies like earth or sun. Einstein imagined the space time like a flimsy blanket, where embedded stars and planets cause it to curve rather than remain flat. When two massive objects move towards or away from each other, these curvatures caused in space time by these massive objects, do not remain stationary, but move like ripples on a water surface. Einstein called this changes in curvature as gravitational waves that propagate like on water in a lake or seismic waves in Earth’s crust. 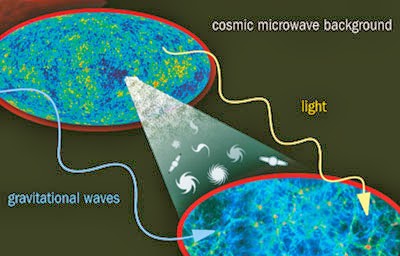 It is now generally believed that our universe was caused by a big bang some 13.8 billion years ago. In a time span, less than the blink of an eye, the infant cosmos expanded exponentially, inflating in size by 100 trillion trillion times. In the year 1964, astronomers at Bell Labs in New Jersey were able to detect for the first time an all pervading but extremely weak, microwave radiation, known as cosmic microwave background, proving that the universe began in an immensely hot explosion radiating electromagnetic waves in visible or near visible wave bands. As the universe expanded and everything started moving away from each other speeding up faster and faster, there was a redshifting in the wavelength of this background radiation. In physics, redshift happens when light or other electromagnetic radiation from an object is increased in wavelength. Redshift means an increase in wavelength or a lower frequency. The visible light radiation from the big bang has now redshifted to microwave band after these 13.8 billion years.

Imagine a balloon being blown up. Even though every small part of the balloon expands at the same rate, small imperfections on the surface would cause that part of the balloon growing up at a slightly different rate or in other words create small local ripples on the surface. Similarly, though this theory of rapid cosmic inflation would make the entire cosmos remarkably uniform across vast expanses of space, many scientists argued that we should be able to observe tiny fluctuations in gravity that began as gravity ripples and when cosmos inflated, became gravitational waves. In other words, all these theories can be proved right if and if only, we are able to positively detect gravity waves in the background microwave radiation. Although the theory of cosmic inflation was believed by many, the failure to find the gravitational waves so far as predicted, caused many cosmologists to hold off their endorsement of this theory 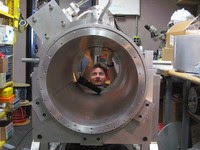 Gravitational waves are feeble primordial undulations that propagate across the cosmos at the speed of light; no one was able to detect these waves so far. Since there is too much of human made electromagnetic wave interference around the earth, a spot near the south pole was chosen to set up an experiment known as BICEPII at Amundsen-Scott South Pole Station in a laboratory named as Dark Sector Lab. BICEPII is essentially a small aperture telescope with large number of detectors to increase mapping speed. 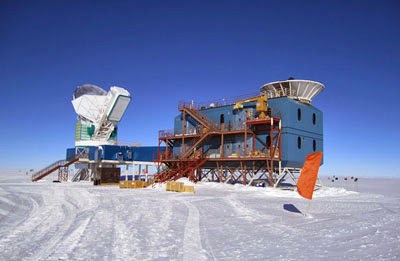 Last week, a research team led by co-leader Clem Pryke of the University of Minnesota first announced successful detection of the illusive gravity waves. Surprisingly, The measurements announced by the astronomers last week are nearly twice as large as cosmologists predicted for gravitational waves. Since the strength of the gravitational waves’ signal is tied to how powerfully the universe expanded during the brief era of inflation we might have to change our ideas about how powerful the process was.

Detection of Gravity waves within a year of the experimental proof for existence of Higgs Boson really proves that we are living in momentous and extra ordinary times. Higgs Boson discovery explained how mass was created in the first place in the primordial universe and now we have a signal that comes from when the time itself began.