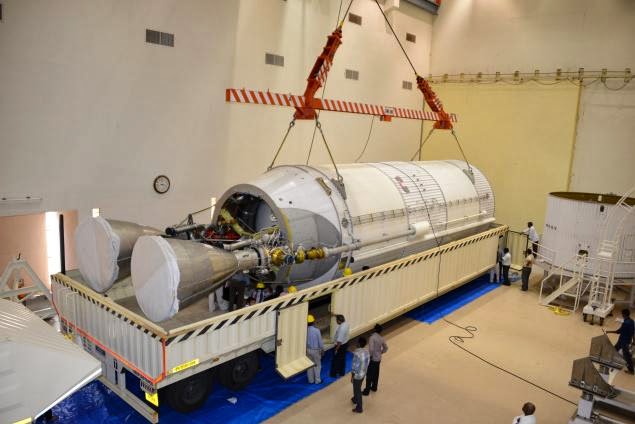 A key engine component of India's monster rocket GSLV Mk.III was recently sent to the launching pad for final integration with other components. This component called as ' L110 re-startable liquid stage' is actually the second stage rocket motor that uses 110 tonnes of liquid propellants. GSLV Mk. III is by far, India's most powerful launch rocket that is being readied for its maiden experimental launch. About this giant rocket, ISRO web site claims:

“ GSLV Mk III is conceived and designed to make ISRO fully self reliant in launching heavier communication satellites of INSAT-4 class, which weigh 4500 to 5000 kg. It would also enhance the capability of the country to be a competitive player in the multimillion dollar commercial launch market. The vehicle envisages multi-mission launch capability for GTO, LEO, Polar and intermediate circular orbits.
GSLV-Mk III is designed to be a three stage vehicle, with 42.4 m tall with a lift off weight of 630 tonnes. First stage comprises two identical S200 Large Solid Booster (LSB) with 200 tonne solid propellant, that are strapped on to the second stage, the L110 re-startable liquid stage. The third stage is the C25 LOX/LH2 cryo stage. The large payload fairing measures 5 m in diameter and can accommodate a payload volume of 100 cu m. ”

GSLV Mk. III would also make it possible for India to send human astronauts to space under its Human Space Flight (HSF) programme. With that aim in mind, the present experimental flight to take place in June or July 2014, is planned in such a way that it shall carry a crew capsule weighing 3.5 tonnes, without astronauts. The capsule will return to earth with the help of parachutes. Obviously, the crew capsule will carry no astronauts, as it was only a replica of the crew module that would be put into orbit in a real mission in future. We can therefore call the first experimental flight of GSLV Mk. III as a forerunner to India sending its astronauts to space.

GSLV-Mk III is the “muscular sibling” of GSLV-Mk II, that employes an indigenous cryogenic engine. This was recently launched successfully. GSLV-Mk III is capable of putting communication satellite weighing four tonnes into geo-synchronous transfer orbit or a 10-tonne satellite into low-earth orbit.

The second stage rocket motor for GSLV Mk.III known as L110 re-startable liquid stage, was fabricated at the Liquid Propulsion Systems Centre, Mahendragiri, near Nagercoil, Tamil Nadu state (now being called as Indian Space Research Organisation (Isro) Propulsion Complex after a recent administrative change) and was sent to launching site from here by road. The Mahendragiri centre has been instrumental in assembling and testing as many as 125 engines made by Isro so far. The indigenously developed cryogenic engine that had functioned well in recent launch was assembled, integrated and tested at this facility.

The first stage solid fuel boosters, each weighing more than 200 tonnes, are being readied near the launching site of Sriharikota on India's east coast, itself. The second stage would be married off with first stage boosters at the launch site itself. Since this is an an experimental mission, the rocket will only do a sub-orbital flight and reach an altitude of only less than 100 km. Its upper cryogenic stage will not fire as being a passive flight, instead of cryogenic propellants, the cryogenic stage would carry liquid nitrogen, which would be inert.

Realisation of GSLV Mk-III is very crucial and important for ISRO because success here would establish ISRO as a major player in this field capable of putting put heavier satellites into orbit.