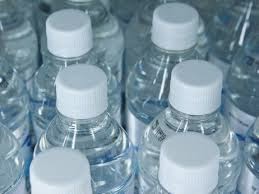 A Plastic pouch or a bottle for storing liquids like drinking water or milk can simultaneously be considered as a boon as well as a bane. Few decades ago, when easy availability of bottled or pouched drinking water was not even remotely imaginable, getting pure water to drink that was impurity or germ free used to be a great source of worry, while travelling. In particular, when small children travelled, reasonable quantity of water needed to be carried along. These days in India, potable drinking water is now commonly sold in “PET” bottles, which is definitely a boon for everyone: for school going children, office goers as well as travellers. 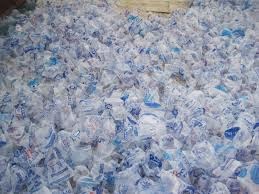 In the African countries like Ghana, such drinking water is sold in plastic pouches. One can commonly see vendors sitting on roadsides with wicker baskets full of plastic pouches containing water. The thirsty travellers , purchase these pouches and quench their thirst. According to one estimate, in Ghana's capital Accara, 3 Million inhabitants manage to generate so much garbage from these plastic pouches that at least 80% of the total plastic garbage consists of these plastic pouches.

What happens to these bottles or pouches after the water is drank. In India, the bottle are just discarded, though it is possible recycle them. The result is that almost in all places and more so in tourism related places, we see discarded water bottles everywhere, in garbage dumps, sea beaches and street corners. In Ghana, the plastic pouches are invariably throw away on the road sides, creating an environmental disaster. With these discarded bottles or pouches lying around, it is difficult not to agree that use of plastic containers is actually a bane.

The problem of discarded plastic water containers, has become so serious that many countries are trying bring in legislation to ban their use. However the benefits offered by these plastic containers such as convenience and low packaging costs so much over weigh the environmental concerns, that their use is actually growing rapidly.

I came across two ideas on the net, that have the potential of offering a real alternative, that is cheap and is free of any environment concerns. The first of these has been developed mainly for use as a potable water containers by three London-based industrial design students, Rodrigo García González, s Pierre Paslier and Guillaume Couche. They have named their revolutionary water container as “Ooho.” It is commercially being offered by Fast Company. 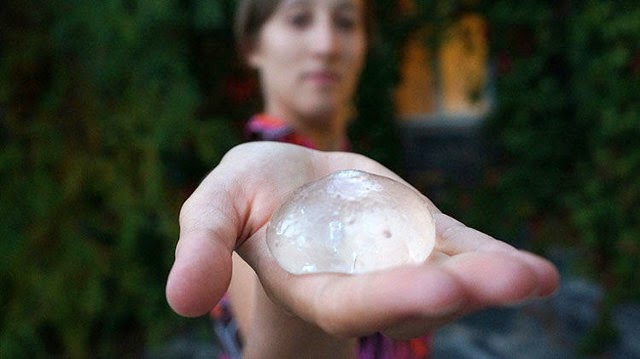 It is actually a blob like water container made from brown algae and calcium chloride. The inventors say that The container holds water in a double membrane using "spherification," the technique of shaping liquids into spheres that was first developed in labs way back in 1946 and is presently used by some chefs in Spain. It works a little like an egg yolk, which can hold its shape using a thin membrane to contain the egg.

The process developed by these three students creates a gel from the basic constituents of the “Ooho.” The double membrane protects the inside hygienically, and makes it possible to put labels between the two layers without any adhesive. While the package is being formed, the water is frozen as ice, making it possible to create a bigger sphere and keeping the ingredients in the membrane and out of the water. The real beauty of “Ooho” comes from that facts that it is is easy and cheap to make (costs just Rs.1.20 (2 cents), strong, hygienic, biodegradable, and most important of all, it is edible. You can just eat it.

There are naturally some problems and challenges, if we want to start eating “Ooho's” to quench our thirst. How the package stays clean before you drink from it and potentially eat it. How to transport it or carry it? Other problem is that when we try to eat water, it is bound mess up things a little. Inventors say that they hope people will try making the packages at home. "Anyone can make them in their kitchen, modifying and innovating the recipe," says García. "It's not DIY but CIY--cook it yourself."

Another product that has the potential of replacing bottles and pouches has been developed by a company called as WikiFoods, Inc. It has developed a revolutionary, plastic-free food and beverage packaging technology that, they say is inspired by the way nature packages fruits and vegetables. It has developed a skin similar to skin of grapes, which tastes delicious and also offers protective coatings against water loss and contaminant entry, and potential carriers of effective and functional nutrition. Company calls these skins as “wikipearls.” 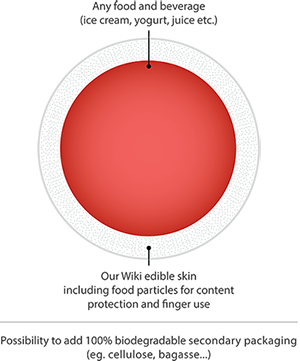 The WikiFood manufacturing technology protects the wrapped food or beverage without exposing it to unnatural materials or chemicals while also delivering benefits of health, convenience and a food experience like nothing else. At present company offers their own brand of foods like ice cream, cheese, frozen yogurt, fruits, vegetables, water, cocktails and soups, wrapped it these eatable skins. They are not offering their packaging technology to others as yet. But day may not be far off, when other manufacturers would start offering their product in similar eatable skins. 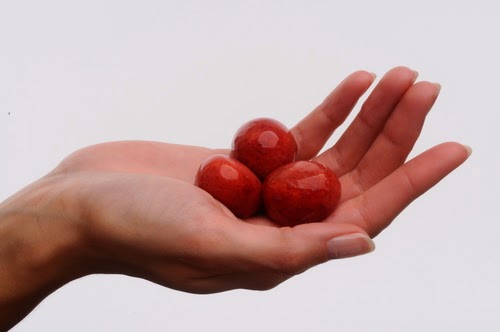 WikiFoods says: “The skin is a protective electrostatic gel formed by harnessing interactions between natural food particles, nutritive ions and a polysaccharide. Through this proprietary and patent-pending technology, the skin becomes more impermeable to water and oxygen than other edible skins available.” I do not as yet know whether these Wikipearls can be conveniently washed before they are eaten, just like bunch of grapes. If this is not possible, there might be some difficulty in storing them.

Both these products appear quite revolutionary to me and as there use becomes common and popular, I hope that much more development would take place offering us more convenient and cheaper water or milk containers , which we can simply eat.