Celebrating 'Holi' up above in the sky If we ask any seasoned air traveller, what would he consider as the most boring moments of his/her entire air journey? I am sure that the answer would be the minutes, when mandatory air crew safety demonstration is done at the beginning of each and every flight. This demonstration, carried out at the instance of International Civil Aviation Organization, usually is accompanied with an announcement, which begins something like this: “Now we request your full attention as the flight attendants demonstrate the safety features of this aircraft.” The demonstration typically cover such aspects as bracing position, seat belts, emergency exits, oxygen masks, life belts etc. There is no doubt that all this information is of vital importance during an emergency, but a seasoned traveller normally has heard it so many times that he tends to simply neglect it, particularly on long haul flights with stops on way.

Cebu Pacific airlines is a budget airline serving around the Asia-Pacific region. In October 2010, they came out with a novel idea to promote their airline, prior to a planned stock exchange offering on 12 October, 2010. To catch the media limelight, they decided a novel approach for grabbing the passengers' attention for the oft-ignored safety demonstration, when pretty, young female air crew performed the air safety demonstrations, as part of a dance routine involving a Lady Gaga tune and then allowed the passengers to take videos of the dance. The air crew mixed in dance moves with instructions about how to don life jackets, use air masks and find the emergency exits. Obviously, Cebu Pacific's novel trick was not so much really to grab passenger's attention towards safety demonstration but instead had in mind it's $538 million capital raising exercise on Philippines' stock exchange, as part of plans to buy more planes to compete with Singapore's Tiger Airways and Malaysia's Air Asia.

The idea clicked, as the videos of the crew dancing became You Tube sensations with about 7 million hits. However, there was criticism from the feminists. The women's political party Gabriela in Philippines said that the routine was "a cheap promotional gimmick" and branded the airline "a purveyor of sexism and machismo". Responding to the criticism, airline came out with a second version that featured male crews also dancing to a 1980 tune “Men Without Hats.” This dance was quite appreciated by many female passengers at least. 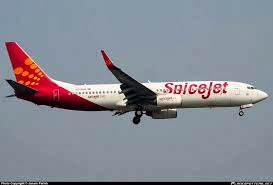 India's budget airline 'SpiceJet' appears to have taken a leaf out of Cebu Pacific's book last week. On March 17th 2014, when Indians celebrated the festival of colours known as 'Holi,' SpiceJet ran eight special flights with extra cabin crew on board, to do a 2.5-minute jig to celebrate Holi. The cabin crew on these flights performed a small dance sequence based on a song 'Balam Pichkari' from Bollywood chartbuster 'Yeh Jawaani Hai Deewani,' starring Ranbir Kapoor-Deepika Padukone, at 35,000 feet up in the air. The airline allowed the passengers to take videos with their mobile phones. The videos were eventually uploaded on YouTube and other social media. In one video, a pilot is seen coming out of the cockpit and taking photographs of the celebrations at the front of the aisle. Passengers apparently did not mind the dance as they are seen in the video, cheering and clapping along.

While Spicejet management and the passengers appeared pleased with the promotion and the media attention, the airline received.  India's directorate general of civil aviation (DGCA) was not amused at all. Smarting under recent downgrade of India's flight safety ranking by US, DGCA is in no mood to take things lightly and has promptly issued a show cause notice to Spicejet with a threat to ground the airline. DGCA says in it's notice using a video shot on the SG 876 Goa-Bangalore flight as evidence:

Cabin crew acts had drawn the attention of other crew on duty, thus reducing their preparedness/alertness. The frequent movement of the dancing crew may have affected the aircraft's centre of gravity during flight and created turbulence. The airline is charged with permitting use of cellphones in the air to take pictures, which is against present regulation. It is accused of creating an environment that might have instigated passengers to become unruly.... It is established that SpiceJet failed to observe various safety regulations to provide a safe flight. 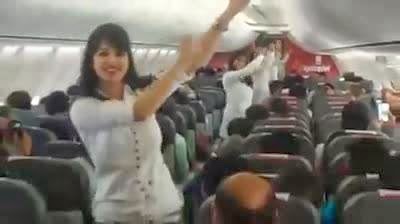 Spicejet has tried to defend themselves by saying that the cockpit was manned at all times as per DGCA regulations that govern situations, when one pilot is outside, for instance to use the toilet. The dance that lasted just 2.5 minutes, was professionally choreographed and was a Holi delight for passengers. It had also put additional crew members — two airhostesses and an in-flight manager — on the flights for this jig.

Many Indian and foreign airlines have held magic shows, birthday celebrations and other festivities on board. Several airlines around the world celebrate special occasions such as Xmas on their flights. To show that Spicejet's idea was not new or untried before, I have highlighted above, similar attempts, by Cebu Pacific. None of such previous attempts have resulted with any untoward results. In case of Spicejet it was simply trying to give its flyers a memorable Holi experience, and the passengers weren't complaining. But it appears that Spicejet may have to pay the price for its exuberance.