Prior to 1998, single-most iconic symbol of rural and untouched Afghanistan, was a pair of giant Buddha statues that stood in their hillside niches near a beautiful rustic place, Bamiyan. An ancient traveller mentions that if heaven is to be ever found on Earth, it would be in Bamiyan only. The distant snow covered peaks from north and south, surrounding grayish-brownish mountain ranges with razor cut vertical cliffs from all sides and right in the middle a refreshing green river basin, which itself is at an height of 8000 feet, is how Bamiyan can be described. The river, the greenish-yellowish fields on both the banks, dotted with earthen forts make the landscape stunningly beautiful and picturesque and make it look as if a model has been laid out. It is said that whenever anyone entered the Bamiyan valley, his mind automatically felt detached from the problems of his world. This probably was the reason why Buddhist monks were attracted to Bamiyan in the first place.

No one precisely knows, when the Bamiyan Buddhas were carved out of the hillside. The archeologists now believe with the application of new carbon dating method that smaller image of the two was carved out in 507 CE and larger image was carved in 554 CE. In the year 632 CE, a learned Chinese monk made a journey by land from China to India in search of the original Buddhist scriptures and teachings. His name was Xuan Zang and he had believed that true Buddhist religion was being practiced only in India. He stayed at the Nalanda university, in present day Bihar state of India and had completed his learning of the true religion as per his belief. Every one knows this part of the history, yet very few understand that Xuan Zang's travelogues are perhaps our only guide books about the political, social and religious conditions of this region in those times. Xuan Zang had traveled to India by a route passing through present day Afghanistan. Being a Buddhist monk, he had considered that traveling through a particular region of present day Afghanistan was of paramount importance to him. This region was located to the south of the state of Bactria and part of the Hindukush mountain ranges and was known as Bamiyan. To visit Bamiyan and pay his respects to the Huge Buddha statues there, was of utmost importance to him. Xuen Zang has left detailed description about Bamiyan and the huge Buddha statues there in his travelogues. 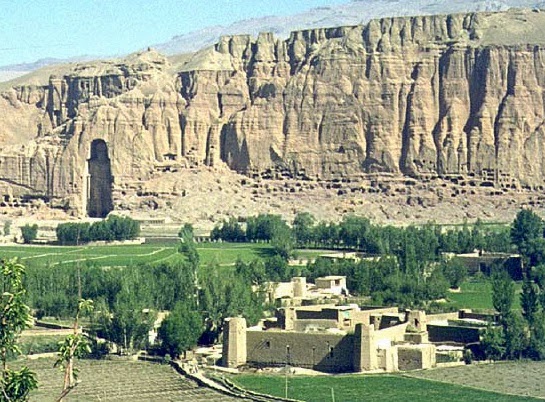 As per Xuan Zang's description, there were three images of Buddha. Two standing images and a third image of sleeping Buddha at the base. This sleeping Buddha was 1000 feet long. This third image however finds no mention in subsequent history anywhere. The smaller standing image on left was 114 feet high and the taller image on right was 165 feet high. These images were not completely carved out of stone. Their shapes were roughly carved out and subsequently a cement formed by grinding earth, hay and horse's hair together with some binder was applied all over the rough images to give final shape to the image. A coat of paint was given over the cement coating layer. Afghanistan's extremely dry weather had ensured that this cement coating and the paint layer would have a long life that can survive for centuries. The larger Buddha image was painted in blood red colour, whereas the smaller image was painted in multicolours. Xuan Zang says that the smaller image was painted golden. The apparel worn by Buddha in these images had a distinct Greek touch. Experts have said that it was obviously seen that both images were influenced by the Gandhar, Greek and Persian sculpture. On both sides of the rock cut cave or shelter, in which the Buddha images were sculptured, there were many small cave like structures cut in the wall. Wall painting similar to Ajintha caves were painted on the walls of these caves. With this decoration, the Buddha images and the entire scene looked very majestic and grand. 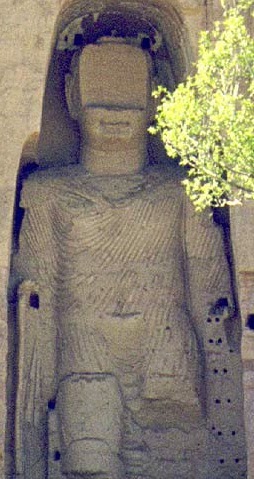 The calm and quiet of the affluent Bamiyan was destroyed for the first time in 1272 when great conqueror Genghis Khan sent a small army led by his grandson to capture Bamiyan. In the ensuing battle, the grandson was hit by an arrow and died. After learning about this, Genghis Khan was so angry that he sent his army to Bamiyan with orders that no human or animal should survive the onslaught. The signs and remnants of the total ruin and destruction brought about, are still visble in form of some of the ruined forts. Luckily, Genghis Khan's soldiers were scared of touching the Buddha images and these were saved.

In the fifteenth century, then Amir of Afghanistan, Babur loved the beauty of Bamiyan and made efforts to bring back old glory to Bamiyan. However, since the silk route trade had diminished then, Bamiyan remained in the backgrounds. When Mughal king Aurangjeb came to power in Delhi, he tried to disfigure Bamiyan Buddhas. Luckily again his soldiers were not able to achieve much, except for slight disfigurement of the Buddha faces. 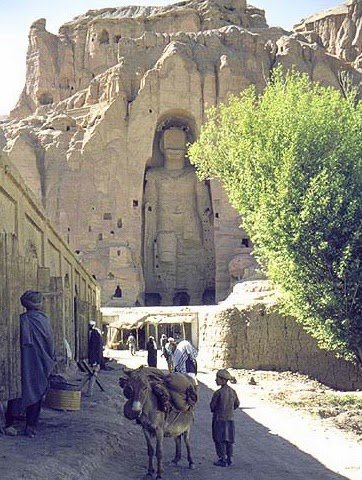 After these historic attempts to destroy the giant statues failed, Bamiyan Buddhas were left in relative peace till 1998, when another band of Muslim fanatics known as Taliban, captured power in Afghanistan and decided to demolish the Buddha statues. Taliban cadres were keen to destroy Bamiyan ever since 1998. Initially Taliban destroyed many small Buddha images carved in small caves on both sides of major Buddha images. The history lovers from all over world requested Afghanistan Taliban not to destroy Bamiyan Buddhas and make the world loose one of its historic monuments. This was of no avail. Finally in February 2001, Chief of Taliban in Afghanistan, Mulla Umar gave orders to destroy Bamyan Buddhas. In March 2001, Taliban planted powerful mines near the Buddha images and both the images were destroyed and big heaps of crushed stone and loose earth was all that remained of Bamiyan Buddhas.

In 2003, United nations declared Bamiyan as a world heritage site and efforts were started to save whatever remained at Bamiyan. This also means that any modifications to the face of the cliff would, in practice, have to be approved by UNESCO's Expert Working Group. A controversy has now arisen, whether to re build the giant statues or just maintain the caves or niches, in which giant statues once stood.

In 1970, before Taliban had destroyed the statues, Indian conservators had re-built the giant feet of the statues, to replace the missing originals. Last year, German conservators doing stabilisation work on the eastern niche, quietly began building pillars to support the stonework and protect visitors from potential collapse. However, what they had built looked looked much like the feet built earlier by Indians. When UNESCO discovered, what was happening, it immediately asked the Afghan government to order the work suspended.

Germans are however not convinced. German branch of the International Council on Monuments and Sites, was awarded the contract by UNESCO to do much of the conservation work on site. Michael Petzet, an archaeologist, is the president of this German organization. He says making no secret of his intent: "These feet, it was only the idea for the safety of the whole structure,and maybe in the future if the Afghan government wants to make a little bit more, they can build upon this."

Brendan Cassar, Chief of Cultural Heritage, is the UNESCO's culture specialist in Afghanistan. He disagrees with what Michael Petzet says. In support of his argument, Casser says:

"Our priority has been to stabilise iconic elements of the World Heritage site that are unstable. The point is, a very small percentage of the surface remains, some pieces are the size of a car and some a grain of sand." In addition, the type of sandstone from which the Buddhas were carved is highly unstable. He feels that one can not go to step 10 unless steps 1 to 9 are addressed, to make a good restoration. There is also a problem of availability of funds. Pledges from donors to fund even the basic work have fallen short by at least $700,000.

Afghanistan Government wants that at least the smaller statue of the two should be re-built. According to Abdul Ahad Abassi, head of monuments for the Afghan culture ministry, the Government has formally requested that the smaller Buddha be rebuilt, and UNESCO's World Heritage Committee is studying the issue. Abdullah Mahmoodi, of the Bamiyan Tourism Association says: “I say rebuild one of them to attract tourists, particularly from Buddhist countries like Japan and South Korea. One ( empty niche) should remain like that to remind people what the Taliban did. The best way to protect our monuments is to make them valuable again."

With opinions so passionately split, Bamiyan Buddhas are unlikely to re-emerge from the heaps of rubble.