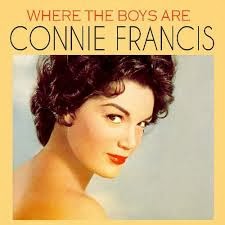 This week, we have another super hit from Connie Francis, (born Concetta Rosa Maria Franconero, December 12, 1938), who was a top singer of Italian heritage of 1950's. She often was called as MGM Nightingale mainly because of her contract with MGM records. This one is considered as her signature song, The song was written at her request for the title song to the 1960 movie by the same name "Where The Boys Are."The song reached #4 on the Billboard Hot 100 in early 1961.


If you can not see the embedded video on your android devices, here is the link. http://youtu.be/wUBT69YWqBA You can also copy and paste the link in your You Tube App. If that also does not work, search You tube, Where the boys are Connie Francis

Email ThisBlogThis!Share to TwitterShare to FacebookShare to Pinterest
Labels: Connie Francis, Long forgotten musical tracks, Where the boys are