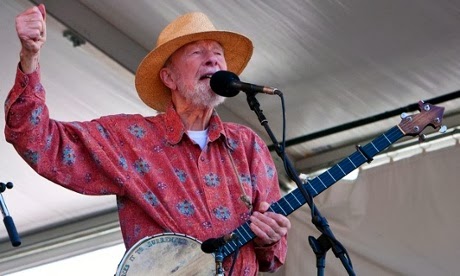 "Pete" Seeger, an American folk singer and activist died last week on 27th January 2014. He was 94. Pete was a regular fixture on nationwide radio in the 1940s, he also had a string of hit records during the early 1950s as a member of the group Weavers. His career took him from labour rallies to the Top 10 in college auditoriums and to folk festivals.

He was convicted for contempt of US congress in 1955. Later Pete met Dr Martin Luther King, at the Highlander Folk School in Tennessee in 1957. Seeger helped King and other civil rights activists incorporate a song into their organizing tactics. It was here at Highlander that Seeger first sang for King what would become the anthem of the civil-rights movement “We Shall Overcome.”

This week, we have the same song featured here as a tribute to Seeger. Readers from India might be well be surprised that a very popular song in India, “Ham honge Kamyab ek din” is based on this song by Pete Seeger.


If you can not see the embedded video on your android devices, here is the link. http://youtu.be/QhnPVP23rzo You can also copy and paste the link in your You Tube App. If that also does not work, search You tube,Pete Seeger We shall overcome