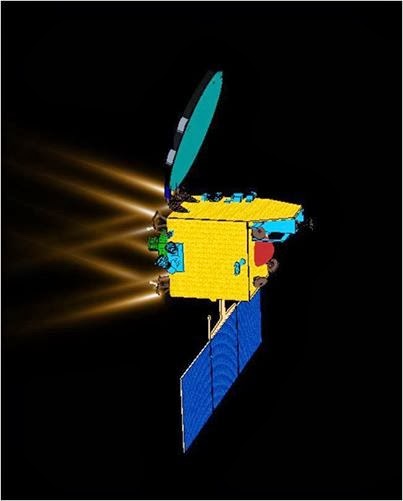 Last week India's space research organization gave its followers a chance to rejoice as it twitted the long awaited news about India's maiden deep space mission: Mars Orbiter mission or (MOM): the tweet said:
“MOM is about 15 million km away from Earth. It takes 2 mins for a signal to go to MOM and return, about the time mom takes to make noodles !”
A nice way to describe the time delay in communicating, no doubt.

On this Wednesday or 12th February 2014, MOM has already travelled 190 million km from earth in a semicircular path. It is however only 16 million km away from Earth because the Earth is also moving in the same direction. This 16 million Km distance is actually line of sight distance or in other words, we would need to draw a 16 million Km long imaginary line in space between the MOM and The Earth.

MOM also has reached another milestone on this day, having completed 100 days in space, which works out to be one third of the total time duration MOM is going to take to reach the red planet. ISRO also announced that the country's first interplanetary probe, launched on November 5, 2013, is in good health during its curved travel of 190 million km so far towards Mars; it has to traverse a total of 680 million km over the next 210 days.

Readers might recollect that India's space scientists had used a slingshot method to give a critical escape velocity of 11.2 Km per second to MOM because PSLV, the rocket that was used to launch MOM, could not impart that kind of velocity to MOM weighing 1300 Km. As a result, MOM had to spend about 20 days going round the earth before it was ejected in space to get out of the clutches of the mother earth in a path that was tangential to its orbit around the earth. MOM actually escaped from the sphere of influence (SOI) of the Earth at 1.15AM of December 4, 2013. The SOI of the Earth extends to about 9.25 hundred thousand km from the Earth. It is now moving into a perfectly sun-centric elliptic orbit like that of a comet towards Mars; it has to traverse a total of 680 million km over the next 210 days before it reaches SOI of Mars. 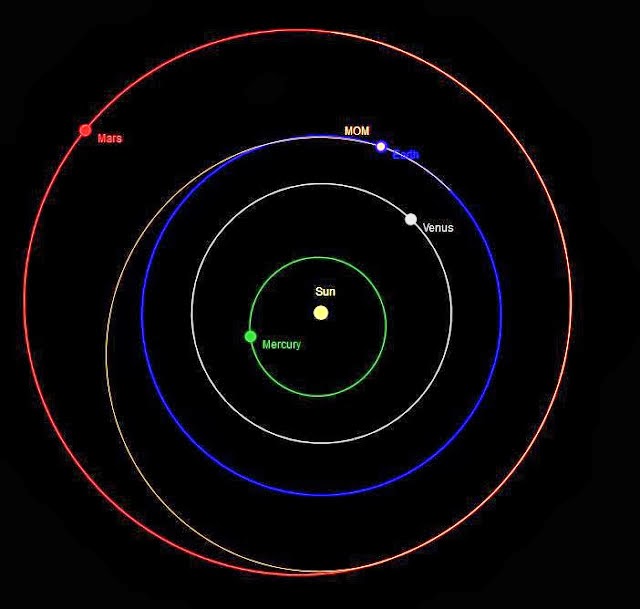 The spacecraft is being monitored and controlled by the ground station of ISRO Telemetry, Tracking and Command Network (ISTRAC) monitors continuously. This ground station is located at Byalalu village on the outskirts of Bengaluru city. In a statement released on 6th February 2014, ISRO says that all the five instruments on the Mars orbiter were switched on for tests and were found to be performing well. ISRO also confirms: "Except for a 40-minute break in the telemetry data received from the spacecraft to the ground station, data has been continuously available for all the 100 days. At present, the spacecraft is at a radio distance of 16 million km [from Earth] causing a one-way communication delay of about 55 seconds,"

During the course of next 210 days, ISTRAC will carry out a few course corrections as the orbiter covers the remaining 490 million km. Such trajectory correction manouevres are planned for April, August and September. MOM is expected to be near the red planet around mid-september. Another operation termed as Mars orbit insertion will be carried out on September 24th to insert the spacecraft into an orbit around Mars.

Indian Space research organization reports that the Indian space mission to Mars crossed half the total distance to the red planet from Earth on Wednesday, 9th April 2014, and was very much along the designated helio-centric trajectory. At exactly 09.50 am (IST), the Mars Orbiter Mission spacecraft crossed the mid-point of its path to Mars, thereby has travelled 337.5 million km in its elliptical orbit around the sun. It now takes four minutes and 15 seconds for a message to reach the spacecraft and return.