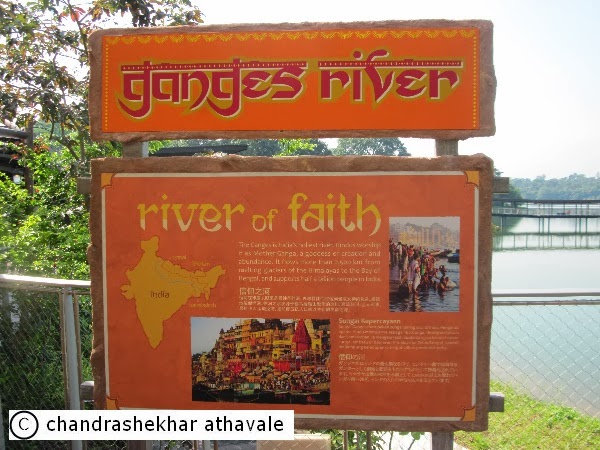 The latest addition to Singapore's tourist attractions is a river themed wildlife park for river dwelling animals, aptly named as 'River Safari.' The 'U' shaped theme park has been created on both sides of a bay of water, fed from Upper Seletar Reservoir. As visitors enter the park and walk along a well laid path, they can see the tranquil bay water on one side and number of water ponds with glass walled sides. Each of these ponds is named after a major river system of the world such as Mississippi, Congo, Nile, Mekong, Amazon and so on. Each of the ponds houses marine animals exclusively found in that river system. Because of the clear glass wall on one side, visitors can observe animals like crocodiles, tortoises and off course, various fishes. 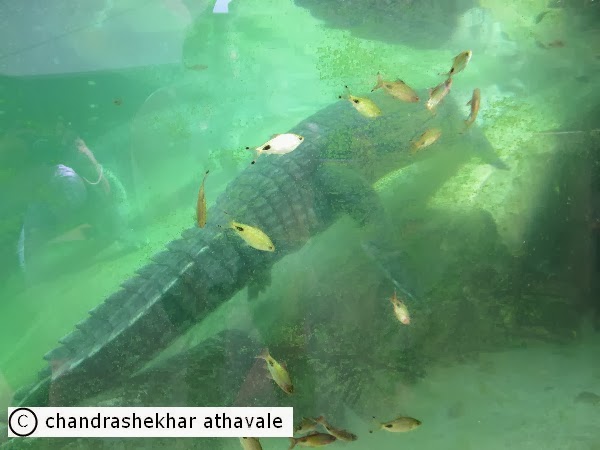 One of the pond exhibits is dedicated to river Ganga, India's most sacred and revered river. A visitor can see here, critically endangered Indian Gharial- a fish eating crocodile and the goonch catfish- a reputed man eater. In the background of the pond is a structure, which looks like an Indian temple with series of steps, which are known in India as temple 'Ghats.' Visitors are likely to feel initially, that there is a problem with this particular exhibit, because unlike other exhibits, where visitors can clearly see the marine life through clear glass and crystal clear waters, in the Ganga exhibit, the marine life looks unclear and foggy. A visitor may think first that the glass side wall has not been cleaned properly. But that is not the case. Glass is cleaned every day. The problem lies with the water itself, being murky and highly polluted. A sign nearby explains, that the park authorities have taken care to keep the waters in the pond truly like that of the original river- highly polluted - and that is why the visibility is so poor. This perhaps is the best way to tell the world, how polluted the waters of the Ganga river actually are.

Ganga is one of the largest river systems of the world. This river rises in the western Himalayas in the Indian state of Uttarakhand and flows for 2525 Km to south and east through the Gangetic Plain of North India into Bangladesh, where it empties into the Bay of Bengal. It is the longest river of India and is the second greatest river in the world by water discharge. The Ganga basin is world's most heavily populated river basin with more than 400 Million inhabitants. The population density in this basin is a staggering number of 390 inhabitants per square Kilometers.

Hindu mythology considers the river Ganga as a divine mother and is worshiped as a Goddess that purifies the soul and brings new hope to the worshiper. Hindus would put few drops of Ganga water in the mouth of a dying person to absolve him of all the sins. Yet the same river, considered as ultimate form of purity, is almost dead and is now struggling to survive and breathe freely as unimaginable quantities of garbage and filth flow into it.

The main factors responsible for polluting the river are, industrial effluents, run-off from chemical fertilisers and pesticides used in agriculture, huge quantities of solid wastes released in the river, drainage from cities and towns discharged in the water, a large number of animal carcasses and hundreds of human corpses thrown into the river everyday and finally the faecal matter or human waste, that gets thrown in the river. Most of the people living in the Ganga river basin, have no sanitary facilities. They are forced to use the river for their ablution because there is no other way. This keeps fouling the river water and turning it into a source for spreading diseases. 2011 census has found out that there are about 131 million households in India that have no toilets on their premises, with eight million using public facilities and 123 million just defecating in the open. These numbers indicate the gravity of the situation. 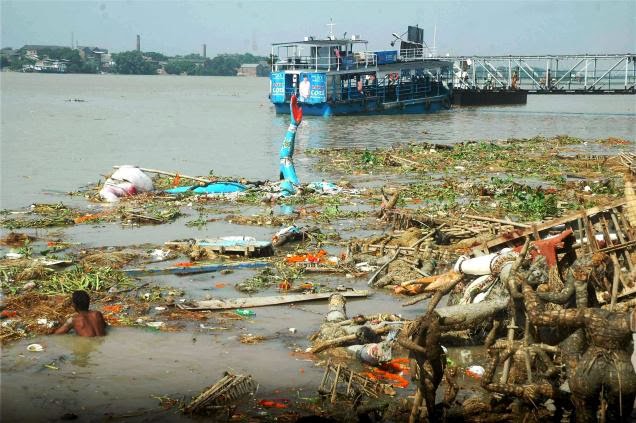 There is more bad news for the people, who believe that the Ganga water is the purest and cures all the ills. Experts from UK’s Newcastle University and the Indian Institute of Technology, Delhi, led by professor David Graham , an environmental engineer based at Newcastle University, sampled water and sediments at seven sites along the upper Ganges in the months of May-June 2013, when millions of pilgrims travel to towns like Rishikesh and Haridwar to worship the Ganga as a mother Goddess.

The teams findings show that besides high levels of other contaminants in the water, the levels of the most deadly form of superbugs that are resistant to drugs are about 60 times higher,when millions of pilgrims travel to the river than other times of the year. The multi-drug resistant superbugs, found in Ganga waters, include the deadly NDM-1 virus also.

The NDM-1 virus was first identified in New Delhi and coded by the resistant gene blaNDM-1 . Until recently, strains that carry blaNDM-1 were only found in clinical settings or hospitals but in 2008, blaNDM-1 positive strains were found in surface waters in Delhi. Since then, blaNDM-1 has been found elsewhere in the world, including new variants. 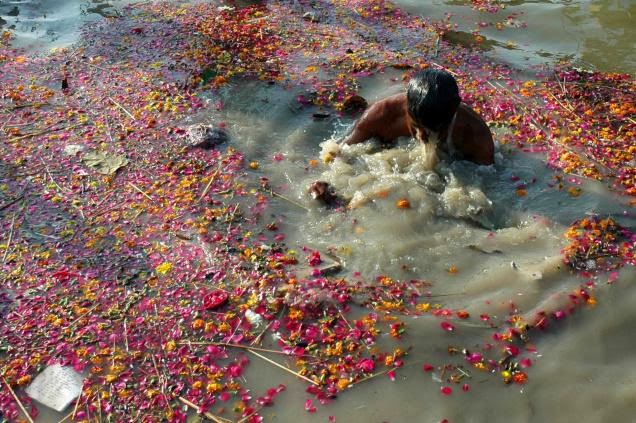 Professor David Graham says that the temporary visitors from outside the region, overload local waste handling systems, which seasonally reduces water quality at the normally pristine sites. The study found overloading of waste treatment facilities as a factor to blame along with many cases, where untreated sewage was going straight into the river, where the pilgrims bathe. He adds:

"The bugs and their genes are carried in people's guts.If untreated wastes get into the water supply, resistance potential in the wastes can pass to the next person and spiraling increases in resistance can occur. This isn't a local problem - it's a global one. We studied pilgrimage areas because we suspected such locations would provide new information about resistance transmission via the environment . And it has - temporary visitors from outside the region overload local waste handling systems, which seasonally reduces water quality at the normally pristine sites." He blames excessive use of antibiotics as the principal cause for this and adds:

"What humans have done by excess use of antibiotics is accelerate the rate of evolution , creating a world of resistant strains that never existed before. Through the overuse of antibiotics, contamination of drinking water and other factors, we have exponentially speeded-up the rate at which superbugs might develop. For example, when a new drug is developed , natural bacteria can rapidly adapt and become resistant ; therefore very few new drugs are in the pipeline because it simply isn't cost-effective to make them."

What needs to be done then? How to protect the people visiting and living at these sites so that we make sure that the spread of resistance genes that promote life-threatening bacteria is achieved without any interference with important religious practices that are carried out by the people. Professor David Graham suggests that this can be done simply by improving waste management at key pilgrimage sites.

What is needed is a silent sanitation revolution to be undertaken on the banks of river Ganga, to improve waste management and to make her pure and free again. It is as simple as that!