Feeling stressed? It's all in the Brain! 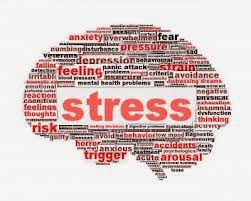 This morning I received a frantic message on whatsapp about solving an arithmetical problem, from my daughter, who was confronted with it by her own daughter (obviously my granddaughter) studying in primary 3. The problem was really simple yet very confusing and had made both of them (my daughter and granddaughter) stressed. Fortunately, I was able to find a solution rather quickly and managed to mail it to her. This is not for suggesting that my arithmetical problem solving capacity is any way substantially better than either of them. It was just a case, where they had lost their way and cool in solving the problem and had got all stressed up, whereas, I was looking at the problem freshly and just managed to hit on a solution.

This little incident made me thinking about stress in our minds. Why do we find some simple tasks very painful and others very delightful. As an example, the very idea of visiting a Government office, makes me terribly stressed, though I do not know for what reason? Talking in generalities, take shopping as an example. Most of the men hate this and if they have to enter a shop, they would quickly pick up whatever they want, pay up and leave the shop. This behaviour is exactly contrary to what most women would do, who can visit a shop, spend hours there and might leave without even buying anything; saying that there was nothing available that was of their choice.

I came across recently an on line survey, being carried out by a publication to find out, which task is considered by the people as most stressful? It had mentioned six categories of tasks like cleaning,cooking,shopping,childcare,bills/finance and home maintenance; a list of fairly mundane routine tasks. I immediately realised that even a thought of doing any of these things except bills/finance and home maintenance to some extent, is creating certain stress in my mind. I decided to check up with my wife. Her feelings were exactly opposite. She said that she does not feel stressed at all with the idea of doing cooking, cleaning or childcare. She would rather enjoy shopping instead of being stressed. But if she is ever given responsibility to do something that concerns bills/finance or home maintenance, she would hate it and loathe every moment of doing it. 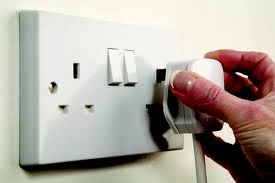 This is something unimaginable. The tasks, for which I have no enthusiasm at all, my wife finds them interesting and its the other way for tasks which I find easy going. How can that happen? I first thought that it has something to do with our age and experience of last many years. I therefore decided to check with a younger couple. Surprisingly, the response was somewhat similar. This means that there is a fundamental difference in the way, men and women think about everyday life.

In an article written in the magazine, “The Wall Street Journal,” titled as “ Why mom's time is different from dad's time,” Jennifer Senior, a contributing editor at New York magazine arrives at very interesting conclusions that are very similar to what I found. She says: “ The fact is, men and women experience their time very differently.” This really means that the conventional American division of household work on 50:50 basis, though appearing very just and proper, in fact is not a very happy way of division of work. Jennifer explains it saying that some tasks (such as child care) require more effort and emotion than others (washing dishes, for example), and are potentially more stressful as a result. Which is perhaps the reason for men preferring to do dishes than putting kids to bed. 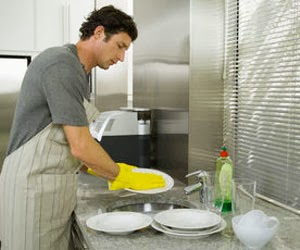 In the Indian context, in spite of all the talk of empowerment of women, most of the women give preference to do all the household work and most men for the jobs outside the house. Even modern empowered women do not like their husbands doing only household work and would prefer to carry out at least some tasks in the household, even if they have a full time job. In the case of such families, where both husband and wife go to work, if the division of labour in the household is arranged in such way that tasks assigned to both are least stressful, there is a certain bliss in the household. This happens I think, because what I have said above. AS an individual, we find some jobs more stressful than others .

It may not be wrong therefore to conclude, that finally everything is in brain and tasks themselves are never more or less stressful. Surprisingly, funny thing is that a man's brain works in a particular way, but his wife may not necessarily be agreeable to that way.