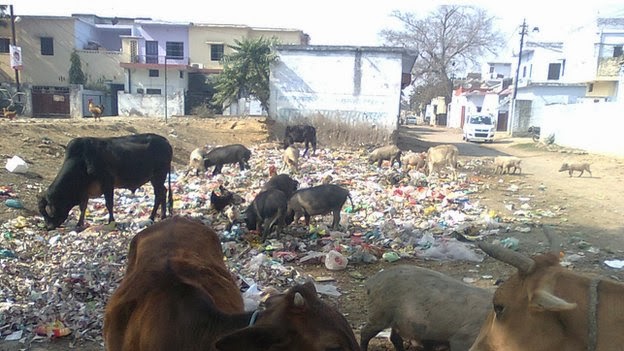 My home city of Pune has a decalared policy about city garbage, under which, the local Government has set up a Solid Waste Collection and Handling cooperative of waste-collectors known as SWaCH - Waste Collectors' Cooperative, for undertaking door to door collection of biodegradable and non biodegradable solid waste from households, shops, offices and other commercial premises. It is a novel idea and appears to be working well. This Cooperative of wastepickers is a professional service delivery organisation within the broad framework of developing business models that are inclusive of the poor. It has been conceived as a professionally managed social enterprise of the poor in the area of waste management that includes collection, resource recovery, scrap trading and waste processing. It is an autonomous entity but functions under the aegis of the Pune Municipal Corporation (PMC) and is financially supported by it for a period of five years during which, it is expected to explore revenue sources and become a revenue earning model.

With formation of this cooperative, the municipal corporation also decided to do away with open type garbage collection bins kept on the roadside in a slow and phased manner. In my neighbourhood, only two such garbage bins still exist, which are really an eye sour for otherwise clean landscape. The problem exists mainly with citizens, who carelessly throw away garbage without taking care that it is properly dumped in the bin. The garbage bins are usually overflowing but are cleaned up by the municipal corporation each day and I hope that sooner or later they would be removed as per declared policy.

Though things are fairly under control in my home city, as far as garbage collection is concerned, same can not be said to be true in most other cities in India. Kanpur is an historic city in north Indian state of Uttar Pradesh. The city may have a glorious history, but the present state of the city is pathetic and deplorable as far as garbage collection is concerned. Patel Nagar is a neighbourhood in Kanpur, where about 100,000 residents live, but there are no formal arrangement by the Kanpur municipal corporation to collect waste from people's homes because according to it, the corporation was not responsible for the area. People therefore simply throw their rubbish by the side of the road and a local authority truck picks it up once or twice a month and dumps it outside the city. 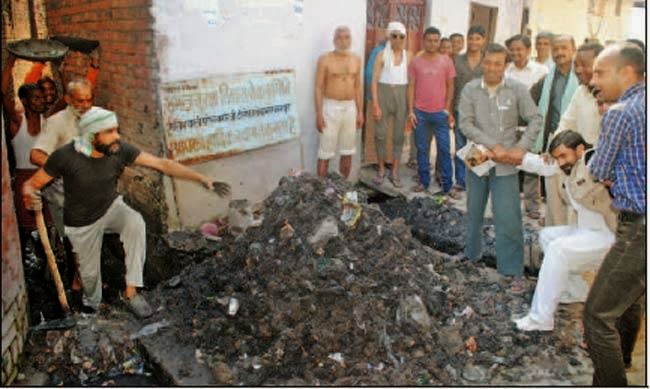 However since last two months, overflowing drains and piles of litter has not been cleared by the authorities. Piles of garbage has collected in front of people's homes and heaps keep growing bigger and bigger, the water from choked drains had begun to enter people's homes. The sweepers would go there, but they wouldn't do any work of cleaning. On several occasions, the residents have complained to the authority, the Kanpur Municipal Corporation, about the situation, without any action forthcoming. The residents have become so much frustrated and angry at the build-up of mounds of waste and rubbish heaps that finally they decided to take the matters in their hands on Tuesday 5th February 2013, and started removing rubbish and cleaning drains themselves.

Mr. Manoj Yadav is an elected local councillior or corporator from the Patel Nagar area of Kanpur. By his misfortune, Mr. Yadav happened to visit that area at the same time. After seeing him there, the angry residents caught and accosted him and then pushed him on the garbage heap and held him there to take out the frustration and anger over unhygienic conditions prevailing in the area until he promised to arrange for the authorities to attend to the area. He says: "Some people pushed me into the garbage heap, it was wet, and they did not let me come out of it for an hour. I thought about stripping and jumping into the drain to clean it. But some women from the area intervened and set me free."

Perhaps keeping his eyes on the next election, Mr Yadav has decided not to lodge an official complaint against those who pushed him onto the rubbish heap. On the contrary he is sympathetic towards the Patel Nagar residents and says: "Diseases have begun to spread in Patel Nagar, five people are ill. I promised them I'll do something and pledged to get the locality cleaned within a couple of days.. I can understand their anger. Also, I have to live with them."

After his horrific experience, Mr. Yadav might not visit his constituency in future unless the garbage is removed.