Where the hell was Dhenukakata?-Part III 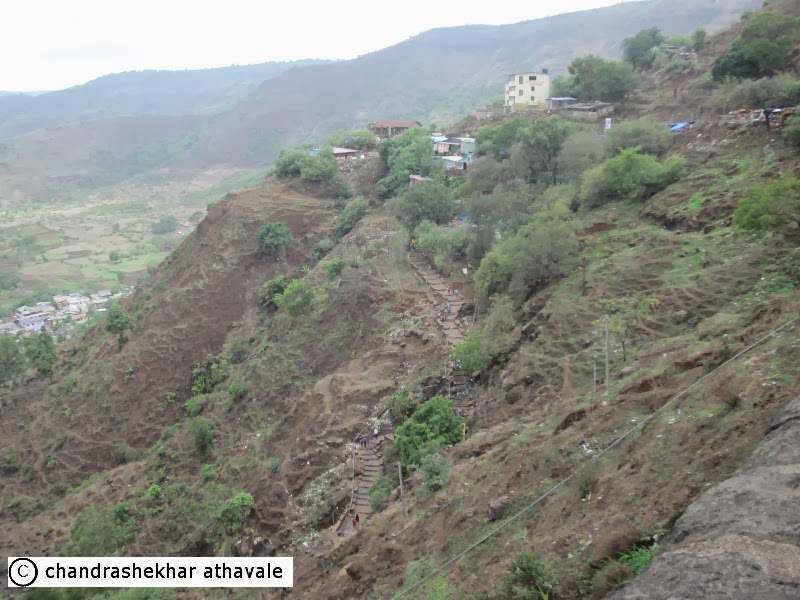 (View of Karle'n valley from the Monastery)

Before we proceed further in our quest to locate Dhenukakata, which existed at the beginning of our era, let us summarize what we already know about this town. It was a prosperous trading community with many Greek ( or Roman)  settled in it as traders or mercenaries. They even had a traders association representing the traders. It was located on one of the trade routes leading to empires of the Deccan and it was in the vicinity of Karle'n monastery.

Based on these facts, it may not be erroneous to come to a conclusion that Dhenukakata traders probably handled the import-export trade mainly that took place between Empire of the Deccan on one hand and Greco-Roman empire on the other. This naturally brings up a question; was the trade volume that possibly existed at that time between Rome and Pratishthan (Today's Paithan), justifies the establishment of a prosperous trading town that too just only on one of the possible trade routes to the Deccan. 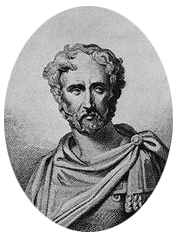 Gaius Plinius Secundus (CE 23 – CE 79), better known as Pliny the Elder ( a Roman author, naturalist, and natural philosopher, as well as naval and army commander of the early Roman Empire) has commented while remarking about the adverse balance of trade of the Roman empire: “This is the price we pay for our luxuries and our women. At the last reckoning one hundred million sesterces are taken away by India, Seres and Arabia.” Every year up to 40 ships carried luxury goods consisting of half the export trade of Rome between Rome and India. The imports from India included spices, pearls, muslin,ivory etc, while exports to India were very few and consisted mostly of wine, musical instruments, singing boys and dancing girls. The balance of trade was so adverse that Rome had to pay in Gold Bullion to India every year.

I have specifically given these details here, just to highlight the fact that trade volume with Rome was exceptionally high and fully justifies existence of booming trading communities like Dhenukakata on Indian soil. The next question that pops up is about the trade routes that were in existence at that time. If we could know about the trade routes, we might possiblly be able to locate trading communities like Dhenukakata. To trace the trade routes, the better idea would be to start from the sea ports from where obviously, the ships left for Rome and also arrived with their wine casks. Claudius Ptolemy (CE 90 – CE 168) was a Greco-Roman writer of Alexandria, known as a mathematician, astronomer, geographer, astrologer, and poet. He was the author of several scientific treatises, at least three of which were of continuing importance to later Islamic and European science. 'The Geography' (also known as Geographia, Cosmographia, or Geographike Hyphegesis) is Ptolemy's main work. It is a treatise on cartography and a compilation of what was known about the world's geography in the Roman Empire of the 2nd century.

Ptolemy tells us that four major trading ports on India's west coast, carried bulk of the cargo to and from Rome. These included (The names in brackets are the names mentioned by Ptolemy), Bhadoch (Barygaza), Dounga (Salsette island), Sopara near Bassein or Vasai ( Suppara) and finally Choul or Chaul ( Semylla or Cemūla.) Taking these and also Kalyan, which we know was a trading port, as starting points, it should be easy to trace the routes up to the Deccan plateau as they have to pass through one of the mountain passes in the Western Ghat mountain range. Since the Buddhist monasteries were all located near the trade routes, these trade routes also have to pass through the vicinity of one of the monasteries.

Leaving aside the trade route from Bhadoch, which is in any case was far off from Karle'n monastery, the other trade routes must have started either from Kalyan, Salsette or Sopara and or from Choul in the south. Late Dr. D.D.Kosambi has outlined several such routes that might have existed and I quote:
"The northern feeder route starting from Kalyan, Sopara went right along the foot of the western Ghats and reached Junnar town through Naneghat. One possible route might have climbed up Sava or Kurvanda pass near present town of Lonavala and would have passed in the vicinity of Bedse monastery. .Another route came up the vally near today's hill station Khandala and passed in the vicinity of Kondane monastery. However all these routes were difficult and were not popular."

One more route existed in the south, which was most suitable for the port of Choul or Chaul. This route climbed up the Ghat near Mulshi lake of today (This is probably the same pass that is known as 'Tamhani Ghat' today.) and passed on through Pavna valley in the vicinity of Shelarwadi monastery and finally reached Bhaje and Karle'n monasteries. From here the route skirted the hills past the foot of Karle'n caves through Navlakh Umbar village, Chakan and then merge in the route to Junnar town. This also perhaps explains a solitary donation from a Dhenukakata resident to Shelarwadi Monastery. 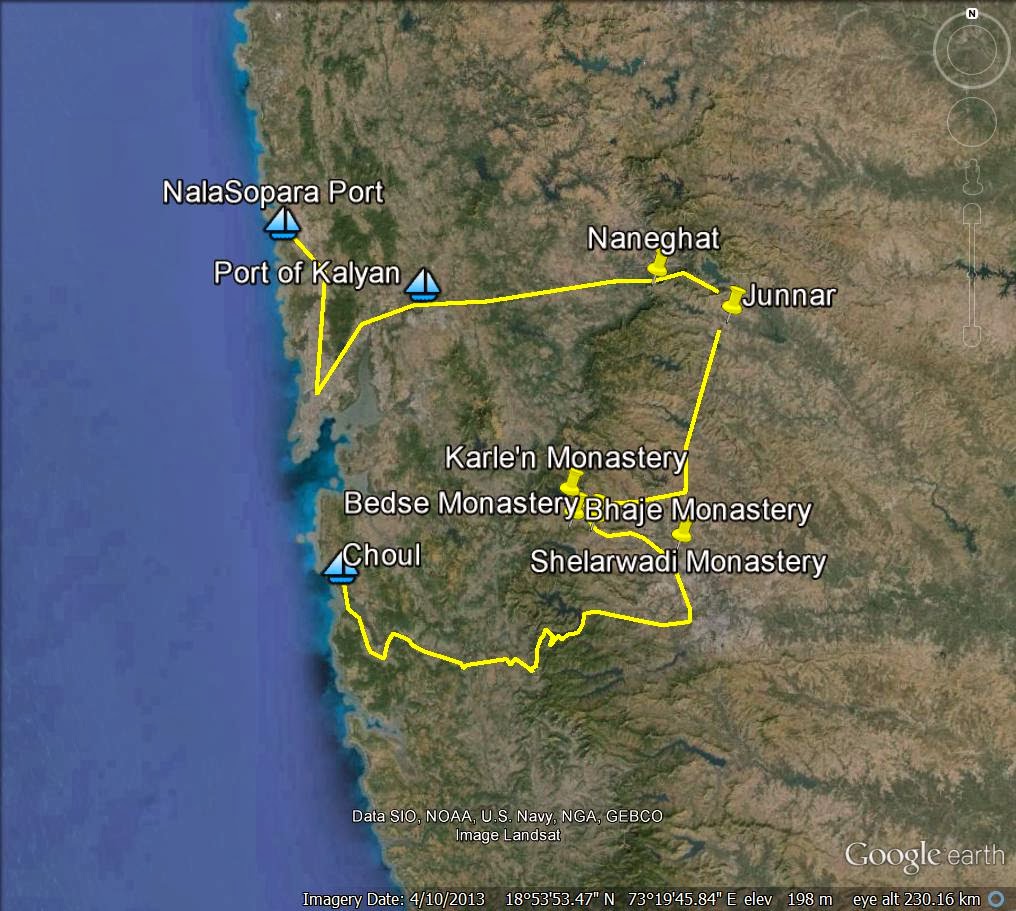 I have tried to trace these two major routes on a Google earth map and it can be seen easily that the Naneghat route is much shorter for reaching Junnar, which any way was the main centre for commerce during those days. Any one would wonder then, why the route starting from Choul and passing by the Karle'n monastery was taken by the traders, when it was much longer and troublesome. It would have been almost impossible to find an answer to this but for a short explanation given again by another ancient Greek text “Periplus of the Erythraean Sea.' This text was written between 1st and 3rd centuries CE and describes navigation and trading opportunities from Roman Egyptian ports like Berenice along the coast of the Red Sea, and others along Northeast Africa and the Indian subcontinent. 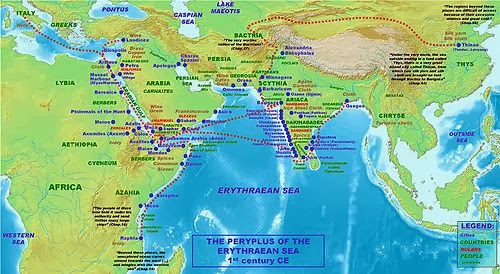 I have mentioned above, that at the beginning of our era, the political situation in the Deccan had become highly turbulent with Satrap Nahapana's forces having captured major chunks of Satavahana empire including the areas near Karle'n monastery. Nahapana's forces also had gained control over coastal areas and the ports like Kalyan. Periplus text confirms this situation and says:

“The market-towns of this region are, in order, after Barygaza (Bhadoch): Suppara, (Sopara)and the city of Calliena (Kalyan), which in the time of the elder Saraganus (Satavahanas) became a lawful market-town; but since it came into the possession of Sandares (Kshatraps or Nahapana's forces), the port is much obstructed, and Greek ships landing there may chance to be taken to Barygaza (Bhadoch) under guard. Beyond Calliena there are other market-towns of this region; Semylla (Chaul)..…” A century later, Claudius Ptolemy again confirms the political situation when he does not mention the Kalyan port ( now unsafe because of the war like situation) at all, and mentions only Souppara (Sopara) mouth of the River Goaris, Dounga (Salsette island), mouth of the River Bêndas, and Semyla or Chaul. 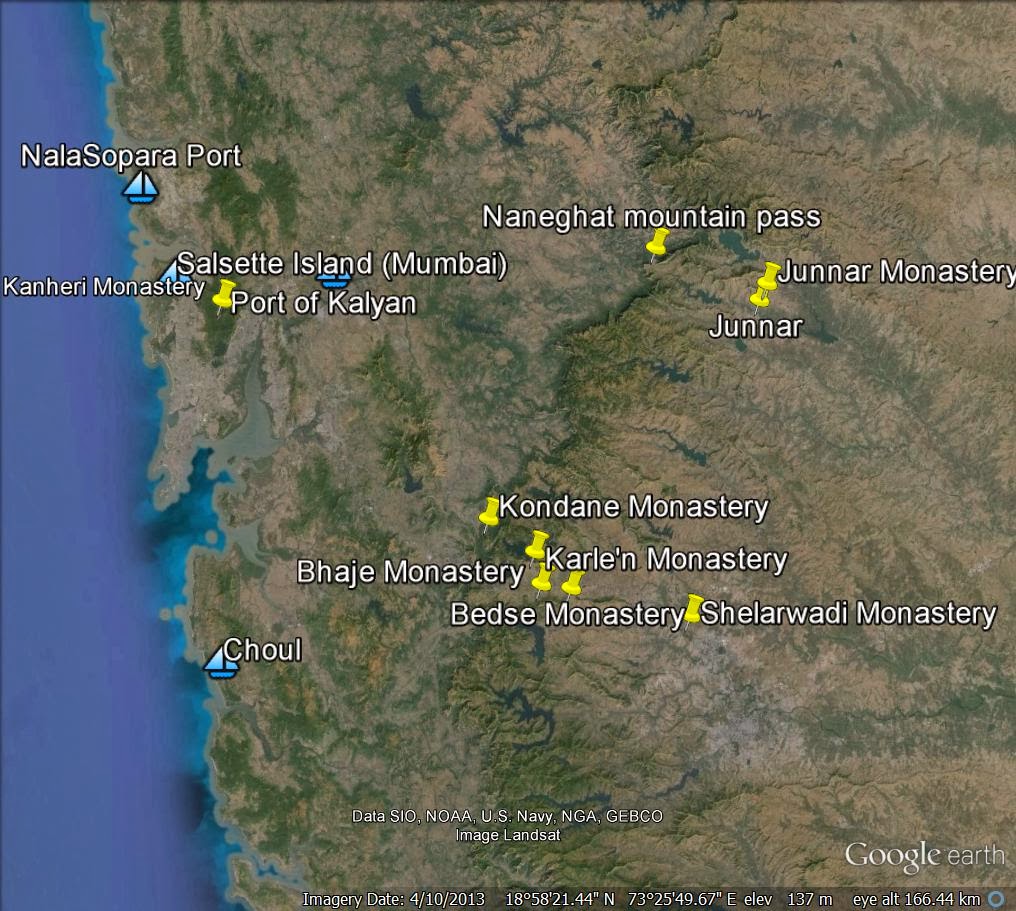 (The trading ports and the Buddhist Monasteries of Satavahana period)

I think the readers would now appreciate the situation in the first century CE, when Greek or Roman ships were unable to load/ unload their cargoes at 'Kalyan.'  Sopara was to the north and inconvenient, so they were forced to use southern ports like Salsette island and Choul. This also made the shorter 'Naneghat' route to Junnar town no longer preferable as it was much to the north of the port of lading, Choul. The southern route from Chaul and through 'Tamhni' pass must have become suddenly popular for this reason and with it grew the importance of the largest monastery in the area, the one at Karle'n.

We shall now try and see if we can locate the Trading boom town of Dhenukakata, which was possibly situated somewhere on this trade route.