Where the hell was Dhenukakata? -Part II 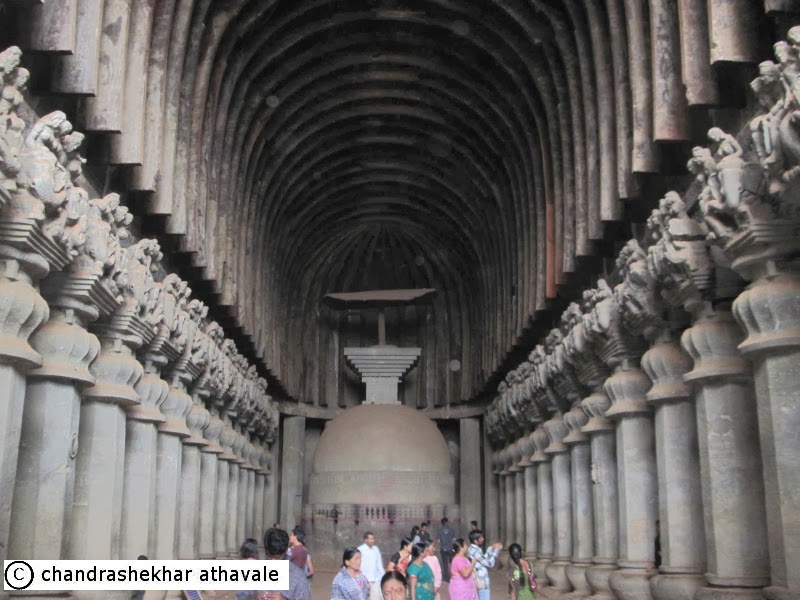 (Main Chaitya hall at Karle'n caves, The supporting pillars have inscriptions indicating names of the donors)

To continue with our quest for the mysterious town of Dhenukakata, it might turn out to be a good idea to see if possible, who were the people living there, who had generously contributed in the construction of this Buddhist Monastery on a hill slope near present day village of Karle'n. Incidently, as seen from the inscription (No. 8) carved on the facade of the Chaitya by King Pulumavi, the present village of Karle'n and the ancient Buddhist Monastery nearby, were known as Valuraka Village and Valuraka Monastery.

These are the donors from Dhenukakata:

A carpenter, who calls him Sami and son of Venuvasa. He made the wooden door to the cave and did it at his own expense.
A Yawana (Greek) resident called Dhamma.
Another Greek resident called as Simhadhwaja.
A resident called Sommilanaka.
Mitadevanaka, son of Usavdatta. (We have seen earlier that Usavdatta was son-in-law of the Satrup Nahapana.) This means that grandson of the satrup, who ruled most of the Deccan plateau at that time was a resident of Dhenukakata.
Isalaka, who is the son of a trader named as Gola
A Greek resident named as Yasavadhana.
A person who has been a good wife and either has a name as Mahamitaa or whose grandmother is named here (Inscription is unreadable)
Dhammadevi- granddaughter of a nobleman Asoka
A physician named as milimdasa, his wife Jayamitaa, his sons Bhayabhuti and Nabubuti and daughter Vasumitaa.
Utaramati, wife of Drughmita.
A Greek resident Kulaykhann.
Rohanmita on behalf of his younger maternal uncle Agila.
A Greek named as Dhamadhaya. (This inscription appears on a pillar, capitol of which has a figure of Sphinx.)
Trader's association (vaniya-gama) from Dhenukakata. (This might be one of the earliest reference to a traders association or chamber)
Simhadata, a perfume merchant from Dhenukakata 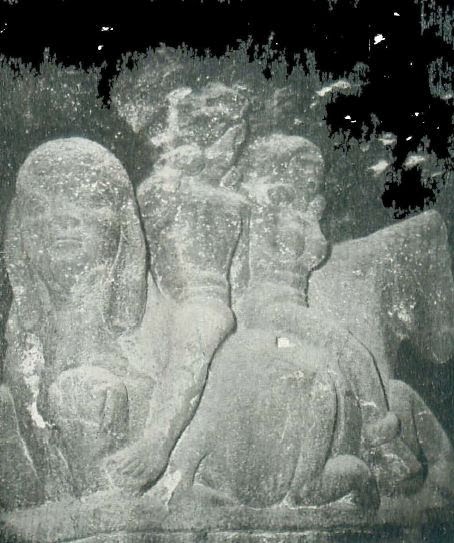 (Sculpture of a sphinx on the capitol of a pillar donated by a Greek.)

From above descriptions, we can get a fair idea about the people, who stayed in Dhenukakata. There must have been a number of people of Greek or Roman origin, who may have been mercenaries in the army of Satrup Nahapana as suggested by a researcher Samuel Clark Laeuchli. Alternatively they could be   traders, who must have settled here as suggested by D.D.Kosambi and M.K.Dhavalikar. Whatever was their profession, we can see at least 5 Greek donors here. Greeks were Roman citizens then. Would it mean that the Dhenukakata was a Grecco-Roman settlement on west coast of India? There are professionals too like a wealthy carpenter, a physician and a perfume merchant. What is most surprising was the fact that there was a trader's chamber in Dhenukakata, which indicates that it was essentially a trading community.

We shall turn to a bit of history here, to appreciate the significance of one of the inscriptions mentioned above. Satavahana kings came to sovereign power in the Deccan plateau only after demise of Emperor Ashoka in the north, around 220 BCE. It is believed that they were vassal kings under him earlier. After a stable rule of two centuries or so, the political situation turned turbulent as a descendent of Indo-Scythians, Nahapana, who always called himself a satrap, rose in northeast in the first century CE and slowly captured major chunks of Satavahana territories, including the ones surrounding the Karle'n monastery. He had probably appointed his son-in-law Usavdatta as Governor of the Satavahana territories. It is believed by some historians that Bhadoch city in Gujarat was the capital of Scythian Satraps. 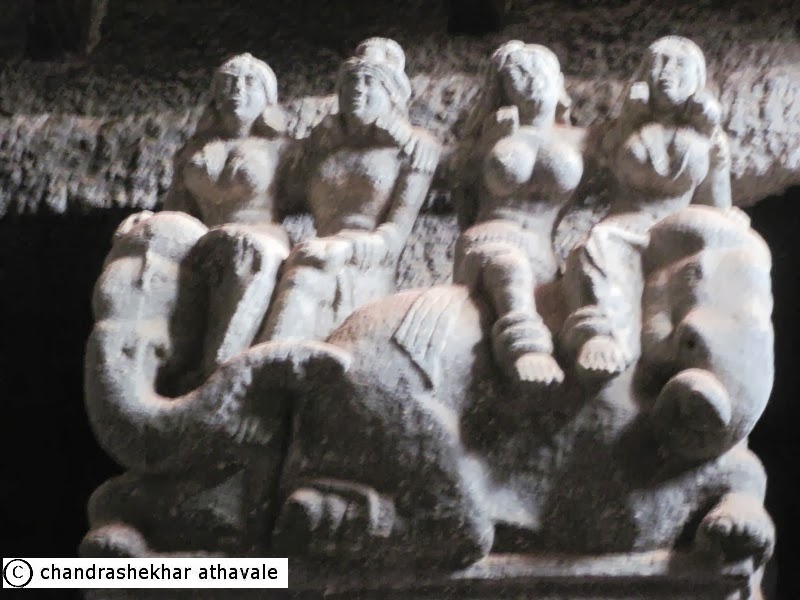 (Sculpture on a capitol)

Where Dhenukakata fits in all of this? The inscription mentioned above tells us that one of the son of Governor Usavdatta, named as Mitadevanaka was actually a resident of Dhenukakata, which shows that it must have been an important town as the Governor had stationed his own son there.

With all these details, a picture emerges of a town: located on one of the important land trade routes between the Deccan plateau of India and the Grecian-Roman empires. The town had a large trading community, who had their own association or a chamber in the town. Professionals like Carpenter, physician and a perfume merchant reside in the city. But why Karle'n monastery was so much important to the people of this flourishing town and why they paid substantial amounts for upkeep and beautification of this only monastery, even though there were at least three more monasteries in the vicinity at Bhaje, Shelarwadi and Bedse? 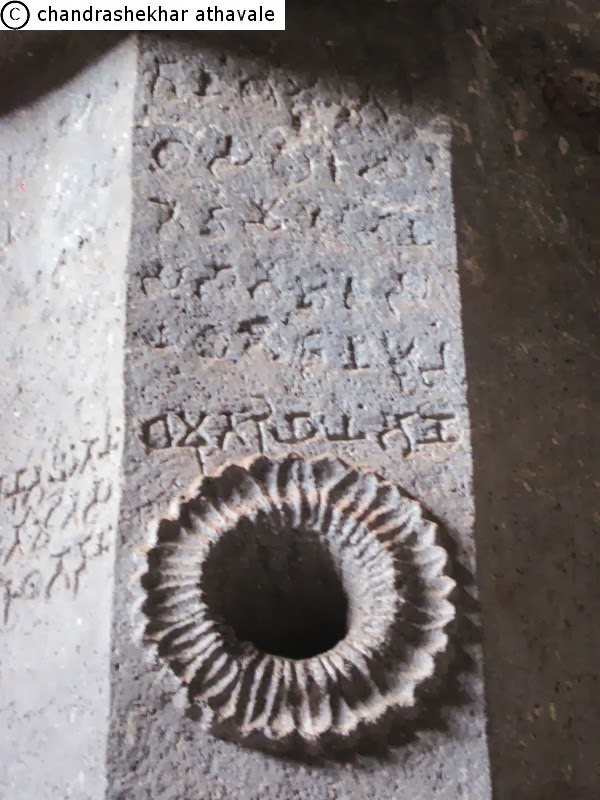 (Inscriptions on a pillar)

The importance of monasteries in those days to the traders has been well explained by Late Dr. D.D. Kosambi (whom I have quoted earlier) in one of his articles; he argues:

“ It is clear from the inscriptions and the Chinese Budddhist evidence, that the intimate connection between the rich monastery at Karle'n and the wealthy merchant settlement at Dhenukakata had a soild economic foundation. The mercantile function of the monasteries was not only the purchase of cloth and other commodities for the monks and the retainers and the buying of the costlier materials for the rituals and ostentation but also the supply (for profit) of essential provisions and the loan (at interest) of indispensable capital to the trade caravans. The great market centers of Satavahana empire were sparsely distributed; their interconnecting trade routes passing through wild, thinly settled and difficult country. The caves were located conveniently near the worst stage of the journey. The monasteries were untaxed and their possessions not in danger of arbitrary confiscation by officials. ” 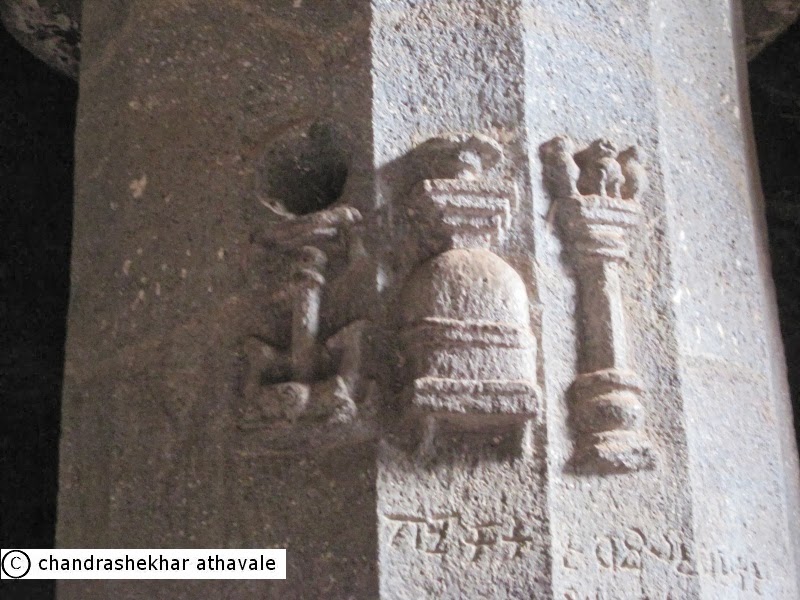 In other words, the monasteries (like the one at Karle'n), besides providing a ready market for food, clothing and all other essentials for the traders, were also a source of cheap funds for the traders and a sanctuary from the taxmen as well as from brigands. It also becomes very clear from these observations, as to why a close relationship existed between the wealthy residents of the Dhenukakata and the Karle'n monastery.

The simple reason for this close relationship was that the prosperous town of Dhenukakata looked upon the Karle'n Monastery not only as a market for foodstuff and clothing but also a source of cheap funds and a sanctuary. All this means only one thing, Dhenukakata was located somewhere in the vicinity of the monastery at Karle'n and not at a great distance from it. Also, for the state, the town was so important that the Governor had appointed one of his own sons as in charge of the town.