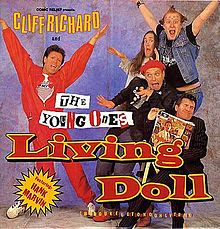 Another Cliff Richard track this week, The song was originally recorded in 1959 by Cliff Richard and the Drifters (later known as Shadows) and produced by Norrie Paramor. It peaked at #1 on the UK singles chart for six weeks from July 1959, selling over a million copies in the process. The song won Bart an Ivor Novello Award for best song. It was Richard's first US hit single reaching #30 on the Billboard Hot 100.

You can also copy and paste the link http://youtu.be/uHQXL8wPsCE in your You Tube App. If that also does not work, search You tube, Cliff Richard Living Doll.