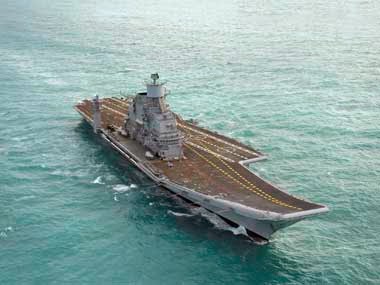 India's largest naval ship, INS Vikramaditya has finally reached its home base at Karwar on India's western sea board, after a 8500 Nautical Miles long, non stop, journey of more than 40 days from Russia. It was commissioned into the Indian Navy on November 16th 2013 at the North Russian shipyard of Sevmash at Severodvinsk. The top deck of this 44,500-tonne aircraft carrier is as big as three football fields put together. The ship has 22 decks and more than 1,600 personnel are on duty on board. The warship has been inducted into the Navy after a delay of almost five years and a cost over-run of almost $1 billion.

Earlier, on the eve of the new year day, the aircraft carrier, still 1200 nautical miles away from India's shores, was given a grand welcome by Navy. As the ship had sailed from Russia without its protecting cover of aircraft on board and surface to air missiles still to be commissioned, three Indian naval ships, INS Trikand, which is a Talwar class frigate, INS Delhi which is a Delhi class destroyer and INS Deepak, the fleet tanker, were sent from India all the way to Russia to escort the giant ship home.

When INS Vikramaditya, commanded by Captain Suraj Berry and accompanied by three other naval ships, entered into the Indian Navy’s area of operation in north western Arabian Sea, it was welcomed by ships of western naval fleet, consisting of India's older aircraft carrier INS Viraat, two Delhi class destroyers, three Trishul class stealth frigates, a Godavari class frigate and a couple of offshore vessels. It has been reported by the press that the entire scene on high seas was one to watch and behold. The naval guns boomed to welcome the new addition to the fleet. After the ceremony was over, all ships set sail to return to India. 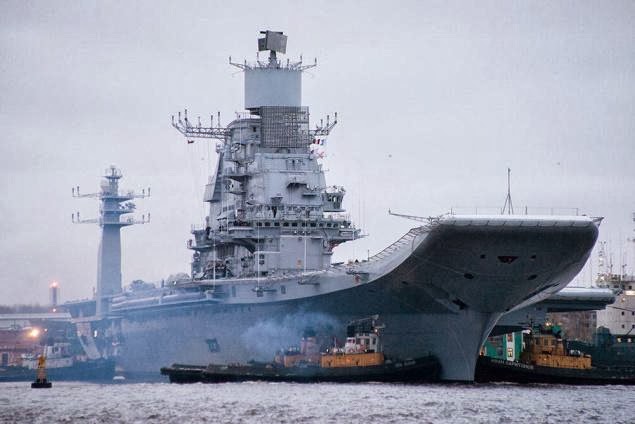 The $2.33 billion ship, escorted by several frontline warships of the Western Fleet, is now anchored off Karwar and is waiting for suitable tidal condition to enter the port for a berth. The MiG-29K fighters that will form the carrier-borne air squadron on the INS Vikramaditya have already arrived in India way back in 2010 ahead of the mother ship and were commissioned in May 2013 in the Navy’s 303 Squadron. The squadron would require some time to perfect taking off from the decks of the new carrier and touching down, using the arrester wire technology. Only after that happens, the ship would be fully operational. The aircraft carrier is expected to take at least three to four months to get fully integrated in the force.

INS Vikramaditya is like a floating city of 1600 personnel. This floating city requires nearly a hundred thousand eggs, 20,000 litres of milk and 16 tonnes of rice every month to sustain. It can be at sea continuously for 45 days and is capable of undertaking operations up to a range of over 7,000 nautical miles or 13,000 km. 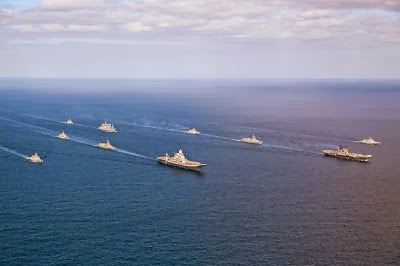 When the ship is integrated fully, the Indian Navy would have two operational aircraft including the aging INS Viraat. However INS Viraat has become very old and is likely to be decommissioned in the next few years. Indian Navy hopes that by then India's first indigenous aircraft carrier, that is being manufactured in Cochin, would join the Indian fleet so that the Navy shall continue to have its two carrier fleet for all the times in future.

p.s. Chief of the Naval Staff Admiral Robin Kumar Dhowan announced on 7th May 2014 that the newly inducted aircraft carrier, INS Vikramaditya, is now operationally deployed and its integral MiG-29K fighters have been fully integrated with the carrier.