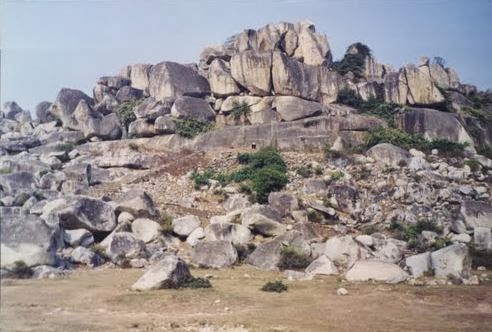 Xuan Zang, the great Chinese monk, who had made a land journey to India in the seventh century CE, has written down about many places of Buddhist interest in India, which were thriving at that time. Since Indians themselves never kept any written record, most of the times, Xuan Zang's travelogue turns out to be one of the most important record that describes such places in ancient India.Around year 631 CE, Xuan Zang was travelling in the country of 'Magadha.' (Bihar State of India). During his travel from 'Patna' to 'Gaya', he came across a University which he calls as 'Tiladaka.'  Xuan Zand describes this university in following words (Beal Translation):

“To the south-west of the old Sangharama about 100 Li, is the Sanghrama of Tiladaka (Ti-lo-shi-kia). Building has four walls, belvideres of three stages,high towers, connected at intervals with double gates that open inwards (deeply). It was built by the last descendant of 'Bimbisar-raja' (Pin-pi-sha-lo). He made much of high talent and exalted the virtuous. Learned men from different cities and scholors from distant countries flock together in crowds and reaching so far, abide in the Sangharama. There are 1000 priests in it who study the Great vehicle. In the road facing the middle gate there are three 'Viharas,' above which are placed the connected succession of metal rings (circles) with bells suspended in the air; below they are constructed storey after storey from the bottom to the top. They are surrounded by railings, and the doors, windows, the pillars, beams and staircases are all carved with gilt copper in relief, and in the intervals highly decorated. The middle 'Vihara' contains an erect image of Buddha about 30 feet high. On the left is an image of 'Tara' (To-lo) Bodhisattva, on the right, one of 'Avalokitesvara' ( Kwan-tsz-tsai) Bodhisattva. Each of these images is made of metallic stone; their spirituality composed appearance inspires a mysterious awe, and their influence is felt far (Or spreads far). In each of 'Vihara' there is a measure of relics which emit a supernatural brilliancy, and from time to time shed forth miraculous indications.” (100 Li= 33 Km)

We can well imagine how grand this university must have been during those days with 1000 monks studying Mahayana Buddhism teachings. Unfortunately, in the later period, all traces of this great university just disappeared, though historians have predicted, where location of this university could have been. 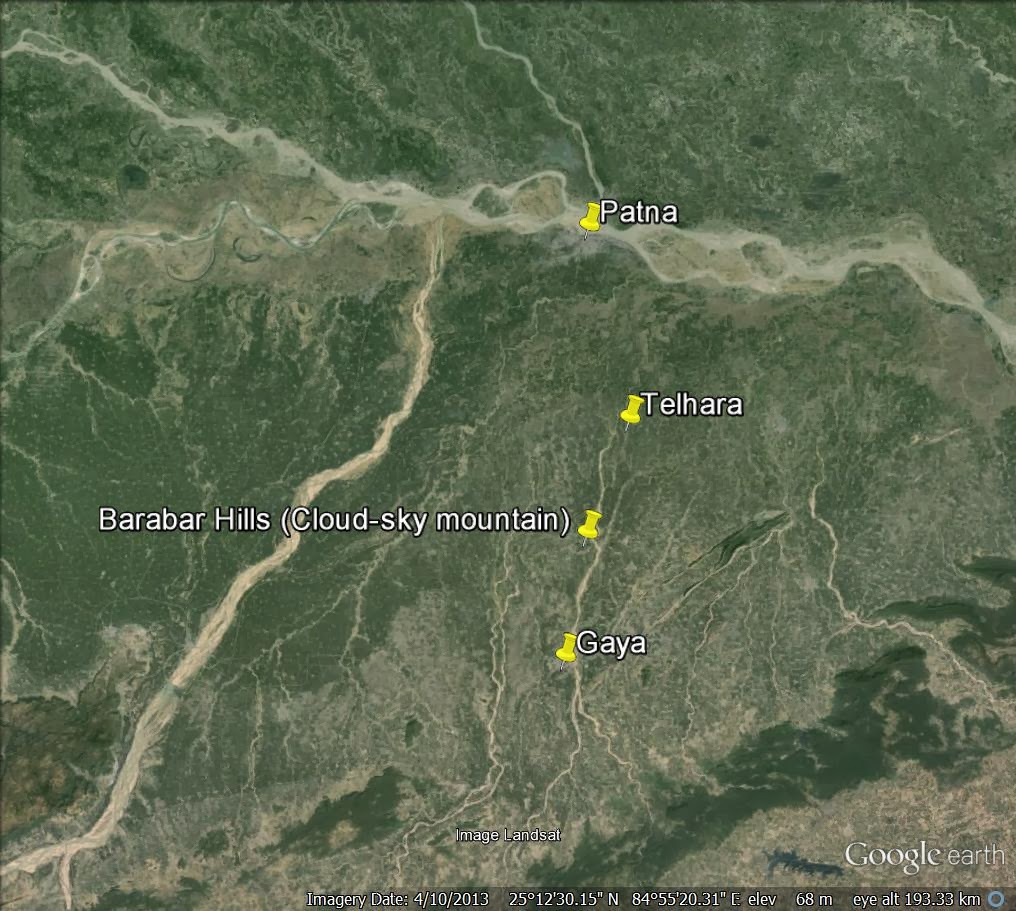 Prof. Samuel Beal, Professor of Chinese in University college of London, translated Xuan Zang's travelogue for the first time in English in the year 1884 and was considered an expert on Xuan Zang. He has noted that:

“ The pilgrim's route from Patna to Gaya is difficult to settle. I (Beal) think that we should omit the passage,” which says that the monk travelled 200 Li south west of Patna to reach an old Sangharama (Monastery) from where the 'Tiladaka' monastery is supposed to be 100 Li away. The figure of 200 Li should be replaced with 10 Li. According to Beal, the 'Cloud-stone mountain,' which Zuan Zang claims to be 90 Li away from 'Tiladata' mostary could be identified with 'Barabar Hills.' 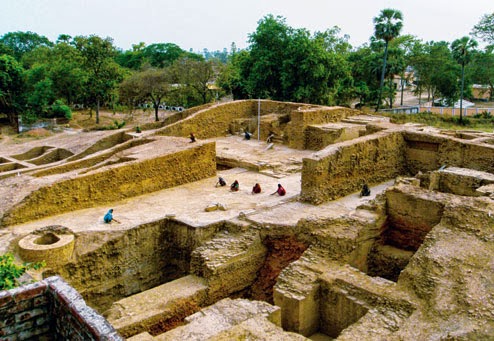 Telhara monastic site was first mentioned in 1872 by A M Broadley, the then Magistrate of Nalanda and letter on 1875-78 by Alexander Cunningham.  A large number of stone sculptures were noticed by Broadley from Telahara. The famous Maitreya and twelve armed Avalokiteswar image are at present displayed in the Indian Museum Kolkata. Perhaps the best known Pala sculpture from Telhara is now in Rietbarg Muzeum, Zurich.

The excavation work at a 45 feet high mound was taken up in 2009 by a team of archaeologists of Bihar state Government, Who unearthed the evidence of three-storeyed structural remains, as mentioned by Xuan Zang. Evidence of prayer hall and residential cells for monks in the Monastery, also have been found in course of the recent diggings. The excavation work was taken up under special interest of the chief minister of Bihar state and the archaeologists now say that they have discovered a huge floor, statues of bronze and stone and over 100 seals at the site, which is spread over a big area and it would take more time for full excavation. 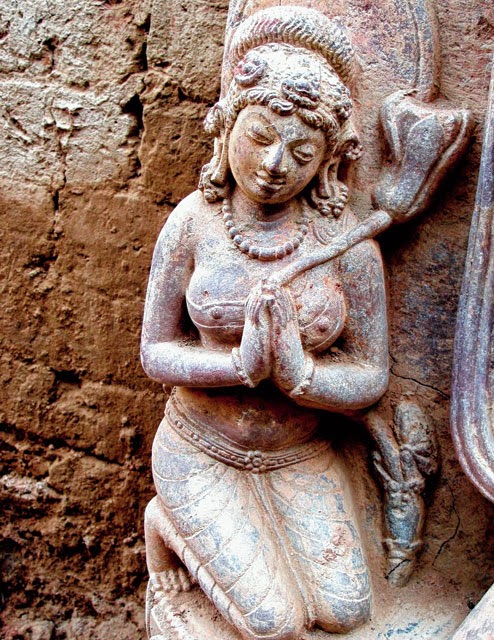 Dr. Atul Kumar Verma, director of state archeology, in charge of the project, says in his report and I quote:

“ A fairly good number of pottery and images belonging to Gupta age to later Pal period have been found. Digging have also revealed a 34 meter long floor lined by a number of cells. The large floor is dotted with a number of platforms with images of Buddha installed on them. A 4' high blue basalt image of Buddha in
Abhay Mudra, another in Dharma Chakra Mudra and miniature images like Hariti, Manjushri etc. have also been found on the floor. It appears to be a prayer hall, mentioned by the Chinease traveller.

A stone plaque with 8 lines inscriptions in Proto-Nagari and a black colour terracotta seal have also have been found on this floor. Another brick paved floor with a wall almost 12' in height has been discovered below this prayer hall in eastern side. Above this floor a well was found in which some broken images of Buddha have been discovered. On the northern side of the mound two brick cells have been unearthed with paved floor. After cutting the floor, a 4.25 mt. sand deposit was noticed after that an exciting discovery was made by findings of N.B.P. Black & Red ware. Another striking feature of the site is that lot of inscriptions in Proto-nagri script were also found on potteries. A small images of Buddha in red sand stone reveals that this monastery was in existence during Gupta period.” 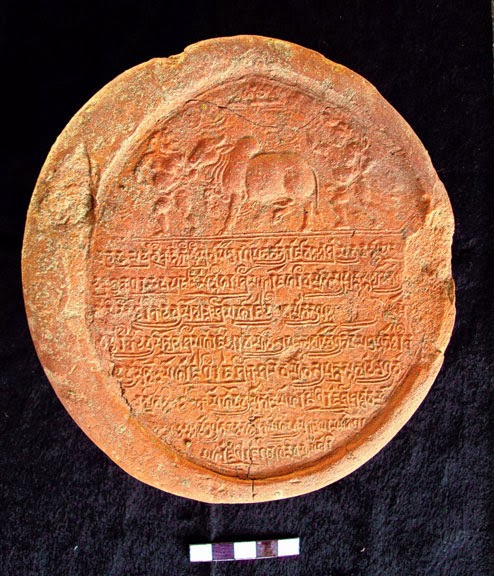 Archaeologists say that the University was set up in the 5th century CE during tenure of 'Gupta' kings. The report also says: “A large number of antiquities, including the basalt image of Yamantak, with seven faces and a stone figurine of Marichi have been found. A unique piece of Terracotta seals with inscription having the symbol of Chakra flanked by deer have been found indicative of monastic seals, besides this more seals with inscriptions, on top of which are the symbol of bull & lions are found. After decipherment of the seals, the date regarding monastery remains can be determined with exact chronology of the site.” The specimens from the site would be housed in the proposed International Museum in Patna, Bihar state. 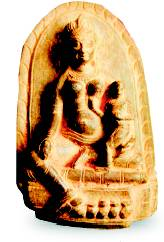 Nobel laureate Amartya Sen visited the site last month and says that this is an impressive discovery. A modern university is being set up at Nalanda at present in an project undertaken by many South east Asian countries along with idea. It may be a good idea to set up a campus of this university at Telhara, perhaps just to remember and celebrate this ancient seat of learning.