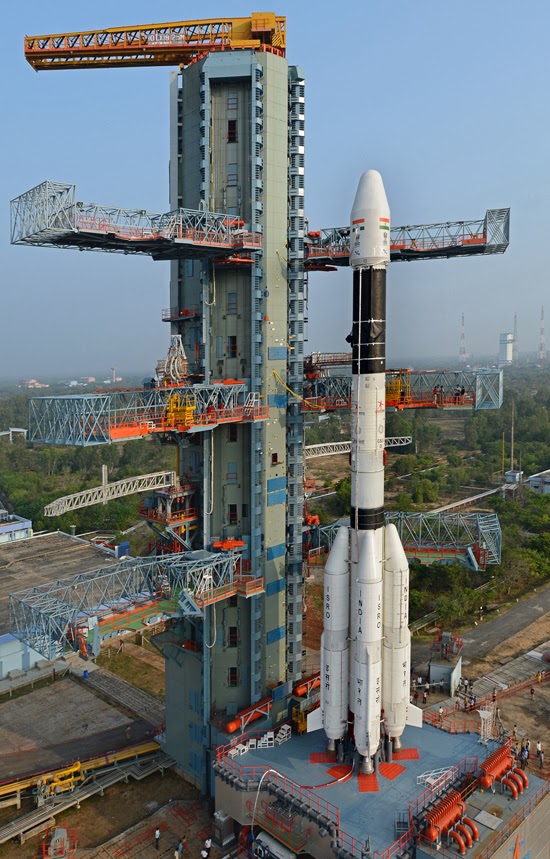 Millions of Indians gave a big sigh of relief on last Sunday afternoon, as the giant bird, weighing more than 415 Tonnes, rose majestically from its launchpad on the east coast of India, roaring with a thunder that reverberated and drowned all other sounds, to fly upwards gaining more and more speed. The great rocket thrusters underneath, producing a thrust of 6773 Kilo Newtons, threw bright yellow orange flames downwards followed by an undulating mass of white smoke that soon billowed out making the entire launch site covered with haze. 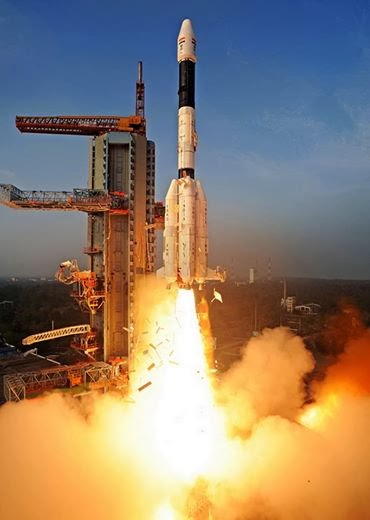 But no one was looking at the launch site any more as the yellow bright spot in the azure blue sky with a trail of white smoke rose up and up and soon disappeared from the vision. For the ordinary spectators, who had gathered around the launch site, the spectacle was over, but for scientists managing the launch control stations, the most agonizing and crucial seconds were yet to begin. As the seconds ticked by, the giant screens in the launch control center, announced that first and second stage rocket motors had extinguished after doing their jobs. But this was routine stuff and no one was really anxious about it. But then in less than five minutes after the lift-off, came the announcement over the speakers that the third stage or the topmost indigenous cryogenic rocket motor has ignited on time. For the next 12 minutes, everyone in the room- buckled under tremendous anxiety and agony- watched the indigenous cryogenic motor work like a dream. Public address system in the launch center kept blaring, “The vehicle is accelerating, …...the cryo performance normal, ...the cryo has shut down, and finally injection condition achieved….” There was unbelievable relief on the faces of everyone in the room as a big applause broke out.

For the scientists manning the stations in the launch control center, sending a rocket up is not a novelty any more with so many rockets having flown out under their expert guidance, but Sunday's launch was truly something special and so crucial that India's future in space exploration depended upon it. Why was it so? And why was that exact part of the lift off lasting 12 minutes, so crucial for future?

To find answers to these questions, we need to go back to our text books of elementary physics. The force, that keeps us earth bound or the gravitational pull of the earth ensures that, just like a stone thrown up falls down eventually, any spacecraft sent up by a rocket, would also eventually fall back to earth. But as a spacecraft keeps on going away from earth, it soon reaches a point (about 36000 Km from earth), where gravitational pull of the earth exactly matches the gravitational pull of the moon. If a spacecraft is placed at this point, it will only move in an orbit with exactly same speed as that of earth. This means that for an observer on earth, the satellite appears stationary all the time. If this point in space is exactly above the equator, the spacecraft it is said to follow a Geostationary orbit. If the spacecraft instead of being placed exactly above equator, is placed at the same height but at an inclination from the equator, the orbit of the spacecraft around the earth is known as Geosynchronous orbit. Naturally a Geosynchronous orbit has an inclination to a Geostationary orbit. It is easy to understand that a satellite in either geosynchronous or geostationary orbit, appears stationary all the time for an observer on earth. Such a satellite would be extremely useful for communications and TV transmissions and all satellites through which we communicate or get TV channels beamed down, are placed in such geosynchronous or geostationary orbits. A geostationary orbit has a radius of approximately 42,164 km (26,199 miles) measured from the center of the Earth.

By now it must be clear to the readers that a powerful rocket is required in both these cases if a satellite or a spacecraft weighing around 2 Tonnes (most common Geosynchronous satellites weigh that much) is to be either placed in a geosynchronous orbit or to be launched for an interplanetary travel. India's workhorse PSLV rocket can not lift a satellite of that weight to geosynchronous orbit height or give this kind of velocity to a spacecraft that weighs more that 1300 Kilograms, simply because it doe not have enough power.

India felt the need of a powerful geosynchrous satellite launch vehicle or GSLV in 1990, when it realised that it needs to launch INSAT class of communication satellites that weighed around 2 Tonnes. Indian GSLV rocket uses major components that are already proven in the time tested PSLV launchers like the S125/S139 solid booster and the liquid-fueled Vikas engine. However the Achilles heel was the third stage rocket motor. The problem with rockets of this class is that during final stages of the flight, they need an engine that can give a high thrust to weight ratio and a powerful impulse. The only engines that have acceptable performance, are the rocket engines that use super cooled propellants like liquid oxygen and Hydrogen. Such engines are called cryogenic engines.

For India's GSLV programme, cryogenic engine proved to be the biggest obstacle. In the year 1991, India signed an agreement with erstwhile Soviet Union to provide three cryogenic engines and subsequent transfer of technology to India. Unfortunately for India, Soviet Union collapsed in the same year. Later after the disintegration of USSR, Russia went back on the pact in 1993 and, under pressure from US, refused to part with the technology. But it agreed to provide four more fully made cryogenic engines, taking the number of such engines in India's kitty to seven.

India was thus faced with the challenge of development of an indigenous cryogenic engine. Mr. Nambi Narayanan headed ISRO's cryogenic project. They started well and managed to get crucial components of the engine from Russia without drawing US attention and airlifting them by Russia's Ural airlines, when Air India refused to bring them. Unfortunately in a strange turn of fate or because of some Machiavellian intrigues by some unknown entities, Narayanan became involved in an espionage case and this gave a major set back to the project. Narayanan says that because of this false accusation, the project, which otherwise would have a cryogenic engine ready in 2001 was set back by 10 years. 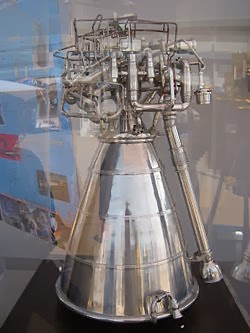 The ISRO thought that the engine was finally ready in 2010. Unfortunately it was not so. A GSLV launch on April 15, 2010, proved it, as the cryogenic engine failed 800 milliseconds after ignition. Later ISRO decided to use one of the last two Russian engines, but again the mission turned out to be failure. ISRO made another effort to launch GSLV with an indigenous cryogenic engine on 18th August 2013, but had to abort it after a leak was detected in a liquid fuel tank. ISRO's GSLV project remained truly jinxed. 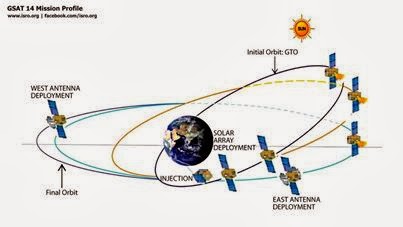 A complete end to end failure analysis was ordered and everything that was felt should be corrected was done so. The lift off on Sunday was perfect and placed the 1980 Kg satellite in a precise transfer orbit with perigee (nearest point in orbit from earth) of 179 Km above earth. (The satellite was placed in an elliptical orbit. with the apogee or farthest point in orbit from earth of approx. 36000 Km. The on board engines would be fired 3 times later to correct the elliptical orbit to to a circular geostationary orbit around the earth.) M.C. Dathan, Director, Liquid Propulsion Systems Centre, ISRO, says: “fantastic, miraculous performance from the cryo stage. The engine’s chamber pressure, the turbo pump’s speed, temperature and other parameters were exactly as predicted. The engine burnt for 12 minutes, producing the exact thrust needed to get the correct velocity and put the communication satellite into orbit.”

They did it at last! but did it no doubt damn well!