Can Indians go on Kailash pilgrimage this year? 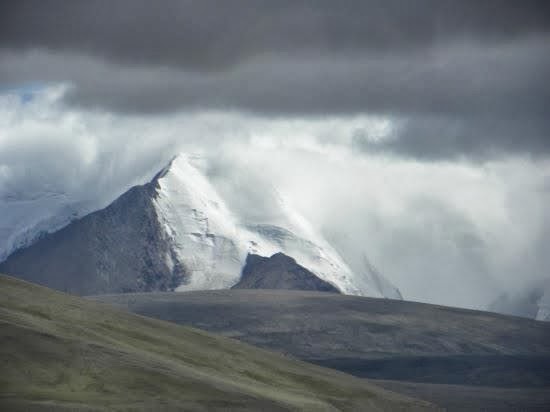 The great floods of last year, in the Indian state of Uttarakhand, that caused havoc and unprecedented loss to life and property, have a new delayed aftereffect. Readers might recollect that Uttrakhand was devastated by floods and landslides in India's worst natural disaster since the 2004 tsunami, which had battered the east coast and Andaman-Nicobar islands. The Utarakhand floods, caused by a multi-day cloudburst on few fateful days in June 2013, had also caused floods in neighbouring areas like parts of Himachal Pradesh, Haryana, Delhi and Uttar Pradesh in India, along with some regions of Western Nepal, and some parts of Western Tibet, which experienced unusual and very heavy rainfall. Wikipedia estimates suggest that more than 5,700 people were "presumed dead." including 934 local residents in Uttrakhand floods. 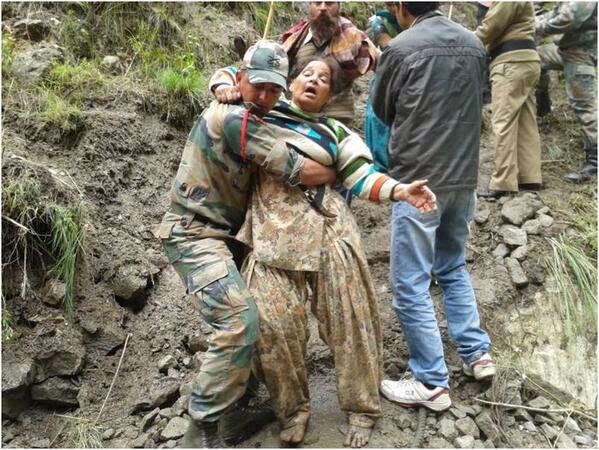 In an earlier blogpost, “A look at Himalayan disaster relief operations through Indian Army Tweets ” I had outlined three river valleys, which were devastated by the floods. It so happens that Uttarakhand's important tourist trails to important religious places, go through these river valleys only. These routes are: Rishikesh-Uttarkashi-Harsil-Gangotri; Rudraprayag-Kedarnath - Joshimath-Badrinath and easterly route of Dharchula-Tawaghat in Pithoragarh district, neighbouring Nepal. It is this last route along Nepal border, where huge damages caused by the floods of last year are now becoming big obstacles for the pilgrims wanting to go on the most revered and sacred pilgrimage for the Hindus in coming summer months. 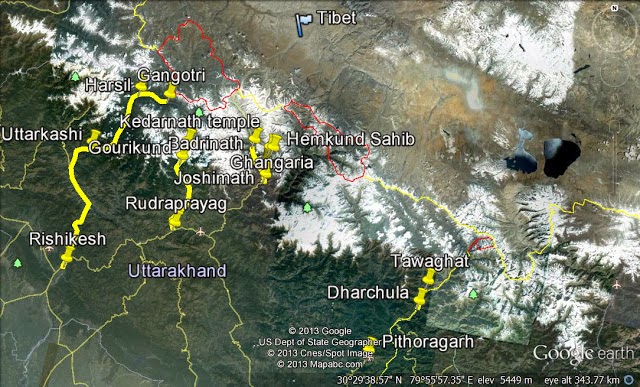 The mountain peak of Kailash and the large reservoir of water, at the foot of the mountain, known as 'Mansarovar,' are perhaps the most sacred places for Hindus to go on a pilgrimage. Both these places are located in western Tibet and are also equally sacred for Tibetans, who follow Buddhist religion. Travelling to Kailash from India in the normal course itself, can be considered as one of the most arduous and strenuous journey, even for a fittest person. Because of this, Indian Government has made it mandatory for the pilgrims to undergo strict medical check up before they are allowed to go. 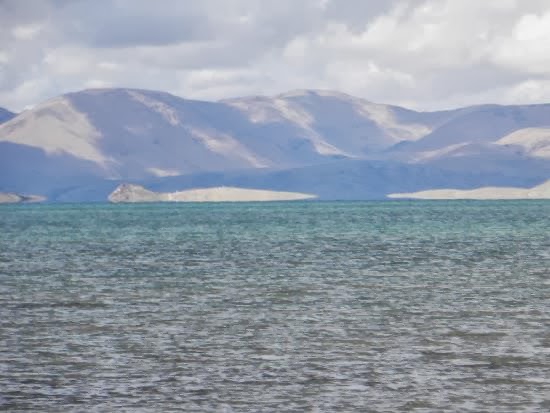 However, there is an easier way to Kailash, via Nepal, where a bus can take you all the way. But this travel is an expensive proposition and not many pilgrims are willing to take this up, except for few affluent ones. Most off the pilgrims still prefer to take the direct India-Tibet land route. The initial part of this journey
can be done by a vehicle on a motorable road which goes through the towns, Almora, Dania, Pithoragarh, Dharchula, Tawaghat and Narayan Ashram. From here the trek begins with pilgrims walking along the 'Kali' river up to Kalapani. A tough trek of 9 Km to Navidhang and then a further trek of 8 Km takes the pilgrims to the Lipulekh pass (5334m) located on the international border and crossing it takes the pilgrims to Tibet. Here the Tibetan/Chinese authorities welcome them. They walk down to Chang Lobochahela and from here by truck and bus they reach the old trading town of Taklakot (Purang), which is situated on the banks of the Karnali river. Onwards journey to Kailash can be done by a bus. 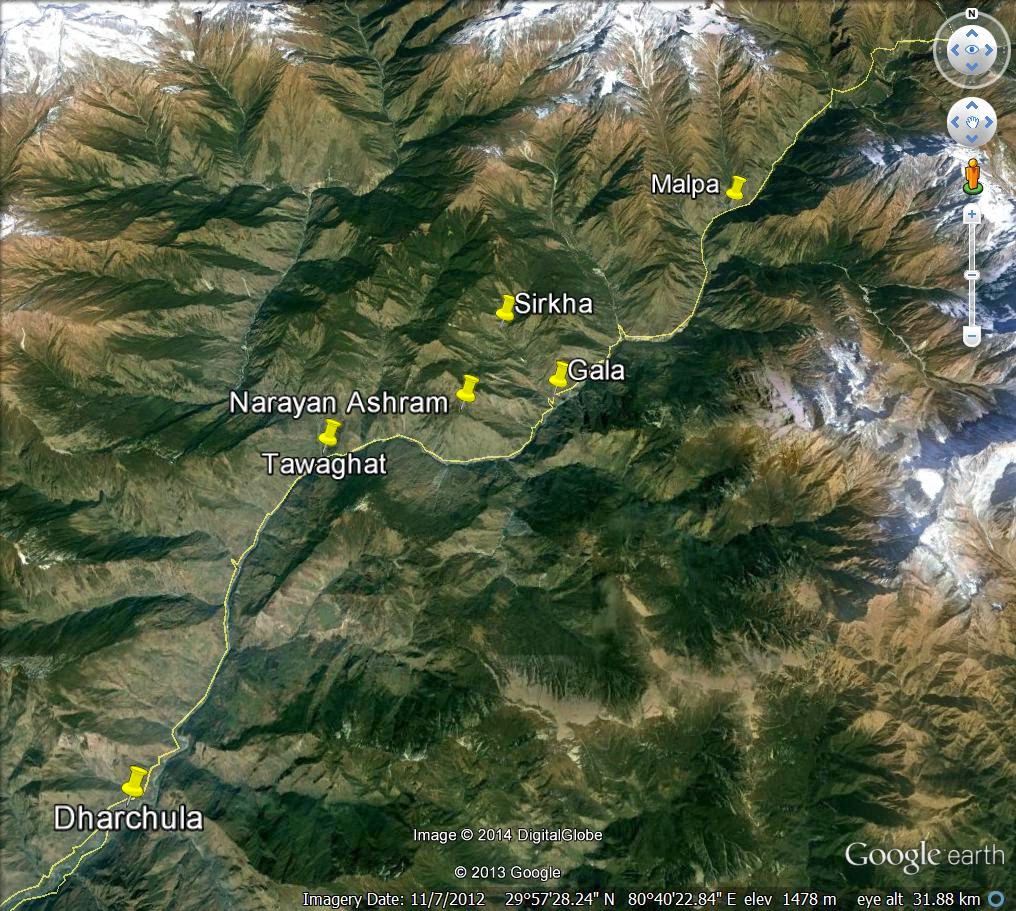 Last year's flash floods washed away a 60-meter-long road bridge at Kanchyoti village between Dharchula and Narayan Ashram and large portions of road in the nearby Tawaghat area; portions of the initial part of the pilgrimage route. The Border Roads Organisation (BRO) and PWD are handling the repair and construction work in the area along with the Indo-Tibetan Border Police. The plan is to build a 124-meter-long road bridge in place of the one washed away. However, considering the pace at which this work is progressing, it is doubtful whether the road would be ready before the due date when pilgrimage starts on 8th June 2014.

The alternative routes being explored just in case the presently damaged roads are not ready before due date. One alternative route is from Tawaghat to Sirkha and Gala, the first and second Indian base camps of the pilgrimage. However part of this route from Tawaghat to Gala runs along the Kali river and is believed to be prone to landslides. Also alternative route between Tawaghat and Sirkha is a 19-km-long, steep trek. The authorities consider it as risky and unsafe for pilgrims. However, pilgrims may be forced to use these alternatives if the state government fails to clear the main route on time. 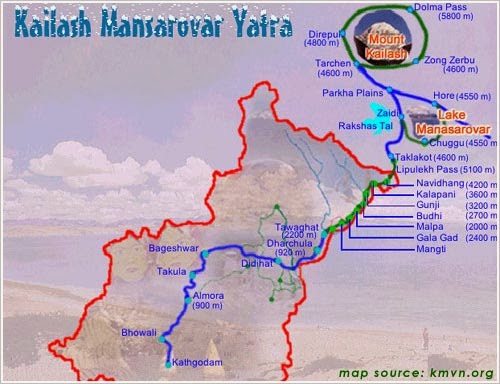 In short, for the people, who may be interested in going on this pilgrimage this year, the picture hardly could be called encouraging. A friend of mine, who had been on this pilgrimage few years ago, had told me sometime back that the enthusiasm and determination of the participants going on the pilgrimage is unimaginably high and their devotion towards Kailash so profound that no hardship or difficulty on the way deters them even to the slightest extent. With that kind of determination, it would be no wonder if the Kailash pilgrimage starts and continues, it would turn out to be great success even this year, in spite of all the hardships and difficulties.