The fakes and the real thing 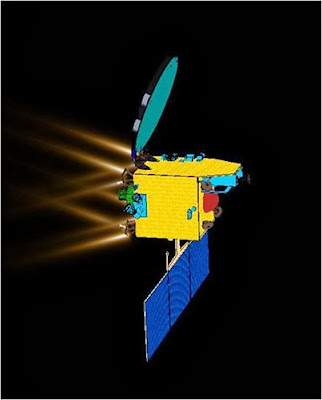 India's Indian Space research organisation (ISRO) launched a mission to planet Mars on 5th November2013 known as 'Mars Orbiter Mission' (MOM). As far as the launch was concerned, there was nothing unusual, as ISRO's workhorse PSLV rocket was used for launching, which had previously completed 24 launches. The MOM mission was it's 25th launch.

What was unusual in this launch was the PR effort undertaken by this Government owned organization by opening a facebook page (https://www.facebook.com/isromom) on October 22nd, 2013, dedicated to this mission. It was perhaps the best part of the effort, as behaviour of the spacecraft moving at breakneck speed above in the vast wilderness of space was actually reported to all interested Indians accurately and timely by this page. The effort was well awarded immediately as number of likes soon crossed 250, 000, a feat not easy to achieve. 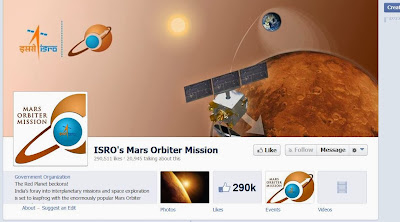 The most important gain that was achieved by this web page was the tremendous awareness and interest it created amongst India's net savvy youth. There was some criticism about cost of the mission in some media. A school boy however sent a note to ISRO web page describing how much inspired he was? Because of the ISRO moon mission and this prompted a feedback from one of the netizens saying that if this mission can inspire 100 such young Indians, that gain itself would offset the mission expenditure. How true, isn't it?

As the Mars bound spacecraft successfully completed space maneuvers one after another, the ISRO web page became even more popular. But as it happens with every success, number of scrupulous web sites and web pages appeared piggyback riding on ISRO's success. The ISRO was naturally frustrated and have now published a formal notice to these unscrupulous operators and I quote:

It is observed that a number of pages in the social media (Facebook and Twitter) are floated in the name of ISRO / Department of Space/ Mangalyaan, etc., which have no authenticity and ISRO does not take any responsibility for any content hosted on these pages. Some of these FORGED pages are:

Such impersonation of the organisation is construed to be a serious offence and stern legal actions against these pages/administrators of these pages are being initiated from ISRO/Department of Space to bring them to immediate closure.”


These fake facebook and twitter pages appear to have done better than ISRO's original page itself. Ironically, the FB page Isro.org has got 370000 likes, almost 80,000 more than Isro's original Mars mission page. The two fake Isro accounts on Twitter have close to 5,000 followers. These pages and updates have been giving information on the mission, media reports on ISRO and discussions, photographs and satellite pictures. The FB pages have also used the ISRO logo without authorisation. Some of them have become friends of US space agency NASA to look original. ISRO chairman commenting on these spurious web pages says: "I don't say they are giving false information, but we want to put an end to these fakes." 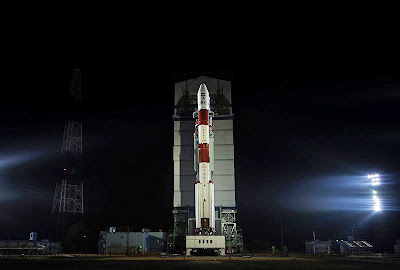 It is unlikely that these web sites would just give up because of ISRO's notice. That might be just the first legal step. Since filing a legal suit against owners of these web pages is also not feasible as in the first place ISRO does not even know, who are all violating or infringing on their intellectual property right, and secondly they may not be based in India at all. What legal experts say is that a legal suit needs to be filed in a jurisdictional high court against all well known service providers and unknown respondents also under a common identity, which includes any or all of the words like ISRO, MOM, Mangalyan etc.etc.

We do have a case here, which illustrates how easy it is to take advantage of any success on internet and violate or infringe on somebody else's intellectual property rights. No doubt it is a major shortcoming for the internet and needs more stringent controls on such acts.