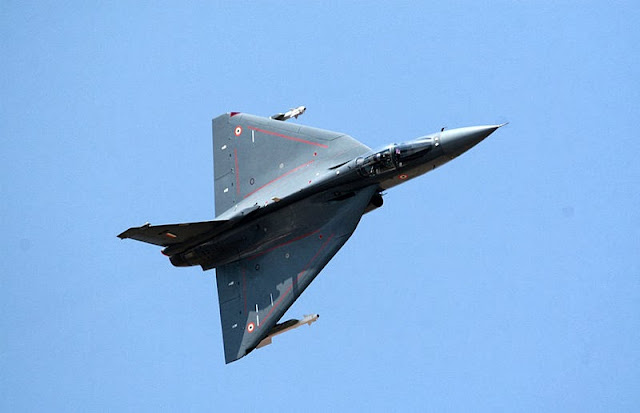 Sometime in 1983, Government in India, launched a project known as LCA to develop indigenously a light combat aircraft that would replace the ageing MIG 21 fighters. The budget sanctioned was a modest one, just 5.6 Billion Rupees. The project however kept on meeting one hurdle after another and effectively kept on being delayed.

Meanwhile Government of India led by Atal Bihari Vajpayee gave green light to carry out underground nuclear tests between 11th and 13th May 1998, 6 nuclear explosions of fusion and fission bombs were carried out at 'Pokharan' in Rajasthan state of India. This immediately brought in international sanctions on all defence related work being done in India. The LCA project was severely affected as many sub systems of the aircraft were planned to be imported. 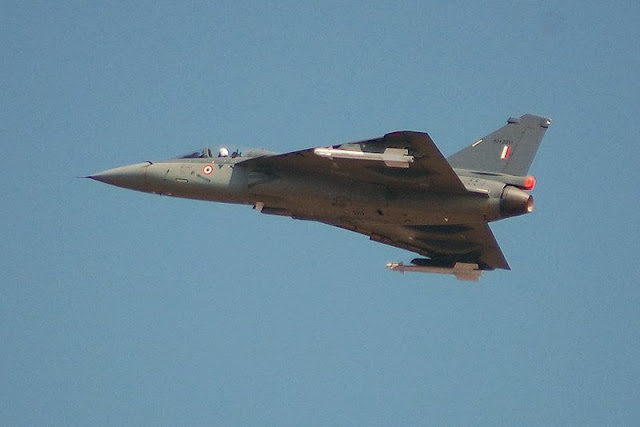 In in April 2003, PM Atal Bihari Vajpayee named the LCA as "Tejas." The maiden flight of Tejas was made from National Flight Test Centre (NFTC), near Bangalore, on 4 January 2001, and its first successful supersonic flight followed on 1 August 2003. In March 2005, the Indian Air Force placed an order for 20 aircraft, with a similar purchase of another 20 aircraft to follow. All 40 are to be equipped with the F404 engine manufactured by US engine manufacture General Electric, as 'Kaveri' indigenously developed engine for Tejas failed to meet required standards.

After this long, tortuous journey, Tejas has zoomed past the initial operational clearance (IOC)- II mark, when India's defence minister AK Antony handed over release to service document (RTS) to Indian Air Force chief NAK Browne, on 20th December 2013, after having clocked almost 2,420 flight tests since its final prototype first flew in January 2011. What is the real significance of this actual 'initial operational clearance ( IOC )-II configuration?' It signifies that the fighter is fully airworthy in different conditions, from extremely low temperatures of high-altitude areas to the searing heat of deserts. It also means that the ultimate user of the aircraft has accepted the aircraft design and it no longer thinks that the fighter is being prematurely thrust down its throat. After this clearance, the fighter will be cleared to be flown by regular pilots of the Indian Air Force and inducted into squadron service. The first squadron of 18 to 20 fighters will be based at Sulur Air Force Base in the state of Tamil Nadu state of India. 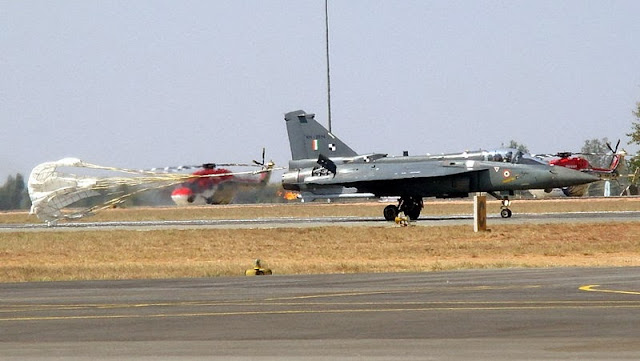 However, this IOC, does not mean that the aircraft is ready to join the air force yet. Firstly, the weapons carried on board by the present version consists of only close-range R-73 air-to-air missiles and air-to-ground laser and unguided bombs. Air Force wants to have 23mm guns, rockets and BVR (beyond visual range) missiles on the aircraft and capability to undergo air-to-air refuelling. A fter integration of all these weapons and other systems is done to satisfaction the air craft would have to get the final operational clearance (FOC). Only then it can join the Air Force. This is likely to happen only in 2015.

The cost of development has also risen in astronomical proportions to 17.269 Billion Rupees, including the cost of failed Kaveri aero engine. However considering the overall importance of the project, the cost really has no meaning. Because the Tejas is certainly critical for the Indian Air Force to meet its lightweight fighter requirements. IAF chief, while acknowledging this fact says: “The Tejas squadrons are very critical for us to maintain our deterrence capability. Otherwise, our force levels will go down rapidly."

For Indian Air Force, Tejas no doubt is a good beginning. India needs to have its own indigenous fighters as foreign imports can be choked in times of emergencies. It is true that for next few decades India would have to depend on Russian Sukhoi-30MKI heavyweight fighters and proposed purchase of medium capacity 126 Rafale fighters.