Drone has delivered the sugar, Dear! 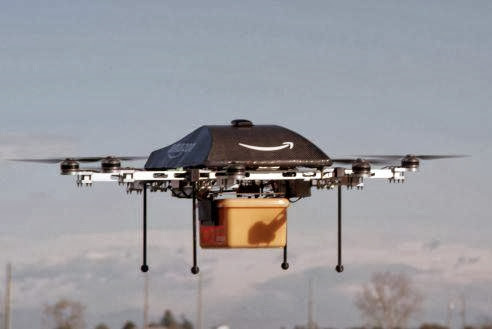 Imagine that you have invited few of your friends along with their spouses for a little get together in the evening. At 5 PM your wife suddenly tells you that she has run out of sugar or something else. This means that you need to get dressed up, take the car out of the garage and head for the nearest super market for a Kilogram of Sugar. Pick up sugar, stand in the line next to a cashier and finally return home after spending at least an hour, depending how far away you stay from the super market. While going through this unavoidable exercise, I am sure that many of us might daydream or imagine, how great would it be to have an angel appear in the sky above and deliver that Kilogram of sugar to us, while we are leisurely standing in our yard or on the house terrace, sipping beer from a can.

Rest assured that your imaginary daydream has just now come into the realm of possibility, but with a small correction, if Jeff Bezos, founder of Amazon Corp. in USA , has his way. He wants to use drones instead of Angels from our daydreams.

Drones have now become a dread or particularly ill famous, for the terror minded individuals from certain countries like Pakistan, Yemen and Somalia, because they appear suddenly in the sky and unleash deadly Hellfire missile attacks , bringing about complete destruction. For the Americans, it is a wonderful way off totally destroying their enemy with no possibility of any loss on their side. This fact was empatheticaly proved last month when a drone killed the Pakistani Taliban chief Hakimullah Mehsud, who was sitting in his SUV parked opposite his own residential compound gate. 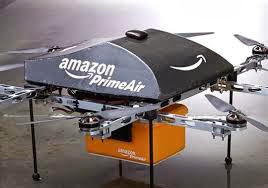 American news channel CBS recently broadcast a prime time interview of Amazon founder Jeff Bezos, who recently acquired the newspaper 'Washington Post' for a song. During this interview Mr. Bezos came up with an unexpected announcement that his company was working on getting products to customers in 30 minutes or less using unmanned aerial vehicles (UAVs).

Wow! If Mr. Bezos's dream comes true, how would the scenario, I described above change? Suppose again, that your wife tells you about running out of sugar at 5 PM, just few hours before the party. All you need to do is to punch your order to Amazon on your smart phone, go to yard with that can of beer and relax. Within 30 minutes, a drone holding a yellow coloured plastic box underneath, would appear in the sky and straight way head for you. It would land on your lawn or the terrace as the case may be. It would just release the yellow plastic box on the floor and buzz off to complete the next order. You just pick up the box and give it to your wife. Bingo! As simple as that. All you need to do is to give a shout to your wire: “Drone has delivered the sugar, Dear!” 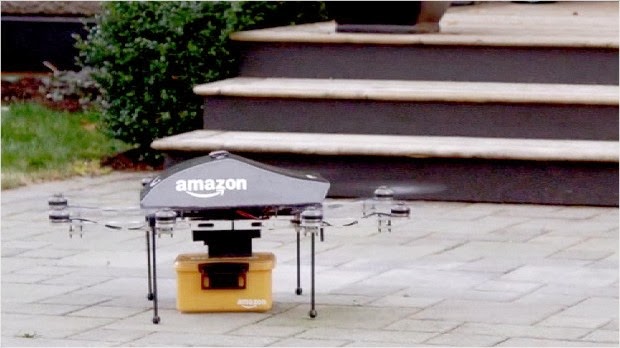 Mr. Bezos, who prefers to call his drones as “Octocopters” says that they would pick up customers’ boxed orders from a “fulfilment centre” of Amazon and then use GPS coordinates to carry it to the customer’s address and drop it in the front yard of the house. No doubt that this “Prime Air” drone project is still in the research and development phase and it may take years to advance the needed technology and needed federal Aviation Administration rules and regulations to be created. The present Octocopters the company is working on currently, are capable of carrying packages weighing up to 10 kg, and according to Mr. Bezos, this accounts for about 86 per cent of the items Amazon delivers. The company is testing Octocopters with a range of about 10 miles and they could cover a significant portion of the population in urban areas in USA.
Though Mr. Bezos's idea is quite revolutionary and sounds like wonderful music to the ears of the consumer, there appear to be many a logistical and legal difficulties before any such concept comes in practice. How the drone would find a package’s intended recipient after flying to a particular GPS address, How the transfer of the package would be effected? Or How theft or other disruptions, including the possibility that the drone may be shot down, would be avoided.

Use of drones of such large-scale commercial purposes is currently not possible under U.S. Law. The regulator in this field, the Federal Aviation Administration is working for a solution according to some reports. If these rules materialise, commercial drones might become legally viable and workable.

Amazon's new concept may or may not materialise, but it's stock rose by 1% last week in pre-market trading after thanksgiving weekend.