A matter of propriety 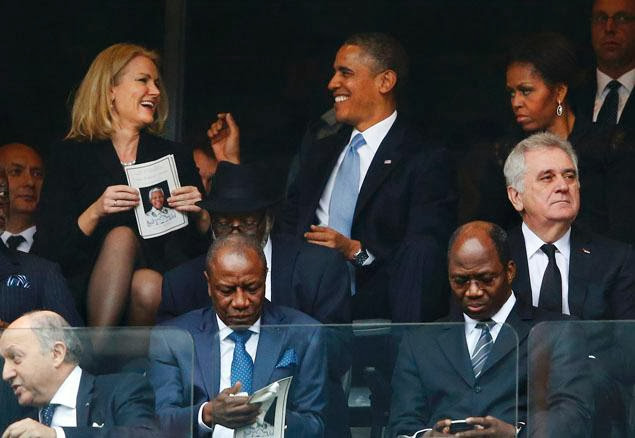 In India, the most common method of disposal of a dead human body is by its cremation. I am not really aware, when this practice started, but today Hindus widely follow this method of disposal. In every town and village in India, there is a place, mostly on the bank of a river, reserved for cremation. Mostly this is done by a wooden funeral pyre constructed with wooden logs. The dead body is kept on it and lit. In major cities or towns however, electric or diesel operated furnaces have become very common these days, due to general scarcity of wood.

It is a usual practice in India that friends, acquaintances and relatives usually gather at these funeral places to bid good bye to the departed soul. If the departed person is a social bigwig or someone very important, usually a condolence meeting also is held at funeral place, where speeches would be made by people. Since this is a grievous sombre occasion, most of the people gathered at these funeral places maintain decorum and see that sort of dignity of the occasion is maintained. People generally do not talk lightheartedly and are mostly serious. This is done so as to sympathise with the grieved near and dear ones of the departed person.

I have had witnessed many such occasions, as most of the senior members of my family as well as many friends and acquaintances are no more and I have bade them final good bye. During all these occasions, I have come across some individuals, who behave in a rather strange fashion, unmindful of the feelings and sentiments of the grieved family. They would talk loudly, even laugh and in general treat the whole experience with a lighthearted manner, even when their behaviour is considered as highly improper by others.

I am very much reminded of these people, after having read about an incident that happened at the site of memorial service in memory of Late Nelson Mandela in South Africa and the persons involved in this improper demeanor were no less that the President of US and Prime Ministers of Great Britain and Denmark. International media immediately called it as 'Selfie-gate,' and social media erupted in condemnation.

At the Mandela memorial service in South Africa, US President Obama and British Prime Minister Cameron were found sitting on either side of Ms. Helle Thorning-Schmidt, Prime Minister of Denmark in the stands at the FNB stadium in Johannesburg. The US president's wife, Michelle Obama, was sitting next to Obama. Ms. Thorning-Schmidt is married to Briton Stephen Kinnock, son of the former Labour leader Neil Kinnock and is called as “Gucci Helle," by many Danes for her sense of style. She seems to have everything like Beauty, brains, family, power and appears to be enjoying it at the same time. Press Photographers were seen clicking the pictures of the trio. 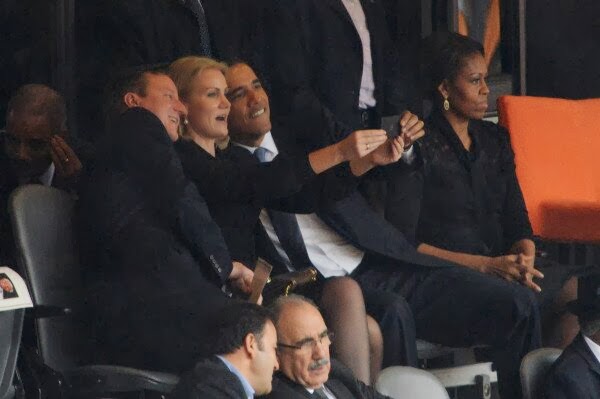 All hell broke loose, when Photos surfaced in social media showing grinning Pressident Obama with Gucci Helle and a stone faced US president's wife, Michelle Obama. The next photograph showed the Danish Prime Minister Helle Thorning-Schmidt snapping a selfie of herself, nestled in between UK Prime Minister David Cameron and U.S. President Barack Obama. As the President laughed away with the Danish leader, at least one photograph showed the First Lady flash a disapproving glare in their direction.

The Danish leader's selfie picture went viral on Twitter, with scores of comments on the total lack of propriety shown by the three leaders. The Times wrote that Obama tested the limits of "funeral etiquette" (despite the memorial not being a funeral) with the self-portrait. New York counterpart Post headlined as "Flirting with Dane-ger." The Sun called it "No Selfie Respect." Reactions on Twitter were harsher with one Tweeter writing: "What selfish morons take a 'selfie' at a memorial service? Oh yeah that's right, Barack Obama and David Cameron."

The photographer, who clicked the photographs, gave a clarification later saying: "For me, the behaviour of these leaders in snapping a selfie seems perfectly natural. I see nothing to complain about.” However the damage was already done.

Many South Africans sad from the bottom of their heart with loss of their greatest leader, are not going to be bemused with this incidence. A sombre occasion like a memorial service requires a proper response, in particular, when the persons are such high dignitaries. The US president, whose approval ratings are declining rapidly mainly on account of the healthcare fiasco, is going to see a further fall for sure.