The world of LEGO figurines

In the year 1975, when I returned back home from my first ever tour of Europe, I knew that my son, then just 6 years old, would be eagerly awaiting my arrival for his first ever foreign gift of chocolates and toys. I had already purchased from the prestigious Harrods store in London, a grand gift for him, which fitted my meager budget and crippling import restrictions, India had in those days. After I reached home, I had opened my bags and had seen my son's face lit up as I handed over the gifts to him.

After so many years, I still see the same scene repeated again, whenever my son, now a businessman, returns home from one of his frequent trips abroad and hands over gifts to his 9 year old son. Though, so many years have passed in between and there are no more import restrictions, there is something that is surprisingly the same. It is the gift that has remained the same through all these years. By now, many of the readers might have correctly guessed the gift. It surely is a brand new LEGO set.

LEGO remains even today, one of the top favourites of children from all over the world. LEGO's flagship product still remains its famous 8 legged interlocking plastic brick. These LEGO bricks can be assembled and connected in many ways, to construct such objects as vehicles, buildings, and even working robots. Anything constructed can then be taken apart again, and the pieces used to make other objects. The child's imagination is the limit here, nothing else. As of 2013, around 560 billion Lego parts had been produced. 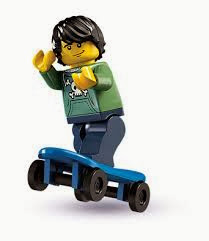 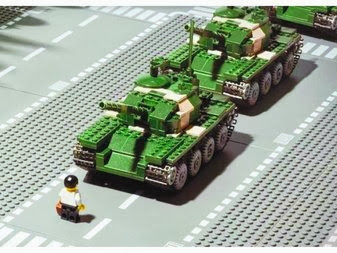 Considering the immense international popularity of LEGO figurines, it was no wonder that they appeared in advertisements. But now they are also being used to deliver a powerful political message to the viewers very effectively. A photo of a LEGO man stopping a line a LEGO tanks was published by China’s Netease Web site as a part of a slide show to mark Children’s Day on June 1. 2013. It was perhaps the most powerful pictorial commentary that commemorated the anniversary of Tiananmen Square Massacre crackdown in Beijing of June 3–4, 1989, when troops with assault rifles and tanks inflicted thousands of casualties on unarmed civilians trying to block the military’s advance on Tiananmen Square in the heart of Beijing, which student demonstrators had occupied for seven weeks. This week, LEGO figurines have appeared on the walls in Malaysia delivering a powerful message. The original mural first appeared on a wall in the southern Malaysian city of Johor Baru, just across a narrow strip of sea from Singapore. The mural depicted a woman drawn in the style of a LEGO figurine walking towards a street corner, where a black-clad, knife-wielding LEGO figurine robber waited to pounce. The mural, by 27 year Lithuanian artist Ernest Zacharevic, who lives in Penang, was intended as a commentary on the city’s reputation for crime. The very fact, that only last year, a Legoland theme park has opened not very far from this city and many tourists from Singapore and other places are visiting Johor Baru, to visit the amusement park, makes the use of LEGO figurines in this mural much more significant.

Angry city officials quickly painted white paint over the figurines, but the image has struck a chord in the minds of the people concerned over crime. Within next few days, the images of the street mural have gone viral on the net. Across Malaysia, many versions of the mural have popped up. Copies of the mural by other artists as well as paper cut-outs featuring the figurines have appeared at sites in Johor Baru, the capital Kuala Lumpur and elsewhere. Social media web sites are filling with photos of the copies.

A new Facebook page has appeared in Chinese ( Malaysia has a large Chinese minority) that is dedicated to the phenomenon and has drawn more than 16,000 “likes.” Advertisements for sale of Tee shirts with the figures of figurines printed on them have appeared on Facebook with 20 ringgit ($6) apiece, as the price. One posting in Chinese declared Zacharevic “Malaysia’s Banksy,” after the British street art superstar.

Malaysians have been expressing increasing alarm over a perceived rise in crime in recent years, with gang wars being played in the cities. Effective use of LEGO figurines just proves how efficacious they can be.

Those of my readers, who are from India, can easily remember how effective the advertisements from the Milk products co-operative 'Amul' are, which always show a neatly turned out small chubby girl along with other characters and a catch line that relates to any news worthy event. The LEGO figurines are proving to be efficacious in a similar fashion. It is clear that the international media have found a new powerful tool to address concerns of the people; The world of LEGO figurines.