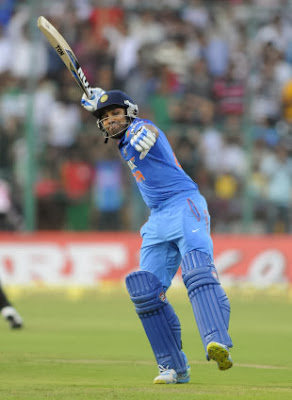 I am not exactly an ardent fan of India's most popular game of cricket, though I do like to watch an occasional game at my convenience. Ever since, it was invented, cricket has been called a game of glorious uncertainties because it always offered an equal chance to both sides, one that bowled and the one that batted. The fortunes for the teams varied along with the state of the pitch or the ground on which the game is played as well as weather conditions. If the pitch, which sometimes also called as wicket, cracked, it favoured certain types of bowling. Similaraly cold windy conditions or hot humid weather assisted certain type of bowling. All that was required was a intelligent captain, who would take advantage of the conditions.

Things started changing, when a game of cricket that went on and on for five long and boring days in sun, was first changed to a format where a fix number of balls would be bowled by either teams and the match would be over in a day. Then came the T 20 or even shorter version, that would be over within 3 or 4 hours only. With the abbreviated versions of the game, came new rules and regulations.

Earlier, cricket experts would say that the 5 day format games, known as test matches, were won by bowlers, as they would bowl according to the conditions of pitch and weather. There were really no conditions imposed on them by the rules of the game. The new format one-dayers are won by batsmen as it is believed that spectators came to watch boundaries ( Hitting the ball to limits of the playground) being hit rather than the ball beating the bat. To make the game one sided in favour of the batsmen, many rules and regulations loaded against the bowler were introduced. The first set of rules stipulated that a bowler could bowl only one high rising ball known as bouncer in a set of six balls also known as 'over' in cricket terminology. A bowler could no longer bowl to the leg side of a right handed batsman and vice versa and such ball bowled now became a wide ball. The new one day game rules - two new balls per innings, and a maximum of four fielders outside the circle have been introduced recently. All this is making easy for the batsman to hit tall scores comparatively easily.

In the earl years of one day games, 250 runs from 50 overs was considered a good score and a potentially match winning one. If a team was expected to score more than six runs per over, it was assumed the game had gone out of reach for the team batting second. With the new rules, a score of 300 has become a commonplace achievement. Consider the 5 one day matches, played recently between India and Australia. The runs scored by the side that batted first were, 304, 359, 303, 350, 383. It is easy to argue that the such tall scores were scored because two sets of bowlers from two sides have been depressingly mediocre and both sides had talented great batsmen.

There could be some truth in this no doubt, but this could not be the only reason. It is obvious that the new rules loaded against the bowlers also have contributed to these scores. It is therefore no wonder that India's captain says that in the new format bowlers have come completely irrelevant and we may as well get bowling machines instead of bowlers.

Cricket in its new format is no longer a game between a bat and a ball, it has become a game between two sides, where the side that can hit a ball farthest, usually wins. Batsmen get out now, because of their mistakes. They no longer are trapped by the opposite side by intelligent bowling and fielding.

Cricket still has its glorious uncertainties, but run making is no longer one of them.