Quest for a better mosquito repellent 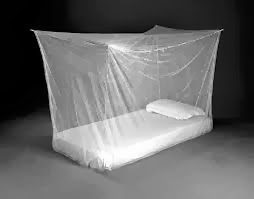 For every tropical and sub tropical country of the world, mosquito menace perhaps is the major health hazard. India is no exception. As far as I remember, my home town, Pune, always had armies of mosquitoes on rampage, almost every night except may be few nights of the summer, when temperatures really soared. I remember in my child hood, we used to sleep inside mosquito- nets hung over our beds. The operation of getting inside our beds was in no way a simple thing. These mosquito nets used to have a slit on one of the sides and the sleeper had to dart in quickly through this slit or a few reconnoitering mosquito patrols were likely to sneak in and would later have feast of sleeper's blood throughout the night. There was also a practice of burning 'Dhoop' incense in the evenings, however the invading armies of mosquitoes would not be much disturbed in their mission, by such trivial measures taken up by their hopeless targets or humans.

Some of my neighbours had put fine wire mesh grills on each and every window of the house making the entire house a giant mosquito net. This was really effective and I liked the arrangement. However my parents never liked it as they felt that the fine mesh grills block the breeze in the night. The mosquito nets, which we used had another problem. They were very effective dust catchers too and within few nights of use, collected enough house dust so that sleeping in one of them was an open invitation for allergies. We had no choice but to use mosquito-nets as nothing else would really work. 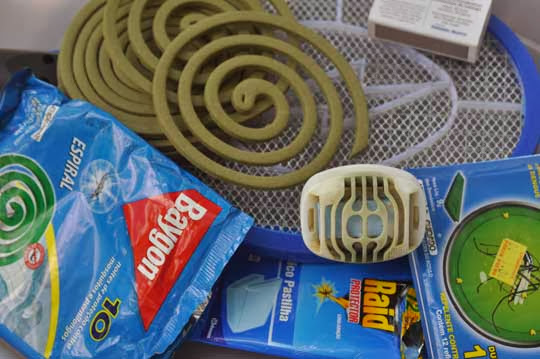 Then sometimes in 1970 came the mosquito coils, which are really a mosquito-repelling incense, usually shaped into a spiral, and typically made from a dried paste of pyrethrum powder. The coil is usually held at the center of the spiral, suspending it in the air, or wedged by two pieces of fireproof nettings to allow continuous smoldering. Burning usually begins at the outer end of the spiral and progresses slowly toward the centre of the spiral, producing a mosquito-repellent smoke. The smoke if inhaled occasionally was tolerable but on daily basis used to be purely bad for the throat.

During WWII United States army developed a wonder mosquito repellent chemical popularly known as DEET or N,N-Diethyl-meta-toluamide. It is a slightly yellow oil and the most common active ingredient in insect repellents. Heater type mosquito repellents, which vaporize the DEET in air, first appeared in the market in 1970's in India and are perhaps the most effective method to get rid of mosquitoes. 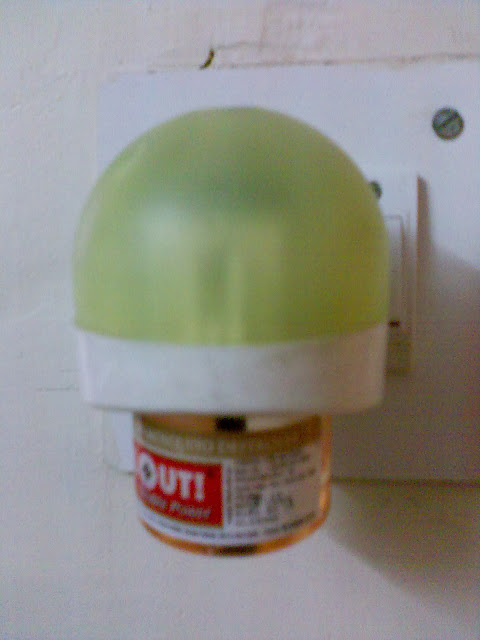 Even though DEET is being used for last so many years as mosquito repellent, scientists were not able to find how or why mosquitoes smell this chemical and what causes them to turn away in disgust. A US scientist of Indian origins, Dr. Anandasankar Ray and his team at the University of California at Riverside in the U.S. have been able to identify for the first time, the molecule on an insect’s smell-sensing nerve cells (a common fruit fly,) that acts as a receptor for DEET, They have published recently a paper in the well known scientific publication 'Nature', which highlights their work.

To do this, Dr. Ray and his team used a recently developed technique on a common fruit fly, Drosophila melanogaster. Strains of this fly were genetically engineered so that its sensory neurons produced a green fluorescent protein when stimulated by an odour. The neurons that glowed green when exposed to DEET turned out to be in a pit-like structure in the antenna of the fly. They were able to establish that a protein known as Ir40a was the DEET receptor that activated those neurons. Dr. Ray says in this paper and I quote:

“Novel repellents that are safe and affordable can be used to limit insect-human contact in disease-endemic areas of the world and to provide an important line of defence against deadly vector-borne diseases,”

Having established how mosquito repellents really work, the next step was to look for better DEET substitutes. DEET itself has many disadvantages. Its cost is high s high cost and it dissolves plastics and synthetic fabrics. Many believe that its prolonged use could be harmful to humans. To analyze other substitutes Dr. ray and his team created a computer programme that could examine structural information about various chemicals and quickly identify those that might be most effective in stimulating the Ir40a-bearing nerve cells. The programme was used to screen close to half a million compounds, including over 3,000 naturally occurring ones.

Ten natural compounds identified by the computer programme, were tested in fruit flies. Eight of them activated Ir40a neurons and displayed good repellence. Four of those molecules were also shown to be capable of repelling female Aedes aegypti mosquitoes, which can spread the viruses that cause dengue and chikungunya. Three of those four natural compounds had already been cleared as food additives, greatly simplifying the process of getting regulatory approval for their use as insect repellents.

I have used DEET based mosquito repellents for years without any side effect. Some people say that it is a carcinogenic material. Though I have not found any supporting information as yet. I do not use it any more because, when I renovated my house, I fitted fine wire mesh grills on all windows in my house. According to me that works as the best solution to get rid of mosquito menace. However it may not be possible for everyone to have their residences modified. They can certainly use DEET, till Dr. ray comes out with a better repellent.