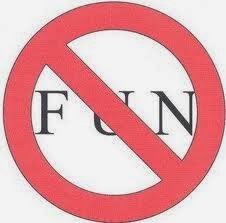 Last night, I was watching a TV discussion on India's Mars mission that was launched earlier in the day. In the panel, that was discussing the pros and cons of the mission, were two guys, who appeared dead set against the mission and were sitting there with long drawn constipated faces. Most probably, they were invited by the news channel only for their contrary views just to take a counter position on the issue being discussed. Even then, I felt a slight wave of anger inside me not because of their known positions and view but they were positioning themselves as spoilsports, when the general mood was of happiness and celebrations.

Two or three decades ago, three or four families amongst my relations, used to meet for a get together during Deepavali holidays once a year. Out of the three families, one family was a problematic one. The husband was an alcoholic. So even with firm determination that she would not let her personal problems spoil the Deepavali fun for everyone, some incident or other would happen and the wife would loose control of herself and the strife would extend to our get together. I could never understood, why the man would not control himself for just one day and spoil everything that would be planned by everyone else. Slowly the customary get togethers in Deepavali holidays themselves became such unpleasant experiences that we just gave them up. This man turned out to be real spoilsport ,who ruined the fun for all us.

There is an idiom, which says: “ If anything can go wrong, it will!” Some call it also by the name Murphy's law. Leaving aside who coined the phrase, we all observe that this happens quite frequently and certainly acts as a divine spoilsport. Some call it fate. I want to narrate a particular incidence from the past. I was then working in a big industrial conglomerate in Mumbai. Our group has designed a product for use on a specific piece of textile machinery and several such prototypes were supplied to a textile machinery manufacture. About a month later, our company's management decided to shift our office to a new location. Since that was to be the last day in our old office, we all planned a little party and made all the arrangements. After office hours, when we were free, we collected at a spot and were enjoying our party. Just then the telephone rang. It was our customer making textile machinery. He told us that they have installed our product on one of the textile mills in Mumbai and there were some problems and we should immediately go down there. In an instant, all our plans for an enjoyable evening just fizzled out and we rushed to the textile mill. When the work was over, it was well past midnight. I have often wondered since then, why that call had to come on that very day, when we were enjoying ourselves and why not on the previous or the next day? Why our customer had to be a spoilsport? Off course there is no answer to that except arguing that this was the operational part of the Murphy's law.

Some people are born spoilsports. They would take a counter view in a group against the popular view, without having any particular reason or purpose, just for the hack of it. If majority of people have liked a film, the spoilsport would say it was unethical, if all others have liked a particular restaurant, he would say the food is unhealthy and put a damper on others. If the spoilsport has some authority, he would use it and deny something to others just to spoil their fun. Being a spoilsport need not be confined to adulthood, Children also show the trait. A boy may take sadistic pleasure in putting his leg across so someone passing by may stumble and fall. I have a feeling that spoilsports find a sadistic pleasure in taking a contrary view or do some act and oppose everyone else. Seniors are usually accused of this trait and probably the accusation has some truth in it. Some people turn spoilsports because they had to go through many bitter experiences in their life. Later they become so negative minded that they start feeling that everything is bound to go wrong all the time. We all should remember that when we are in a group and do not agree with something that is being said, it is far better to keep our negative views with ourselves than acting spoilsport for everyone.