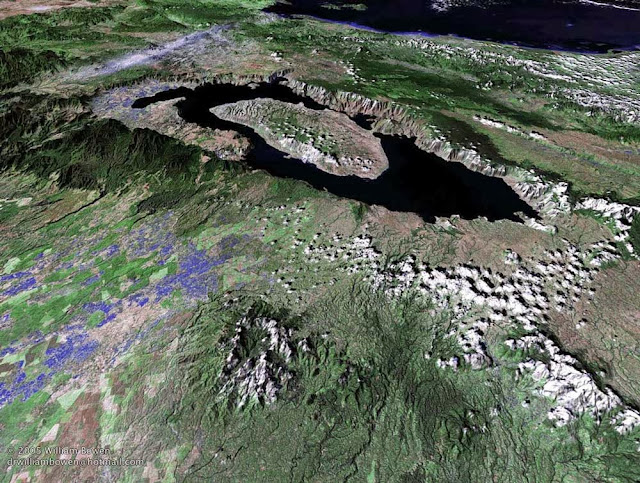 Approximately 74000 years before, there was a super volcanic eruption on the Sumatra island in Indonesia, throwing up at least 2800 cubic kilometres of volcanic material in the sky, dwarfing other historical eruptions such as Krakatoa and Pinatubo. The eruption instantly destroyed all life in its immediate area, with intensely hot flows comprised of billions of tonnes of ash and rock, accompanied by a deafening noise and powerful tsunamis. It also sent hundreds of cubic kilometers of ash and gases high into the atmosphere. The volcano then collapsed inwards to form a huge sunken caldera (now Lake Toba). The gases, including sulfur, circled the globe on air currents, while the ash spread out to the north and west fanned by prevailing winds. When the ash began to fall, it covered the Indian subcontinent and rained down into oceans from the Arabian Sea in the west to the South China Sea in the east. Toba eruption was no doubt a major event that affected the history of humans or mankind in the Indian subcontinent. 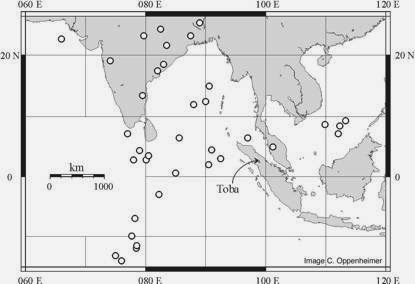 Places where ash from Toba eruption has been found

Indonesia is often called as Pacific ocean's Rim of Fire. This country, shaped like a hockey stick and consisting of more than thousand islands has scores of Volcanoes on an arch shaped line. Even though some of these are live, most of the Volcanoes fortunately are dormant or sleeping. Because of this, an eruption of an odd volcano, is not considered as a major disaster or event in this country. Even then the eruption in October 2010, after a gap of some 400 years, of the Sinabung Volcano, located near city of Medan on North Sumatra islands, is considered as a worrying event, according to the Chief Executive Mr. Surono of and Geological Disaster Mitigation for the simple reason that this volcano is located barely 30 Km from the lake Toba, the site of the super eruption some 74000 years back. 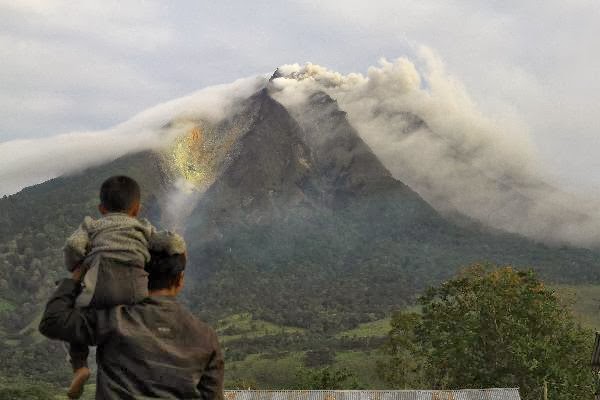 
Perhaps cautioned by the Mt.Sinabung eruption of 2010, a study was conducted by Craig A. Chesner, from the Eastern Illinois University in the US in 2011 which concluded that the current Lake Toba was the result of four previous eruptions. Out of these four eruptions the first one took place around 1.2 million years ago at the northwest end of Lake Toba, the second was around 840,000 years ago south of Lake Toba, encompassing Parapat and Porsea, the third eruption occurred around 500,000 years ago at the northern end of the lake between Silalahi and Haranggaol, and the fourth eruption occurred some 74,000 years ago which resulted in the present state of Lake Toba, with Samosir Island in the middle. Its depth is estimated at 500 meters. 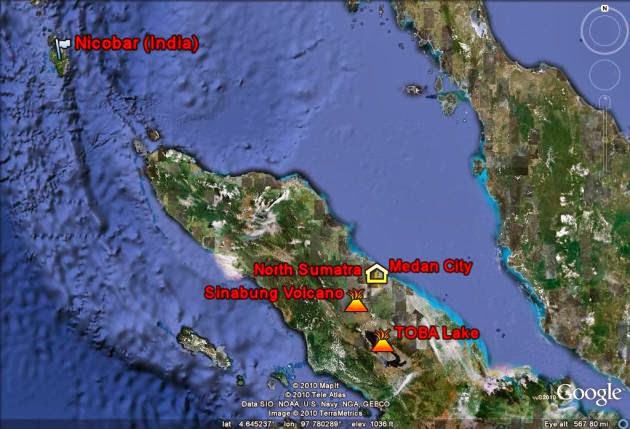 Mount Toba is regarded as a super volcano because it has a huge magma chamber, which, if it erupts again could cause massive damages like earlier eruptions. The magma chamber inside the volcano can erupt any time, if the Sumatra fault line that bisects Sumatra Island from the northwest in Aceh to the south in Lampung gets reactivated. 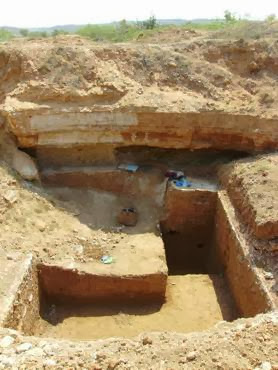 Last month (October 2013) a joint conference was held between the Indonesian Geological Experts Association and Indonesian Geophysics Experts Association in Medan city, capital of North Sumatra to discuss about Mt. Toba. Around 800 geologists and geophysicists took part in the conference, including scientists from Australia, France, Malaysia, Singapore and the United States. What is surprising is that no one from India attended this conference because either they were not invited or were simply just not interested. Several studies related to the Mount Toba eruption were presented by experts, including the one by Craig A. Chesner, which has been mentioned above.

The scientists from Indonesia Geological Experts Association also presented results of their study, in which they have found out that Mount Toba still contains a dangerous magma chamber (A magma chamber is a large underground pool of liquid rock found beneath the surface of the Earth) . The researchers, using tomography method (Tomography refers to imaging by sections or sectioning, through the use of any kind of penetrating wave) were able to observe, Mount Toba magma chamber at a depth of between 20 kilometers and 100 kilometers. The research is continuing and the scientists hope to find the potential volume of magma in the volcano for triggering an eruption. In short it can be said that Mount Toba still contains a dangerous magma chamber and its activity needs further study. 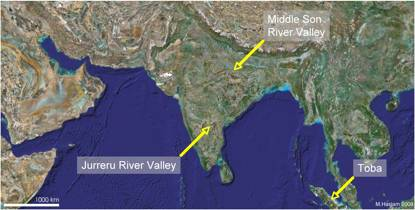 Perhaps to bring back the scientists from their academic world to reality, Mt Sinabung, located barely 30 Km away from Mount Toba, erupted spectacularly again on 23rd-24th November, forcing everyone in a 5-kilometre (3.1-mile) radius of the volcano to evacuate. It erupted six more times on 25-26th November 2013, spewing columns of ash as high as 2,000 metres (6,500 feet) and making 18,000 Indonesians flee from their homes.

Mt. Sinabung eruption brings a sense of urgency to the researchers in Indonesia, who are currently working to find out how big is the potential threat from Mount Toba. I am little surprised that no one in India seems to be aware of the potential danger to the country in case Mount Toba decides to erupt again. It is high time that Indian geologists join the geological investigations on Mount Toba. 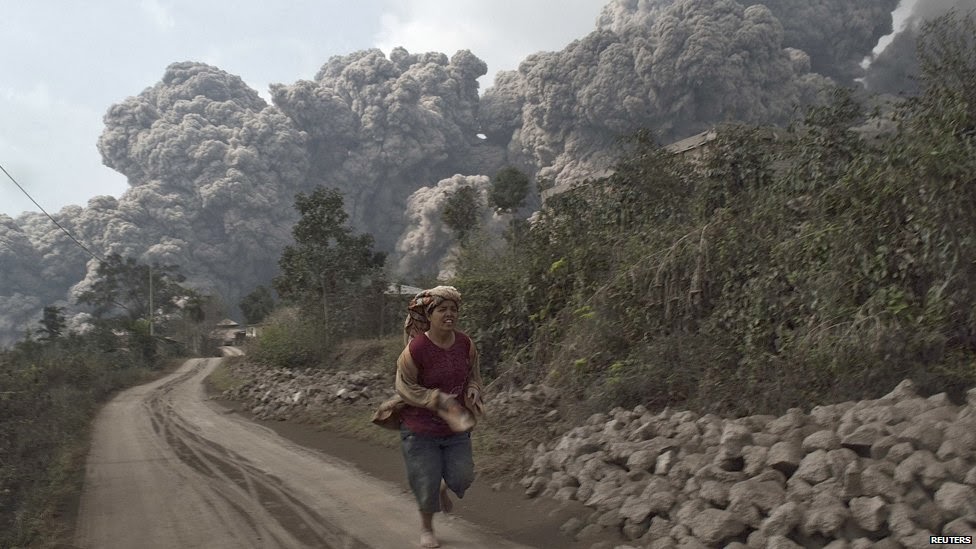 At least 14 people have been killed in a catastrophic volcanic eruption in Indonesia, just a day after authorities allowed thousands of villagers to return to their homes on its slopes.

Residents in the “danger zone” around Mount Sinabung in North Sumatra, which had been rumbling for months, had been evacuated for their safety but were told that activity was decreasing before the eruption on Saturday.