In the high charge electric atmosphere of the TV media in India, with headlines and discussions completely hogged by election news and prime time swamped with pr-election surveys, rape scandals and snooping scandals, most of otherwise significant news, just gets completely side tracked or even neglected. Latest example of this unfortunate trend is the total neglect by the media about the recent visit of Nguyen Phu Trong, general secretary of the Communist Party of Vietnam to New Delhi, when 8 important bilateral pacts were signed, which might have a long term effect, not only on relations between the two countries, but rather on India's future relationships with entire south east Asia.

India adopted it's "Look East" policy during the governments of prime ministers P.V. Narasimha Rao (1991–1996) and Atal Bihari Vajpayee (1998–2004). Under this policy, India seeks to forge close economic and commercial ties, increasing strategic and security cooperation and emphasizes f historic cultural and ideological links with the countries in south east and east Asia. India wants to create and expand regional markets for trade, investments and industrial development in this region and also looks forward to have strategic and military cooperation with nations concerned by the expansion of China's economic and strategic influence in the south China sea.

After adopting 'Look-East Policy', India has taken positive and calculated steps to develop close military relationship with Vietnam, like supply of military hardware and increasing number of slots in military training courses for Vietnamese army officers. There are number of Vietnamese requests like transfer of Brahmos missiles, submarine training, conversion training for its pilots to fly Sukhoi-30 fighter jets, modernization of a strategic port and sale of medium-sized warships. No one in public domain knows yet, to what extent these demands have been met by India. In any case, it is obvious that this relationship with Vietnam is a very strong counter strategy against Chinese arming of Pakistan. 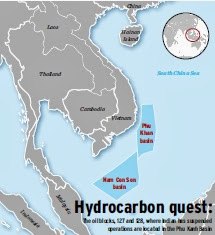 India and Vietnam signed the first gas exploration contracts way back in 1988 for two blocks (Lan Tay and Lan Do) in the Phu Kanh Basin along with contract for the lucrative Block 6.1 close to the Nam Con Son Basin in Natuna Sea near Indonesian territorial waters. Chinese never objected to Vietnam allotting the lucrative Block 6.1 to India during the Cold War years but raised an objection to India taking up exploration in blocks 127 and 128 located up north in Phu Kanh Basin, having roughly equal distance from the Vietnam coast and Hainan Island of China, where it has a large submarine base. Vietnam has always claimed that Phu Kanh Basin is in a continental shelf and falls in it's exclusive economic zone. These two oil exploration block fall in Vietnam' exclusive economic zone and were assigned to the global arm of the Indian, state-owned Oil and Natural Gas Corp; ONGC Videsh Ltd. India began production tests in block 127 in September 2009. However it st decided in 2011 to get out of block 127 as no oil showed up in the exploratory well. This was followed by a decision in 2012,after another year of exploration, by ONGC, which informed the oil ministry of it's intent to relinquish block 128, also on basis of techno-commercial (not enough oil there) considerations. Oil ministry approved the action and as per terms of contract with Vietnam, India paid a $15 million exit fee to Petro Vietnam for getting out of the block. There was speculation that India gave up the oil exploration in block 128 of south China sea under pressure from China, however absence of any commercially exploitable oil reserves appears to be the prime reason. Chinese had resorted to all kinds of tactics such as demarches, pressure on companies not to sell equipment to India and the alleged buzzing of an Indian warship that had transited through the disputed portion of South China Sea. 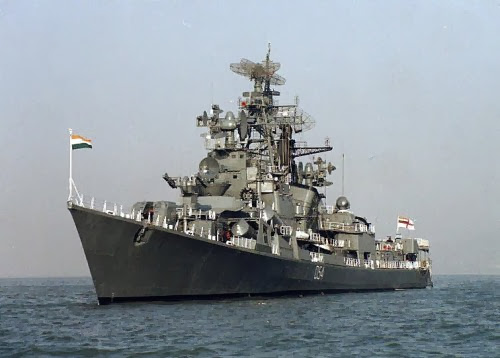 Coming back to the visit of the high official from Vietnam, one of the agreement that was signed in his presence, was about oil exploration. Vietnam now has offered India seven oil blocks in South China Sea, including three on an exclusive basis, and joint prospecting in some Central Asian countries with which both Hanoi and New Delhi have good political ties. The MoU on oil exploration is for three years and its contents have not been made available. Obviously this is to avoid any Chinese resentment. It is not possible at this stage to ascertain if the blocks that have been allocated to India fall in disputed portions of South China Sea that are under Vietnam’s jurisdiction but are being claimed by China.

Some of the other agreements pertain to collaborations in the defence field. India has already agreed to train 500 Vietnamese submariners and will transfer four naval boats under a $100-million credit line. India will continue to assist Vietnam in modernisation and training of its defence and security forces. Both countries say that this defence cooperation is a “significant pillar” of strategic partnership and note the increased pace of defence dialogue, training and exercises, ship visits, capacity building and exchanges between think tanks.

More agreements were signed in the area of energy cooperation. A MoU formalised Vietnam’s decision to award an Indian company, Tata Power, a $1.8-billion thermal power project. An air services agreement also was signed. This could lead to direct flights between India and Vietnam, giving a boost to trade and tourism.

I would wish to see more media interaction and discussions amongst experts on such kind of important agreements in the media, which appear pr-occupied only with election news and other news that almost borders with yellow journalism.