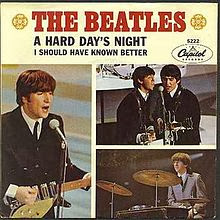 No listing of long forgotten musical tracks can be said to have a semblance of exhaustivity, unless we have Beatles on it. The song of this week is from Beatles, which is the one I like most. It is titled 'Hard Days Night,' and was released first in 1964. The song featured prominently on the soundtrack to the Beatles' first feature film, A Hard Day's Night, and was on their album of the same name. The song topped the charts in both the United Kingdom and United States when it was released as a single.

You can also copy and paste the link http://youtu.be/zSm0M-BbVdY in your You Tube App. If that also does not work, search You tube, Beatles Hard Days Night.