Cambodia retains it's piece of history 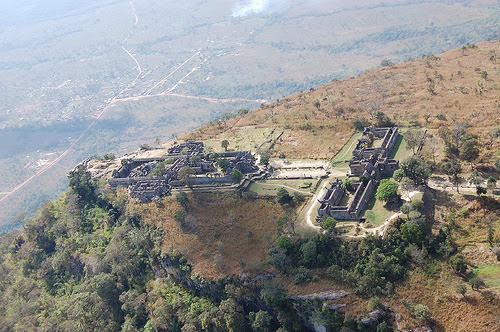 Somewhere between 9th and 10th century CE, Cambodia's Hindu Khmer kings decided to construct a new Hindu temple complex atop a 525-metre (1,722 ft) cliff known today as 'Pey Tadi,' in the Dângrêk Mountains, located in the present Preah Vihear province of Cambodia. They named it as “Prasat Preah Vihear” or “Palace of sacred abode.” Because of the spectacular view extending to many kilometers across a plain, Prasat Preah Vihear has the greatest setting amongst all of the temples built during the six-centuries-long Khmer Empire in Cambodia. Construction of the temple is believed to have began first in early 9th century, but most of the temple was constructed during the reigns of the Khmer kings Suryavarman I (1002–1050) and Suryavarman II (1113–1150). 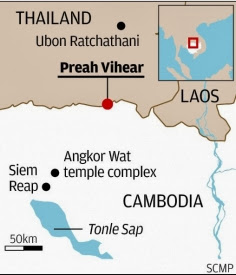 After the great Khmer empire of Cambodia began its slow decline after reaching it's zenith, a new empire known as the Ayutthaya Kingdom, began to rise in the west or in what is called today as state of Thailand. Most of the growth of this kingdom happened at the cost of Khmer territories like Battambang, Siem Reap, Banteay Meanchey and Oddar Meancheay provinces of today's Cambodia. Temple of Prasat Preah Vihear, being much to the northeast of the later capital of Khmers at Siem Reap also naturally fell to the Ayutthaya Kingdom.

In the Nineteenth century, after having established their control over Cambodia, the French forced a treaty on Kingdom of Siam (Thailand) known as the Franco-Siamese treaty of 1867. According to this treaty, Siam was forced to renounce suzerainty over Cambodia, with the exception of Battambang, Siem Reap, Banteay Meanchey and Oddar Meancheay provinces, which were then officially incorporated into the Kingdom of Siam. However, during the 1904 state visit of King Rama V of Siam to France, Siam agreed to cede the four provinces to France in exchange for regaining Thai sovereignty over Trat Province and Amphoe Dan Sai of Loei Province, which had been occupied by France. 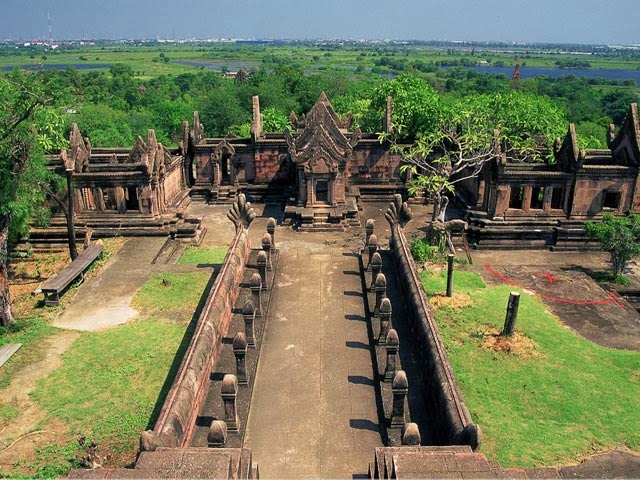 In 1904, French and Siam had agreed to mark the border between Cambodia and Siam that would follow the natural watershed between the two countries. In 1907 the Thai-Cambodian border was actually mapped by the French as per this agreement. However, the final map showed Prasat Preah Vihear temple on the Cambodian side, though this deviated the 1904 agreement. Surprisingly, Siam accepted this map, probably due to oversight and only realised the error much later in 1930 and this is where the border row began.

The dispute was taken subsequently to the International Court of Justice (ICJ) in The Hague, Netherlands, Which in 1962 awarded ownership of Prasat Preah Vihear Temple to Cambodia by a 9 to 3 vote, based on the 1907 map (correctly drawn or not.) mentioned above. However, the court ruled that only the temple belonged to Cambodia, and did not comment about the adjacent land to the north of the temple. The exact words that were used in this court order say: “Thai forces were obliged to withdraw from the temple or in its vicinity on Cambodian territory." This court ruling brought up a new border dispute as Cambodia and Thailand interpreted the word 'vicinity' in different manners. Meanwhile in 2008, The United Nations Educational, Scientific and Cultural Organisation (UNESCO) put the temple, on its world heritage list in 2008 saying "an outstanding masterpiece of Khmer architecture, in terms of plan, decoration and relationship to the spectacular landscape environment". This gave a new dimension to the already simmering dispute.

Cambodia claimed that it was given 4.6 Km around the temple by 1962 judgment and again went back to the International Court of Justice in 2011, following several clashes between its army and Thai forces, to ask exactly what judges meant by "vicinity" in 1962.

After a wait of two years, International Court of Justice has given its verdict this week ( on 11th November 2013) to clarify what it meant by vicinity. Court did not give any new maps with the judgment, but said that the rocky plateau on which temple stands is bordered by steep slopes on most sides and by a border line drawn up in 1907 by a commission of French officials to the north. It gave an area of 1 sq. Km, which it considered as the area in the vicinity of temple to Cambodia, leaving rest of the plateau to Thailand. It asked the two countries to work out the border amongst themselves.

On the surface at least, both countries appear to be happy with the verdict. Many Thai villagers, who live close to the disputed Preah Vihear temple had moved away from the area fearing armed clashes, began returning to their homes after the court verdict. By any logic the court verdict appears to be a sound one. Prasat Preah Vihear Temple has been and is a legacy of Cambodian people and it has been accepted that they can keep it as their national treasure.