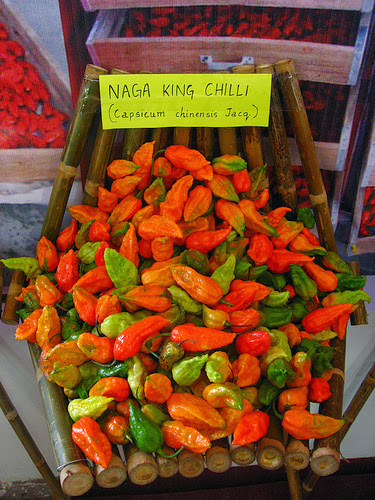 All over the world, hundreds of different varieties of chilies are grown. Not all chili varieties are hot enough. Some varieties like Capsicum chilies are not hot at all. To measure the hotness of any particular variety of chili, Scoville scale of hotness is usually employed. Each and every variety of chili contains a chemical known as 'Capsaicin' and the hotness of the chili depends on the percentage of this 'Capsaicin' present in that chili variety. 'Capsaicin irritates the nerve ends on our skin as well as in our throat and we sense the feeling of irritating hotness.

Cassaicin in purest form, is given 160 Million points on the Scoville scale. On the other hand, Capsicum chili or Bell pepper, gets Zero points because of almost Nil percentage of Capsaicin present in this variety. Mexican Jalapeno or Hungarian Paprika chillies get in between 2500 to 8000 points. Tabasco chilies, which are used in preparation of famous Tabasco chili sauce, are given between 30000 to 50000 (30K to 50K) points. Normal Indian and Thai chillies are rated with 50 K to 100K points. The famous and very hot chili of south America known as 'Habanero' and Red chili from 'Guntur' district of Andhra pradesh state in India, are given between 100 K to 350K points on Scoville scale.

The red chili, that has been indisputably crowned so far, as the Hottest chili queen of the world, comes from the northeastern states of India and is called as 'Bhoot Jolokiya'. This chili on Scoville scale gets 1 Million points. This chili is so hot that Indian soldiers deployed in this region use it even for novel applications. If a bunch or cluster of these chilies is kept hanging outside a soldier's tent, it prevents any wild animal coming nearer to the tent, due to pungent and irritating smell of 'Bhoot Jolokiya'. A small trace of this chili, if mixed with food, makes it very testy and generates improved blood circulation and a feeling of warmth for soldiers on duty in cold climates. In February 2007, the Guinness Book of World Records certified Bhoot Jolokia as the hottest chilli pepper in the world. As per findings of Professor Paul Bosland, of New Mexico State University Chile Pepper Institute, in 2005, the SHU rating was 1,001,304. Earlier, in 2004, Frontal Agritech of Assam, had claimed a rating of 1, 041,427 SHUs.

A new commercial avatar of this ' Bhoot Jolokiya' chili has now appeared on the horizon. The new chili avatar has been named as “Naga Mircha (Chili),' and comes from India's Nagaland state in far east. Akali Sema, Professor of the Department of Horticulture in the School of Agricultural Sciences and Rural Development of the Nagaland University, says that Naga Mircha has been granted the Geographical Indication tag in 2007. 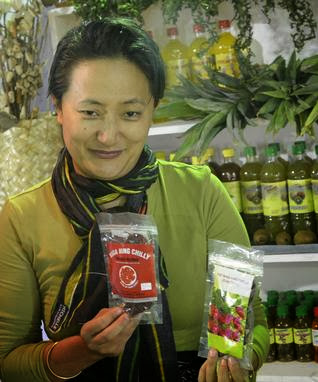 'Naga Mirch' is being sold in India around Rs. 1,800 to 2,000 a Kg within India and is also being exported to several foreign countries. Processed chilli and pickles made from it are also being marketed. According to an exporter, the demand is growing and supplies are in short. This chili grows only in a particular region of Nagaland as the crop is very sensitive to weather conditions. Efforts are being made to increase the area under cultivation of this chilli by organic farming.

If any of the readers love spicy hot food, this is the time to shift to 'Naga Mirch,' which would more than satisfy you.