The Worst and the best! 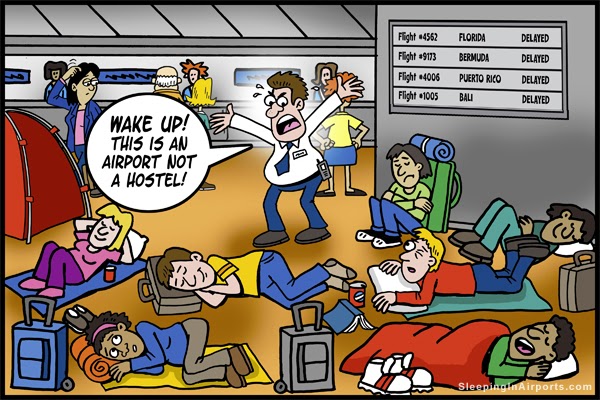 If you ask any frequent air traveller as to the best airport, he or she has been through. The most likely answer would be either Singapore's Changi airport or Amsterdam's Scipol. On what basis do travellers say this? What are the parameteres on which people consider an airport better than other? Recently, I found a web site, The Guide to Sleeping in Airports, that tries to answer these questions and does it rather well. It lists 4 'C's on the basis of which most of the travellers would judge an airport. These are:

Comfort: crowded terminals or uncomfortable/limited seating
Conveniences: no 24-hour food options or nothing to do on a layover.
Cleanliness: dirty floors, bathrooms or food courts.
Customer Service: unfriendly staff or anti-airport sleeper policies.

I have been through many airports of the world. I have found, some extremely dirty and shabby like most airports in India are, some are very professional and machine like, there is no personal touch at all. Giant US airports like O’Hare at Chicago or JFK in New York or I would even classify San Francisco International airport in this category. If you are stuck at one of these, you would be bored to the core, as there is nothing to do at all. At some airports, everyone watches you with suspicion and you feel uncomfortable. I had this feeling in Cambodia's Siam Reap airport. In some airports, confusion reigns supreme, you are always under tension, whether you are going to catch the flight or not. India's Chennai airport is a typical example. Some airports are just confusing, like London's Heathrow. I can go on and on, but I am not writing this post just to give my readers my impressions about the world's airports.

The web site that I have mentioned above, regularly invites it's visitors to share their airport experiences on the web site. It carried out a poll recently to find out which are the worst and the best airports in the world. Readers from India, and those, who have been in India must have already guessed it. Three of India's metro airports figure in the worst airports of the world list, with Kolkata at number 3, Chennai at number 6 and Mumbai at number 8, ratings that are not even optimistic. Only point of consolation perhaps is that the worst airport in the world is not from India but Manila's Ninoy Aquino airport in Philippines.

In the best airport list, Singapore's Changi tops the list followed by Incheon at Seoul and Amsterdam. A survey respondent says about Changi: “ Silence is mandatory in the "Snooze lounge" which boasts very sleepable chair lounge, you can even ask for bedcover.” Another one says that Showers area available for a fee and food is available 24-hours. 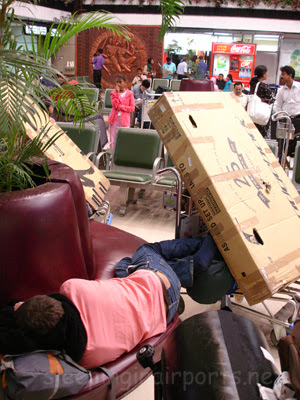 Coming back to Indian airports, perhaps the main problem is that the travellers are not let in, even in check in counter area 3 to 4 hours before flight timing, leave aside early check in. This means that if you have a connecting flight and you arrive at the airport from some other destination, say 7 or 8 hours earlier. You would be forced to sit outside the airport on the footpath, watching your baggage. Many travellers find this very irritable.

I would like to end here with an experience of a traveller about Mumbai airport quoted on the web site mentioned above, I am sure that many hapless travellers like me, must have experienced this situation sometime or other. I quote:

“After landing past midnight and taking a bus to the terminal from the aircraft parking spot, we were greeted with a sight of sea of Muslim men and women returning from the holy pilgrimage. Had it not been the large sign in black and yellow on top of the terminal building proclaiming its name, I would've thought I were in Mecca! The queue to get through immigration was more than a mile long - however the processing was swift with numerous counters. Getting bags out of the cramped baggage collection area was a challenge though, since the carousels are notoriously short and people were literally standing on top of one another yet helplessly seeing their bags pass by - just out of reach :) Once you get your bags and clear customs - there is absolutely no waiting area (@ Arrivals) - you need to either exit the terminal or take the transfer shuttle to either of the domestic terminals. I had more than 12 hours to pass before my domestic connection hence after converting some currency at a bank located within the arrivals area, I decided to go to the domestic terminal. To my surprise, the folks @ the domestic airline wouldn't take my baggage before the check-in time! So I had to wait there with my bags for full 12 hours, depending on total strangers to look over my bags while I went to the bathroom a couple of times. There is a small cafeteria in the check-in area selling snacks and beverages at exorbitant prices. I later learnt that there is a much better cafeteria in the pre-boarding area. The newly renovated departure area @ the international terminal is surprisingly good and well-maintained with loads of eating places. All in all, I'd say not too bad an airport, but a few things need to change to increase passenger comfort.”