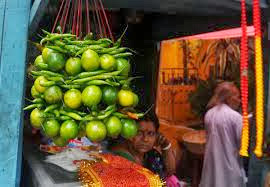 If any of my readers happens to visit my home town Pune in India, the first thing he/she would notice on arrival, would be the 3 wheeler, black and yellow coloured taxis, plying on the roads. If the visitor is more curious and looks carefully at these taxis, often called as 'Rickshaws,' he would not fail to notice a cotton thread with a string of a lemon and few green chillies, hung from the body of the vehicle almost grazing the road.

This would be his first view of deep rooted blind faith system of the Indian masses in black magic, superstition and occult practices as this lemon-chilli string is supposed to ward off evil thoughts of enemies of that taxi owner and any attempts of black magic done on him. Traditionally, Indians are ridden with age old beliefs and faiths that are almost impossible to get rid off. Besides black magic, most believe in an ancient cult, which believes that the design of a dwelling and the way things( furniture, beds) are arranged in it, has an effect on the future of that person and whether he would find happiness in the house or face perils. His future in short, is dependent on design of his dwelling. 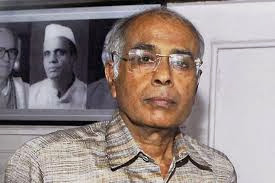 There have been many crusaders, who have given their lifetimes to this cause of eradication of age old beliefs and faiths in the Indian society. One such crusader of our times, who stands out, was Dr. Dabholkar. Sadly, he was shot and killed on 20 August 2013, by some still unknown assassins, obviously hating him for his fight with black magic. Dr. Dabholkar was a rationalist, atheist and a social worker. His greatest achievement was setting up in 1989, an organization that fought for eradication of superstition and created an army of followers who staunchly believe in his ideas.

In 2010, DR. Dabholkar made several failed attempts to get an anti-superstition law, enacted in the Indian state of Maharashtra. It was met with political opposition, which said that it would adversely affect Hindu culture, customs and traditions. Dr. Dabholkar had clarified that in the whole of the proposed law, there was not a single word about God or religion. The Indian constitution allows freedom of worship and nobody can take that away, this was about fraudulent and exploitative practices. Only after his death,the Maharashtra Cabinet cleared the Anti-Superstition and Black Magic Ordinance, however the state parliament would still need to support the bill for it to become the law. 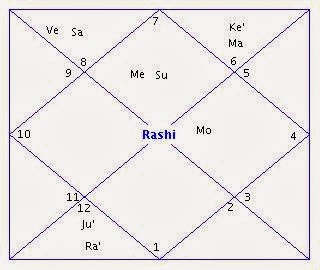 In 2009, Dr. Dabholkar, along with an eminent astrophysicist, Dr. Jayant Narlikar and few others, carried out a statistical experiment that is little known. The results were published in the issue of the magazine 'Current Science' in March 2009. This study relates to a traditional practice in India of preparing a horoscope for a person. Horoscope is a cellular table, drawn on paper. Each of the real and imaginary planets are assigned a particular cell in this table, this assignment of the planets to a particular table relates to the planetary positions in the sky at the time of the birth of that person or at some other point in time. It is believed that the personal qualities, characteristics and his actions in future are all decided and controlled by his/her horoscope. It is also believed that the horoscope can tell whether a day or a period of time would be beneficial or favourable to a person or would bring doom to him.

Unfortunately many learned and otherwise rational people, including politicians, senior bureaucrats and decision makers,blindly believe in this horoscope that they would not take any crucial decisions unless their horoscope dictates that the time is favourable to them. Such believers would not consider marrying their children to a suitable boy or a girl unless their horoscopes have a so called match.

Coming back to the statistical experiment done by Dr. Narlikar and Dr. Dabholkar, I quote from the abstract of the report:

“This paper describes a recent test conducted in Maharashtra to test the predictive power of natal astrology. It involved collecting 200 birth details of 100 bright school students (group A) and 100 mentally retarded school students (group B). These details were used to cast horoscopes or birth charts for these children. After recording these details the charts were mixed and randomized and astrologers were invited to participate in a test of their predictive ability. Fifty-one astrologers participated in the test. Each participant was sent a random set of 40 birth charts and asked to identify to which group each chart corresponded. Among the initial 51 participants, 27 sent back their assessment. Statistical analysis of the results showed a success rate marginally less than what would be achieved by tossing a coin. The full sample of 200 birth charts was given to the representatives of an astrology institute for identification. They also did not fare any better. The limited but unambiguous procedure of this test leaves no doubt that astrology does not have any predictive power as far as academic ability is concerned. Ways of extending the scope of this test are discussed for future experiments.”

Unfortunately, superstition, blind faith and belief is such an integral part of the mental frame up of Indians that no rational thinking helps. I read a news item today itself, that when India's Mars spacecraft was moved from the manufacturing plant in Bengaluru city to the rocket launch pad on east coast of India, Rocket and space scientists dealing with cutting edge space technologies, performed a religious “Pooja” or a worshiping ritual for the spacecraft, before it actually left for the road. With this kind of mentalities prevalent in the society, one can well imagine the obstacles and difficulties, Dr. Dabholkar must have faced in his mission to eradicate superstition.

Dr. Narlikar, who was the co- experimenter, in above mentioned experiment, has recently come out with some startling facts about Astrology itself. He says:

"In the Vedic era, there was never a seven-days-a-week concept. Similarly, astrologers were also not known at the time. They came later, when Alexander came to India and brought several of them along with him. They stayed back after he left India. Indians carried forward astrology." He adds that people should first test the credibility of the predictions made by the astrologers by using the yardstick of statistics and scientific approach and matching horoscopes by astrologers and the predictions made by them is not accurate and hence people should not depend on them.

Unfortunately, not many would believe him. That is the sad part of the whole story.