Believe it or not!

'Airport' was a 1970 Hollywood blockbuster film starring Burt Lancaster and Dean Martin that had grossed nearly $100,500,000. This film, based on a bestseller Arthur Hailey's 1968 novel of the same name, focuses on an airport manager trying to keep his airport open during a snow storm, while a suicidal bomber plots to blow up a Boeing 707 airliner in flight. The story took place at a fictional Lincoln International Airport located near Chicago, Illinois in USA.

Great success achieved by this film, opened the floodgates of films about disasters on airplanes and airports. Number of new films on similar subjects were released in later years. One of the favourite subject for such air disaster films was the mid air incapacitation of the pilot due to some reason or other and then successful landing of the aircraft by a passenger, with very little prior flying experience.

Actually, two films, touching the same subject and titled as "Flight Into Danger" (1956) and "Zero Hour" (1957), were released much before “Airport.” The former film showed the pilots falling victim to food poisoning and a small planes pilot t taking over the controls of a large passenger plane. In the latter movie once again the passengers and pilots were affected by food poisoning. In this film, an air force pilot, lands the plane. Other films about airplane disasters include, "Airport 1975" (1974), "Snakes on a Plane" (2006), "United 93" (2006) and "Air Force One" (1997).

Readers might be wondering as to why I have been listing Hollywood flicks here. The sole reason for this is that these kind of incidents, which I had so far considered to be the realm of Hollywood imagination, has actually become a reality. It is surely a case for believe it or not!

Sandtoft Airfield, also known as Sandtoft Aerodrome, is located in Belton, North Lincolnshire, England. It is managed and operated by Sandtoft Flying Club Ltd.,who operate a flying school and cafe at the airfield. On 8th October 2013, a Cessna 172 aircraft took off from this airstrip, with only two people on board, the pilot and a lone 77 year old passenger, John Wildey. They were scheduled to fly to Skegness, which is a seaside town and civil parish in the East Lindsey district of Lincolnshire, England. The flight was uneventful and later the passenger- Pilot duo, again took off from Skegness to return to Sandtoft. As they were nearing their destination, the lone passenger in the aircraft, John Wildey realised that the pilot had just collapsed in the cockpit of the plane. He instantly became aware that he was in serious trouble, because even though he was a flying enthusiast, he had never had taken a flying lesson. He had flown before on several occasions as a passenger but never flown an aeroplane on his own before. He didn’t know the layout of the aeroplane. He didn’t have lights on so he was absolutely flying blind as well.

It is not known, how he managed to contact the air traffic control, which called two flying instructors to advise the passenger, named only as "John", on how to bring the plane down and a RAF Sea King helicopter was scrambled to provide assistance. Under instructions, John Wildey actually changed the flight course to a nearby airport at Humberside. This Airport is a small international airport, situated at Kirmington in the Borough of North Lincolnshire, England.

The two instructors talked down to John Gildey and correctly brought the plane on the runway. Deborah Zost, operations director at Humberside Airport says: “ "We had to get him to do two to three circuits. The last one was not very good so we told him to go round again and on the fourth one he managed it. He did a beautiful landing in my opinion. He was calm. He was answering the calls I made to him quite professionally. I would not be frightened to fly with him."

Observers on the airfield saw sparks as the plane landed. It came down with a bump, hit the front end down, I heard some crashing and it came to a halt. Police, fire and ambulance crews, who were ready at this North Lincolnshire airport, removed the passenger and the pilot out from the light aircraft at about 18:25 PM. And the aircraft was towed away as if nothing had happened. Only Two incoming flights were delayed in the whole affair. Only then it was realised that the pilot had actually died in his seat. 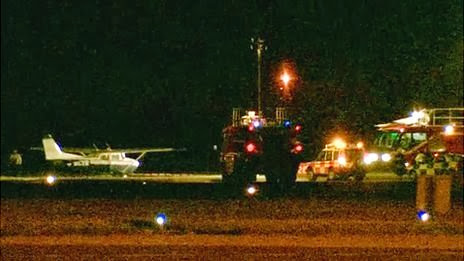 Later, John Wildey spoke to reporters. He said: " I had plenty of doubts, because I just didn't know what was going to happen. Luckily [the instructors] were talking to me on the radio all the time, so that was helping me. They gave me confidence." He was however very sad for the loss of his pilot friend, who according to him was a brilliant man.

One of the flying instructors, Roy Murray, who brought John Gildey safely down says: "For somebody who is not a pilot but has been around airfields and been a passenger on several occasions to take control is nothing short of phenomenal. The man is nothing short of a hero."

I think all of us would agree with that, won't we?