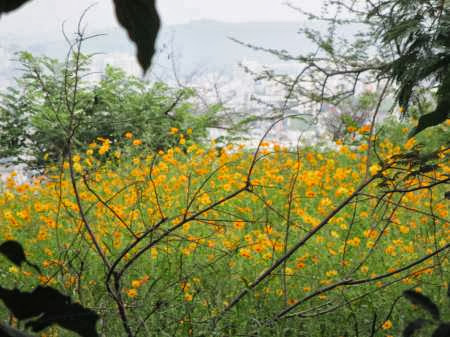 In the modern history, there never has been a dearth of doomsday scenarists, appearing suddenly on the scene from no where and predicting total collapse of nations, mostly from developing world, or environment. Most of these doomsday specialists somehow are always from Europe or United States. I would always consider the classic case of Paul Ehrlich, a professor from Stanford University as a forerunner of these doomsday specialists, who came out with a book in 1968, which he called as 'Population Bomb.' He had predicted in this book a bleak future and doom for the Indian people. He said in this book that in decades of 1970 and 1980, millions of Indians would die because of starvation, as Indian agriculture was totally incapable of feeding the rising population. Well everyone knows that nothing of the sorts happened and today Indian farmers instead of dying from starvation are producing bumper crops year after year and India is a major food grain exporter.

Another popular theme of these so called Prophets of doom, is the climate. During the 2000 decade, so much of publicity was given to green house gases and heating of our planet that I had started believing that the weather in my home town Pune, which is famous for its moderate kind of environment, would soon turn into some kind of Sub-Saharan conditions in next few years. Obviously I was wrong and nature has so far conserved and taken care of the moderate weather of my dear town, as it has been over last century. The summer temperatures here seldom exceed 40 deg, Celsius and the pattern still continues. The rains come on time and fall as usual. The October nip is on the dot. The living conditions are getting horrible but you need to blame influx of motor vehicles and job seekers to the city. Poor nature carries no blame for that. 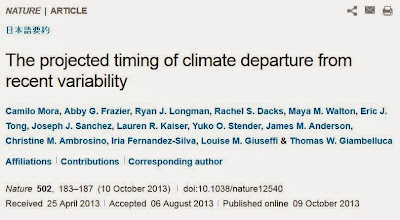 A huge study based on data and lots of computer modelling has been just published in the scientific journal 'Nature.' It talks about the weather change in a different terminology and uses a phrase it lables as “Departure Temperature.” This so called departure temperature is “ the moment when average temperatures, either in a specific location or worldwide, become so impacted by climate change that the old climate is left behind.” This report projects that almost all the livable areas of the the Earth,would pass climate departure by 2047. In other words, by 2047, the present pattern of world weather would change completely. The report also gives years by departure temperature would have passed in dozens of specific cities. A city is supposed to hit "climate departure" year, when the average temperature of its coolest year from that year onwards would be projected to be warmer than the average temperature of its hottest year between 1960 and 2005.

Consider my home town Pune, for which the departure temperature is suggested as 2045. This means that the average temperature of every year after this is likely to be higher than the highest yearly average temperature of Pune during years 1960-2005. In a layman's language, after 2045, the people living in Pune city would start feeling the climate change. The report also considers two scenarios. The first scenario, which it calls “without carbon mitigation,' is what would happen with business as usual or no steps taken to reduce carbon foot print. The second scenario is called by the report as “with carbon mitigation,” and which means that the city has undertaken steps to reduce carbon foot print. For my city of Pune the departure temperatures have been estimated as 2037 and 2055 in these two scenarios. 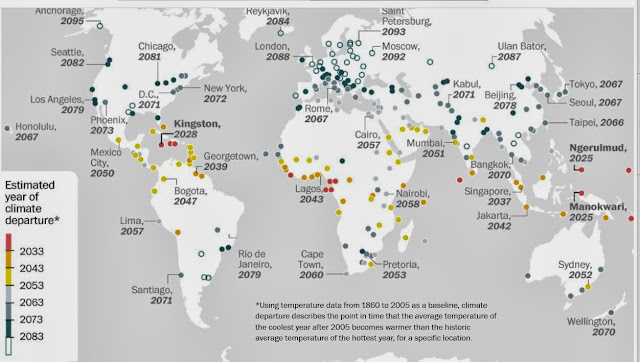 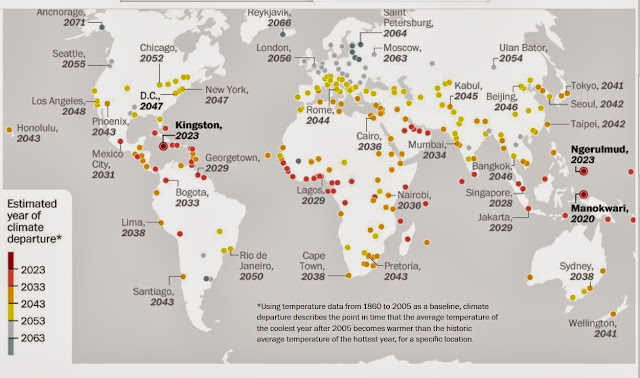 The report says “ the unprecedented heat starts in 2020 with Manokwa, Indonesia. Then Kingston, Jamaica. Within the next two decades, 59 cities will be living in what is essentially a new climate, including Singapore, Havana, Kuala Lumpur and Mexico City. By 2043, 147 cities, more than half of those studied, will have shifted to a hotter temperature regime that is beyond historical records. The first U.S. cities to feel that would be Honolulu and Phoenix, followed by San Diego and Orlando, Florida. in 2046. New York and Washington will get new climates around 2047, with Los Angeles, Detroit, Houston, Chicago, Seattle, Austin and Dallas a bit later.”

The year 2047, according to this report is all important threshold year with whole world continually increasing emissions of greenhouse gases from the burning of coal, oil and natural gases. If the world manages to reduce its emissions of carbon dioxide and other gases, that would be pushed to as late as 2069.This really means that in any case, we are heading for a climate disaster, either in 2047 or 2069 depending upon our efforts to reduce greenhouse gases.

So what do we do with report? Senior citizens like me would be happy to note that as long as we are here, things are not likely to change much. The younger generations are likely to be affected. But even if we reduce green house gases, we can only push the departure year by 20 odd years. That is no big deal.

Though I have great respect, for the scientists, who have come out with these predictions with some 39 different computer simulation models and looked at hundreds of thousands of species, maps and data points, I have a feeling that things may not turn out to be this gloomy. The first reason for my feeling is that nature does not follow any mathematical models and we have not yet understood it even to a fraction of a percentage. Secondly I have great respect for the ingenuity of man. If the situations become that serious, the man would find a solution so he survives. If the cities really become unlivable as the report suggests, humans can always migrate to underground.

If one studies history of earth, there had been far worst situations like ice ages and 1000 year long nuclear winters due to meteorites hitting the earth or outbursts of giant volcanoes. The mankind has survived all such catastrophes that have happened during its existence. This warming of earth may not turn out to be a catastrophe of that kind, which would challenge the very existence of the mankind. I would not be too much worried.