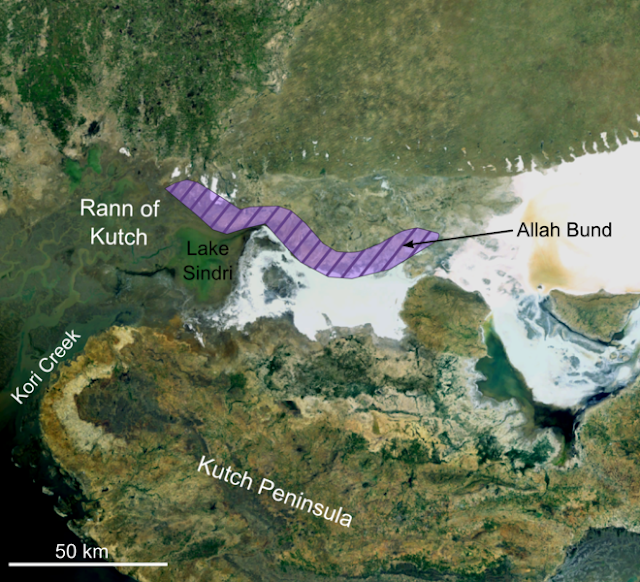 India faces a long western border with Pakistan, which was created by bifurcating the sub-continent in 1947. However, even from earlier times, the southern part of this border did exist, though not between two sovereign states but either between two vassal states under British suzerainty or between lands directly controlled by British and a vassal state. In the western corner of India, bordering the Arabian Sea, the kingdom of Kutch, became a "vassal" State under British Paramountcy by virtue of the Treaty executed on 13 October 1819, between the East India Company and the rulers of Kutch, which was ratified and became operative on 4 December 1819. To the north of this vassal state, lay the Emirate of Sindh (presently in Pakistan) ruled by Mir Ghulam Ali Khan Talpur. Emirs of Sindh and British were at loggerheads, but at that time, Sindh remained an independent country. 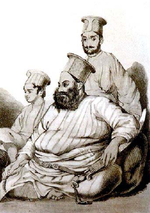 So, how were the borderlands between Sindh and vassal kingdom of Kutch were defined at that time? This entire area was then known as delta of the Indus river with this mighty river emptying into the Arabian sea through a huge network of small rivers and rivulets branching off from the main river body, which also emptied the waters directly. Two southernmost outlets of the Indus, are of particular interest to us. A river branched off from the main river body near the town of “Banna” and was called as “Pinyaree” or “Goongra” river and its mouth through which it emptied itself into Arbian sea was known as Seer or Sir. South of Seer mouth was another river mouth known as “Koree” or “Eastern mouth of Indus.” This “Koree” or “Kori or Puram” river branched off from main Indus water body near Hyderabad and flowed southwards and then westwards to meet the Arabian Sea. South of Kori river lay the fortress of “Lakhpat” with a garrison of Kutch soldiers posted there. 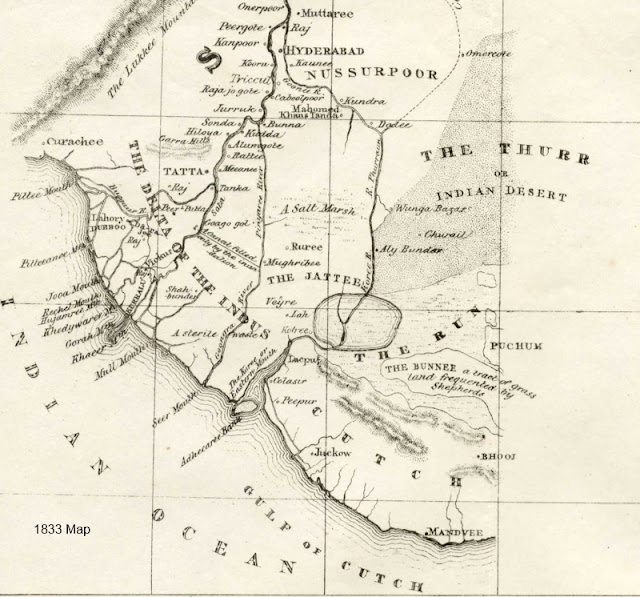 The land between these two river mouths was historically known as “ Sayra” and was a fertile, rice-growing, inhabited area belonging to Kutch. Around year 1762, the water supplies to this region dried up and Sayra was deserted and gradually disappeared and became indistinguishable from the Rann of Kutch. A question naturally arises as who was controlling this region? The state of Kutch or Emirate of Sindh? From the old maps and records it appears that the state of Kutch maintained garrisons at number of places and had build forts along the river banks. There were also number of customs posts.

Sindri was a place on the eastern bank of the Kori River in the “Sayra”, about 30 miles upstream from Lakhpat and 20 miles downstream from Ali Bandar in Pakistan at approximately 24° 5' North latitude; it was a port for river boats, a village and a frontier post with a customs house of Kutch State. The Kutch garrison was stationed in a fort which consisted of a single tower 50—60 feet high and of a elevated tract of 150 square yards, the whole surrounded by a 20 feet high wall. About 5 miles north of this place was a small border post known as “Kaeera” located on a rivulet known as Kaeera Nulla. Cutch Government also collected taxes from this post. In the south, there were number of small forts and customs posts at places known as “Kothadi,” “Bastar Bandar,” and two posts in north called “Veyre” and “Lak.” I have given these details so that the reader can imagine the state of things before year 1819. Bastar Bandar is mentioned in a book “Memoir to accompany the Survey of the Delta of the Indus, in 1837, by Lieut. T. G. CARLES, Indian Navy. as “ on the opposite side of the river there is a ruined fort, called Bastah Bander, which formerly belonged to the Raos' of Kach'h, and was destroyed by the Sindians during their wars with those princes.” 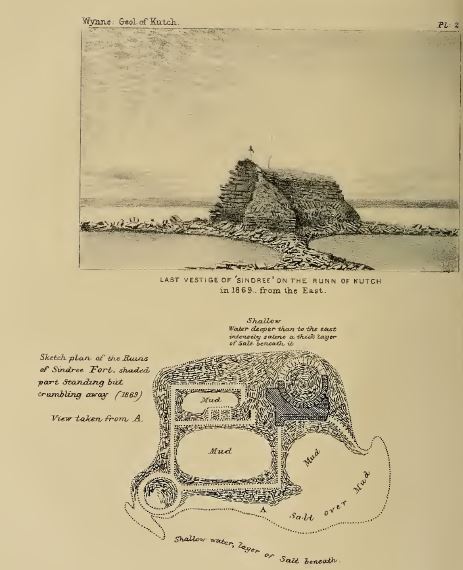 The first disaster struck on 16th June 1819, when a massive earthquake hit this region. It had an estimated magnitude ranging from 7.7 to 8.2. It triggered a tsunami and caused at least 1,543 deaths. The earthquake created a depression in ground near Sindree fort, which was quickly filled with sea water. Later water of Koree river also flowed in. This body of water is known as Sindree lake, now a salt marsh. Perhaps the most interesting effect of the earthquake was the uplift of an area to the north of Sindree lake forming a bund, that was about 80 km long, 6 km wide and 6 m high. This bund dammed the Kori or Puram river. This natural dam became known as the ("Dam of God"). 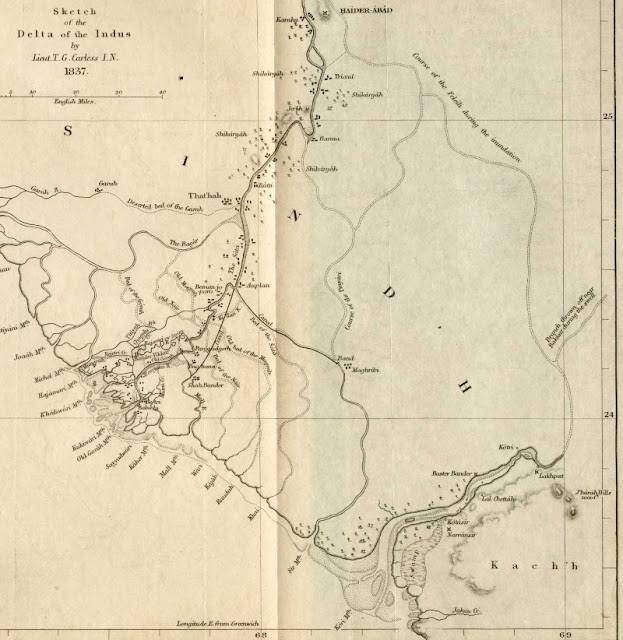 The Sindree fort and Kaeera post were totally destroyed in the severe earthquake and were abandoned. It remained known as a ruin of an old fort, under the name of Juna Kotri till late in the nineteenth century. Finally all traces of it disappeared.

Readers can imagine the profound effect this quake must have had on the topography of the region with a natural bund formed in east west direction. The Allah Bund formed a natural border between State of Kutch and Emirate of Sindh. For this reason, 1819 earthquake is many times called as Allah Bund earthquake.

1819 earthquake did not affect the flow of waters of Seer or Pinyaree river but completely affected the fate of Kori river. Henceforth the Kori river bed had water only when Indus waters inundated the areas around Allah Bund. The low water levels in Kori decreased the river traffic substantially.

Then on June 19, 1845, another major earthquake hit the area followed by a Tsunami wave. An eyewitness account was published in Quarterly Journal of Geological Society in December 1946 and I quote:

"One of Capt. McMurdo's guides was travelling on foot to him from Bhooj. The day he reached Luckput there were shocks of an earthquake, which shook down part of the walls of the fort and some lives were lost. At the same time as the shock the sea rolled up the Koree (the eastern) mouth of the Indus, overflowing the country as far westward as the Goongra river (a distance of twenty English miles), northward as far as a little north of Veyre (forty miles from the mouth of the Koree), and eastward to the Sindree Lake. The guide was detained six days (from June 19th to 25th during which time sixty-six shocks were counted. He then got across to Kotree, of which only a few small buildings on a bit of ground remain. Most of the habitations throughout the district must have been swept away, the best houses in Scinde being built of sun-dried bricks, and whole villages consisting only of huts made of a few crooked poles and reed mats. The guide travelled twenty miles through water on a camel, the water up to the beasts body. Of Lak nothing was above water but a Fakeer's pole (the flagstaff always erected by the tomb of some holy man); and of Veyre and other villages only the remains of a few houses were to be seen.

There are said to be generally two earthquakes every year at Luckput. The Sindree Lake has of late years become a salt marsh."

This narrative would make it amply clear to the readers the total devastation caused by this quake and total destruction it brought to all the areas between mouths of Kori and Seer rivers.

The borderlands between state of Kutch and Emirate of Sind, which became international borderlands between India and Pakistan later, were thus naturally marked by Allah's Bund in the east and By Seer or Sir creek in the west, through which Seer or Goongra river flowed once. The lands between Sir and Kori river mouths, became vast low laying wastelands, with numerous water channels, where fishermen venture out to catch fish now. 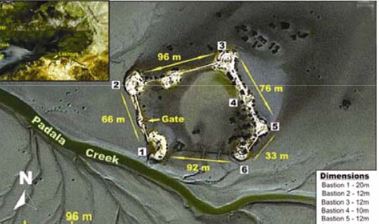 What happened to the Garrison or Customs posts like Kothadi and Bastar Bandar mentioned in books and maps published before 1845? Was any trace ever found? In February 2010, Mr. P.S.Thakkar, a retired scientist from Indian space research organization, discovered from Google Earth, images of a old fort half submerged on west bank of Kori creek. Accompanied by Border Security Force, Crocodile Commandos on speedboats, Thakker and three others managed to reach the fort of Bastar Bandar and took photographs and other measurements. 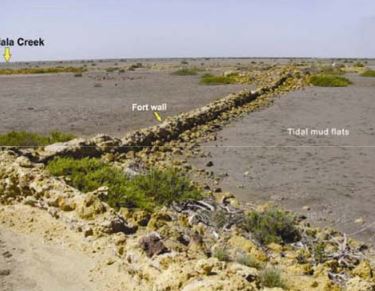 They came out with another surprise finding. According to him, “The 7.9-magnitude quake of 1819 not only created the Allah Bund, and Sindree lake, but also buckled the landmass that lies to the bund’s southwest.” This really means that this entire area between two former river mouths, was converted into a wasteland leaving the Sir creek as the only defining border feature.