Return of the Yogini 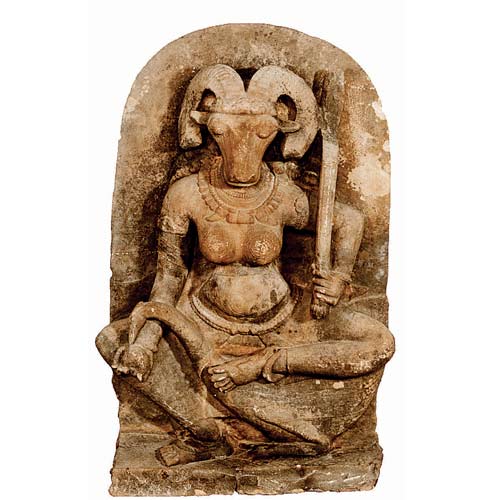 Lokhari is a small village in the Banda district in the state of Uttar Pradesh, India. The village had a ramshackle temple in which, a huge stone idol was worshiped by people of the village. The idol, with a big horned buffalo’s head and a female torso, was Four-and-a-half feet high and weighed 400kg. The large, ponderous idol , which no way could be considered as beautiful, was known as that of Vrishanana Yogini. She was one of the 64 Yoginis that is part of a mystical tantric tradition in India.

The culture of sixty-four Yoginis was the exuberant expression of extreme form of Tantricism in about 8th century A.D. when the occult and esoteric following reached the highest peak. Followers of this cult believed that the 64 Yogini Tantra or 'Chausathi Mahamayavi Tantras' as the fifth Veda. The Yoginis are sixty-four in number and are basically the mother-goddesses. According to an eminent modern scholar, the Yoginis were originally women or priestesses, who being possessed by the spirit of goddesses became Yoginis. The cult was rooted in sacred texts like Skanda Purana, Agni Purana, Kaulajnananirnayaand in lists called yogininamavalis.

A photograph of this sculpture had featured in a 1986 book, Yogini: Cult and Temples A Tantric Tradition, by art historian Vidya Dahejia, proving that it was in the village temple by that time. But sometime after that it just disappeared like many other thousands of idols that have been earlier looted out of the country. Till the the Antiquities and Art Treasures Act was notified by the Government of India in 1976, ancient Indian sculptures and paintings, which have been taken away from the country since the colonial era up to this year, have filled museums all over the world. The annual trade, by dealers and auction houses in these artifacts runs into millions of dollars.

The idol resurfaced in Paris in 2007, when the wife of a French art ‘collector’ Robert Schrimpf, applied to the Indian embassy in Paris, saying that she wanted to donate the sculpture to India as per her husband’s last wishes. In 2008, the sculpture was brought to the embassy where it remained for four years. A through examination by experts saw that the sculpture was modified and damaged by the looters. The thieves had chiselled the entire back stone slab of the idol and its base in a bid to make it appear new. “The original stone pedestal also was cut into half and two holes were drilled in to fit steel rods, probably for a stand,” says JE Dawson, curator (archaeology), National Museum, New Delhi.

Getting the idol back to India was not easy. Indian officials had to establish that the idol was of Indian origin and its authenticity to get permission from the French authorities to ship it to India. Indian Ambassador in Paris says: “ It was a lengthy and complicated process because permission had to be sought for the artefact to leave France. The French were very cooperative, and the idol has now returned to India and has safely been handed over to the National Museum.” 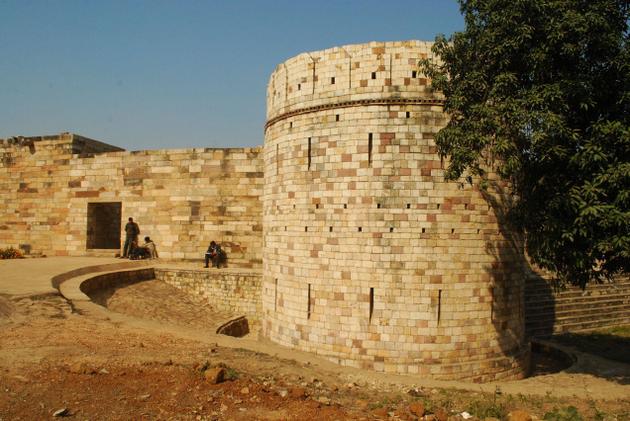 Some more sculptures were later found in the Lokhari village temple, including a rare one of a rabbit-faced Yogini sculpture. However all these were found severely damaged and have been kept at Garhwa Fort, a Gupta period temple relics complex near Allahabad by Archaeological Survey of India. 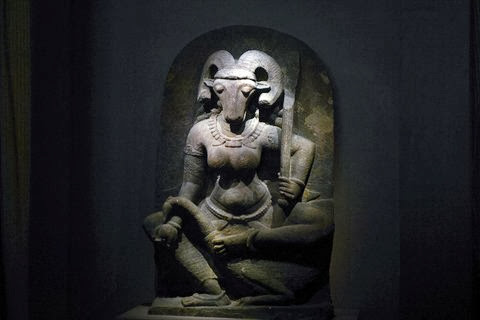 Archaeological Survey of India now proposes to have an exhibition at the National Museum, which will have just this one sculpture, and will highlight elements of the ancient Yogini cult. They feel that this exhibition would give a clear message with the show. Director General of National Museum says: “We want to sensitise villagers so that they become custodians of ancient artifacts and urge those who possess them to get them registered with the Archaeological Survey of India. We would also like collectors abroad who have ancient Indian objects to draw a lesson from this donation.”