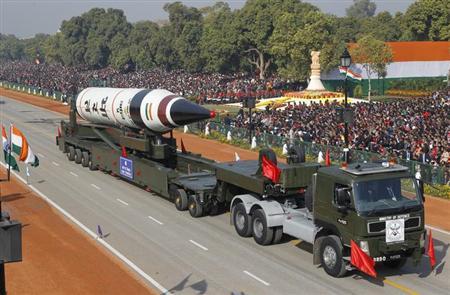 My father, during his active years, always kept a 12 bore handgun ready in a corner of his bedroom with few live cartridges handy. The gun manufactured by the British company BSA was a potentially lethal weapon. I once asked him, why he keeps the gun ready?

Instead of answering my query directly, he asked me to describe location of our house. I thought for some time and then described our house location to him saying that we have our bungalow on the outskirts of the city, almost as if we were is a rural area. There are just few houses in neighbourhood and their numbers can be counted by fingers on my hand. On east, we have, guava orchards spread over few miles. On north we have a water canal with reasonable amount of shrubs grown on both sides and towards west we have a patch of wilderness that ends with some foothills of the Western Ghat mountains, where real forest area begins.

My father responded by saying that with that kind of setting around the house, he is always afraid of two things. Proximity of canal and foliage next to house, means that an occasional snake or even a cobra might want to look around in our yard for some rodents and secondly, our house being isolated with so much wilderness nearby, there is always that slimmest chance of robbery in the dead of the night. So with my gun ready at my bed side, I and for that matter, all of us, can sleep soundly. That is why I keep the gun ready. I knew he was absolutely right because I then remembered few occasions, when some poisonous snakes were detected in the yard, and my father had shot them. 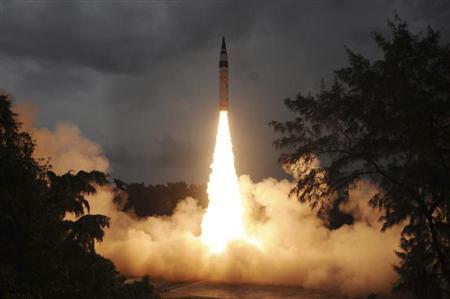 India test launched its longest range, nuclear warhead capable, missile, Agni V, for the second time yesterday, 15th September 2013 successfully. There has been a debate in some media about relevance of Agni programme. I feel that Agni V, has more or less relevance for the country, that my father's 12 bore shotgun had for our family. The Agni-V is the most advanced version of the indigenously built Agni ( Fire), series, part of a programme that started in the 1960s. First tested in April 2012, it is mostly domestically built and has a range of about 5,000 km (3,100 miles). This means that it can even reach Beijing in China and much of Europe.

India is hardly a war mongering country. People are peaceful by nature. So what is the need of such an missile? Answer to that is very simple, India has two neighbours on its west and east, who are ruled by hostile regimes, who keep on creating trouble on the borders. This means that India must have a strongest deterrent that would restrain these two from raking up any major trouble as they have done in past. What better way is there for deterrence, than having a nuclear tipped missile ready with us that can hit even remotest corners of our hostile neighbours? 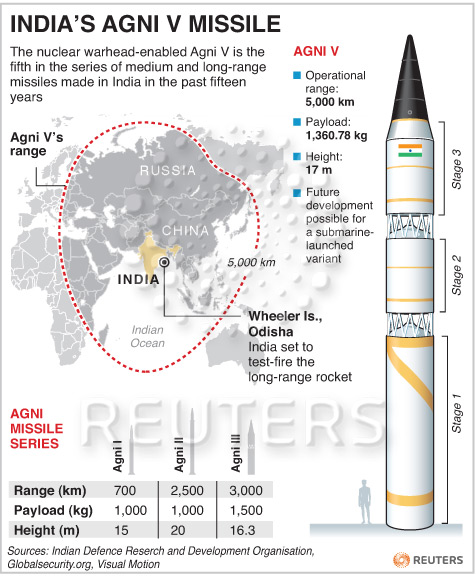 This morning, I read few comments about Agni launch in some foreign media. I found this comment saying: Is anybody really surprised that nearly half of India’s 1.2 billion people have no toilet at home? Quiet interesting! But obviously the commentator is missing the point. For an individual or a nation, safety has to be its paramount concern. A measure to protect oneself, can not be just compared with number of toilets or any other amenity.

Just like my father's shotgun, Agni V is therefore very relevant and necessary. It has to be ready all the time, so all the Indians can sleep peacefully.