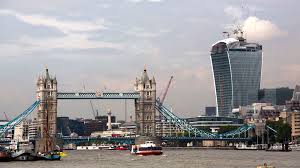 This summer, Londoners have been shielding their eyes from the intense blinding glare, whenever they have to pass through a patch on the street known as Fenchurch Street in London's financial sector. This glare is coming from a 37 storey glass facade building under construction, which has been nicknamed as “Walki-Talki” because of its peculiar concave flared shape.

Last week, when a local businessman, Martin Lindsey parked his “Jaguar” luxury sedan, alongside a pavement on this street, he had no idea that within a short interval of time his gleaming beauty of the car is going to face the so called death rays coming from this building. When he returned, he could not believe that the the door handles, Jaguar emblem and wing mirror on one side of the car had melted and interior panels along one side of the car had buckled. The situation looked as if someone had sent a burst of death rays to the car. 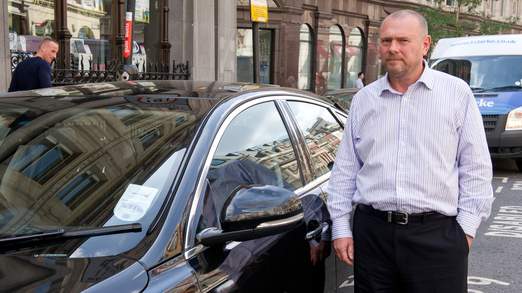 There have been more complaints too. Angry local shopkeepers from the area also say that these so-called "death rays" have blistered their paintwork, singed holes in doormats and caused their tiles to smash. When news of the car damage broke, sweating reporters gathered near the skyscraper. City AM journalist Jim Waterson managed to fry an egg in the glare of the skyscraper by placing a frying pan in direct sunlight. When the temperature was measured at that spot, it turned out to be 92.6F (33.7C). 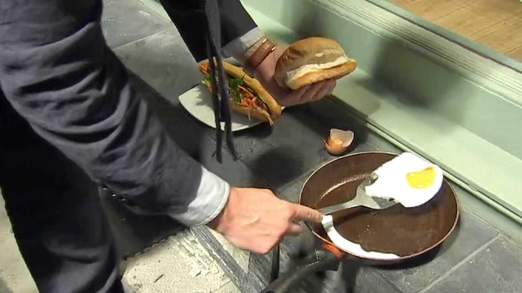 The origin of this patch of intense heat has been traced to the newly constructed building by Land Securities and Canary Wharf. Physicists say that the concave shape of the "Walkie Talkie" is focusing sunlight into a concentrated beam on the pavement and is responsible for the problem. The builders however blame the Sun and say: "The phenomenon is caused by the current elevation of the sun in the sky. It currently lasts for approximately two hours per day, with initial modelling suggesting that it will be present for approximately 2-3 weeks.” This means that every August-September this problem would crop up. The builders have put up cladding and scaffolding to cover the area of pavement on Eastcheap where the Jaguar had melted. They have also liaised with the City of London to suspend three parking bays in the area which are affected. 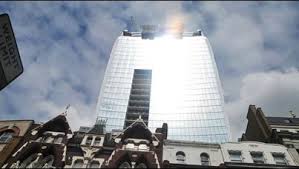 The builders have paid $1700 to Martin Lindsey as compensation for damages to his Jaguar and claim that they would be consulting with local businesses and the City to address the issue in the short-term, while also evaluating longer-term solutions to ensure the issue cannot recur in future. It is however any body's guess, what would happen in future. Most likely, this mega solar cooker, which can be considered as London's newest attraction, would start cooking the city every year in August-September. The tower has now been unofficially renamed, as "Walkie Scorchie" , or as "fryscraper" (HaHa)